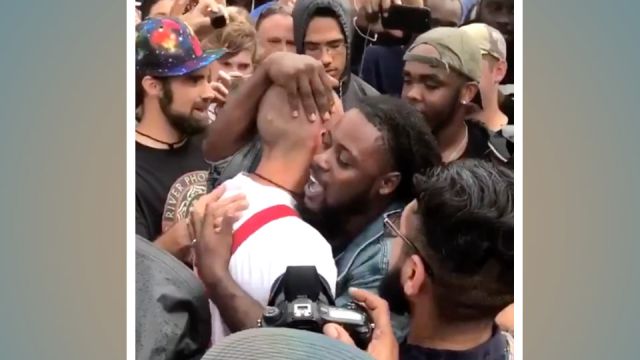 As white nationalist Richard Spencer spoke at the University of Florida, police set up barricades to control the overwhelming amount of protests, both inside and outside of the venue.

In anticipation of the highly controversial event, Florida Governor Rick Scott declared a state of emergency to prepare for possible conflicts, especially only two months after the horrific events which took place between violent political groups in Charlottesville, Virginia.

Many protestors did end up gathering outside, while some went in to protest directly in front of Spencer while he was giving his speech.

Half the auditorium is empty at Richard Spencer event University of Florida in Gainesville. Hundreds took tickets and left. Local bars giving out free drinks for tickets. Cultural cleansing not popular in this Democratic stronghold town. pic.twitter.com/Q14BuT0CSM

As reported in the Tweet above, local bars were giving out free drinks in exchange for tickets to the event, in hopes of driving attendance down while simultaneously pushing a clever marketing campaign.

Based on videos recorded inside the venue, attendance was low and most of the people there were protestors. Outside, hundreds more protested.

In the group of protestors, there were only a few white nationalist counter-protestors. Fortunately, violence was not as bad as originally anticipated. However, one man, later identified as Randy Furniss, was wearing a shirt covered with swastikas and proceeded to clash with the crowd.

In response, one protester named Aaron Courtney started yelling “Why do you hate me?” and asked for a hug. Take a look at the viral video:

Is “hug a Nazi” gonna be the new “punch a Nazi”? He looked mighty uncomfortable #SpencerAtUF pic.twitter.com/o6X8T5wk5x

Here’s another picture of the Nazi clashing with the crowd. Bystanders say he was ferociously punched in the face.

When asked about what took place, Courtney responded, “I could have hit him, I could have hurt him… but something in me said, ‘You know what? He just needs love.’”

Courtney is a 31-year-old high school football coach in Gainesville and claims he first heard about the event when Gov. Rick Scott declared a state of emergence and got a notification on his cell phone.

“I found out about what kind of person he was and that encouraged me, as an African-American, to come out and protest. Because this is what we’re trying to avoid. It’s people like him who are increasing the distance, between people,” Courtney said.

“I reached over, he wrapped his arms around me, and I heard God whisper in my ear, ‘You changed his life’,” said Courtney.

After crowds dispersed, the Gainesville Police Department Tweeted this to thank all of their officers at the scene, while also celebrating their efforts to keep hostility at a minimum for the event.