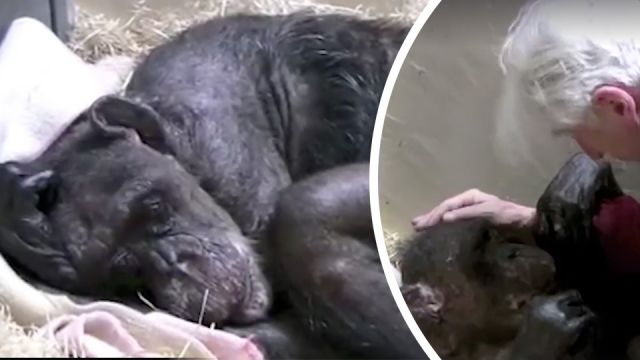 When professor Jan van Hooff reunited with a dying chimp he’d known since 1972, the heartbreaking moment was captured on video. Mama, a former matriarch of a colony of chimps at Royal Burgers Zoo in Holland, refused to eat. That is, until she realized the professor was by her side one last time. Sadly, there’s another side to this story. A story that speaks of animals and endangered species held in captivity for the purpose of entertainment.

When two friends meet for a final farewell

It took a while before Mama, a 59-year-old, deathly-ill chimp, became aware of professor Jan van Hooff’s presence. But when she did, her reaction was enormously emotional. The old chimp, who lay curled up in a ball on her blanket, reacted with joy after recognizing the professor. She seemed to smile, touch his face and even held the back of his neck, bringing his face closer to hers.

Mama, born in the wild, was the first-ever chimp to be raised in captivity, according to the Burger’s Zoo. Mama was not only the oldest chimp in the zoo, but also in the Netherlands and Europe. Born around 1957, the female chimp lived first in a German zoo for many years before moving to the Burger’s Zoo with two other females in 1971.

In his book about Chimps, behavioral scientist Frans de Waal described Mama as “the oldest and arguably most dangerous woman in the group.” Apparently, she rose to fame because of her dominant disposition and influential role in the chimpanzee group at the zoo. After Mama’s death, De Waal said: “She had an exceptionally strong and dominant personality, so that no man who wanted to come to power could do so around her. She will be sorely missed.” De Wall went on further to say, “I have rarely seen such an admirable character in both humans and apes.”

There’s certainly no denying the heartfelt emotion experienced between Mama and Van Hooff, but it still can’t erase the other, darker, side to this story. The story of a dying chimp, plucked from her natural habitat to live-out her final days in captivity.

Zebras, rhinos and other exotic animals giving birth in captivity on webcam — and even a loving reunion between an elderly chimp and man — might make for awe-inspiring entertainment. But should these animals really be taken out of their natural habitats for the purpose of entertaining humans?

Proponents of zoos and captive breeding programs argue that the benefits outweigh the cons. And one benefit may be preservation of dying species throughout the world. The World Wildlife Fund (WWF), after all, reports the rapid loss of species we are seeing today is estimated by experts to be between 1,000 and 10,000 times greater than the natural extinction rate (if we humans were not around). This means, between 10,000 and 100,000 species are now becoming extinct each year! That pretty scary.

But there’s a flip side to zoos and breeding programs

Sadly, the cons outweigh the benefits when it comes to captive breeding, and zoos in general. The problem with captive breeding programs is the mass amounts of animals in captivity. Most facilities don’t have the resources or the space to support larger breeding programs. And even under the “best” circumstances, zoos cannot begin to replicate natural habitats, suggests PETA.

So, when animals are brought into a zoo environment — whether for breeding or entertainment purposes — a change in animal behavior occurs. Animals can no longer do the things that are natural and important to them, such as running, roaming, flying, climbing, foraging, choosing their own mate and simply being with others of their own kind. As a result, major changes take over like a decrease in predator avoidance and foraging abilities, sleep increases and problems develop with social behavior.

Most animals in zoos are not endangered

The bottom line is, most animals in zoos are not members of endangered species. A study published in the journal PLOS found that only 18 percent of land animals in zoo collections are threatened or endangered. And the majority of animals kept in zoos are not being prepared for release into the wild. Actually, it’s almost impossible to release captive-bred animals, including threatened species like elephants, polar bears, gorillas, tigers and chimps.

Another study published in the journal PLOS found that many captive chimps show a variety of serious behavioral abnormalities, some of which may be signs of compromised mental health. In fact, researchers found that abnormal behavior was present among all the chimps studied across six independent zoo-living groups.

This brings us back to Mama, and the likely reason she’s lived out her 59 years in captivity. Once taken to a zoo, there’s really no going back for these animals — not to their natural habitat anyway.

Here’s what you can do

If you want to help support organizations that work to preserve endangered animals’ natural habitats visit organizations like the International Primate Protection League, Born Free USA, and other organizations. Because zoos, even those with the best intentions, teach us that it’s okay to interfere with animals and keep them locked in tiny enclosures far from their habitats. Remember: captive animals that are denied all control over their lives often become depressed and frustrated, and are really there only for our amusement.