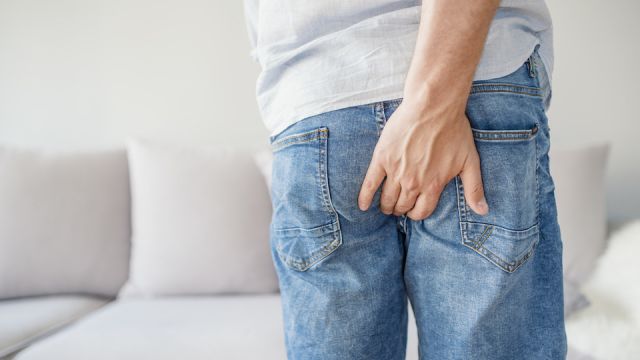 We have all been in places; on a first date, in an elevator, in a car with strangers, on a bus or in a yoga class, when we feel a fart festering. So, what do you do? Most of us tighten our backside and do our best to hold the fart in until we have a private space to let it rip. However, did you know that restricting a fart can actually cause something really dangerous and gross to happen? Read on to find out why it is healthier just to expel gas rather than push it back.

It may seem like the appropriate thing to do to hold your fart back until you are in a private location, but your body will fight you all the way if you do. Dr. Satish S.C. Rao, gastroenterologist, says that you won’t win a battle with a trapped fart.

If you think for a second that pushing back a fart will just make it go away, you are sadly mistaken. It may sneak into the background for a little while, but sooner or later, it will come back with as a force to be reckoned with! Basically, there is no way to keep a fart trapped forever. The good news is, you may be able to buy a few minutes to scurry to a private spot, but other than that, you are like a ticking time bomb and don’t have long before the fart overpowers you. The longer you hold it, the more force it gains. According to Rao, “The anal sphincter will have very little holding ability — it’ll have some, but really not a lot. Eventually, it will make its way out.”

Just when you thought it was bad, it gets worse

Ignore a fart, and something unthinkable may happen. Not all gas is expelled via your anus; some will actually come out of your mouth.  While bad breath is often caused by issues with dental hygiene, sinus infections, and the fermentation of bacteria in the mouth, there are a couple of ways that stinky gas can actually impact your breath. First off, gas can be absorbed through the lining of your gut into the blood. It then makes its way up to the lungs and into your mouth in search of an exodus. What this means is that it is possible to open your mouth and to exhale smelly gas. Pretty gross right?

The second way that gas can make its way out of the body is even more embarrassing. I am not sure which is worse, sending people scattering in a small space or saying hello to a friend and burping out a trapped fart! That’s right trapped gas can bubble up from your intestine and exit the body as a super stinky fart burp. This can happen quickly and without warning, especially if you have eaten a carbohydrate-rich meal, which ferments in the small intestine. When gas is in the small intestine, it is closer to your mouth than your anus and can take the path of least resistance and head up to your mouth. If you have ever smelled a really stinky burp, it is likely that it is actually a fart burp rather than a normal burp!

Holding in a fart can get quite uncomfortable

Besides the stinky result of holding a fart in too long, you can also become very uncomfortable.  Trapped farts cause a build-up of pressure and can trigger abdominal distension and pain. When you eventually let the fart out, it is going to be incredibly uncomfortable.

So, what’s the takeaway here? We all have to expel gas; we all have times when we have to fart. Although you can’t control the formation of a fart, you can always stay clear of gassy foods if you know that you are going to be in company with others. However, if one sneaks up on you, it is better to let it fly than hold it in and let it fester no matter what the consequence.