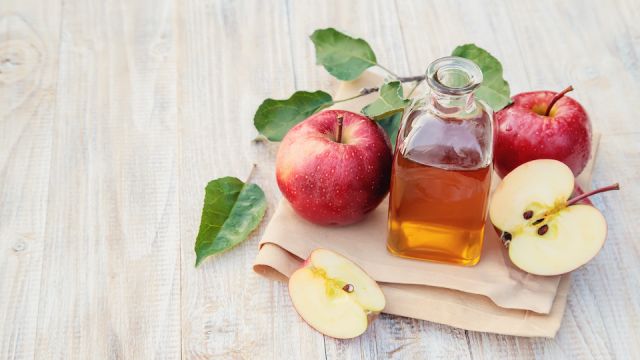 Yes, it is true, apple cider vinegar is officially the queen of the prepper’s pantry. But, you don’t have to be a prepper to reap the benefits of this 100% natural powerhouse. Because it is so versatile, everyone, at all times, should have a bottle, or two at hand.

I am always talking about apple cider vinegar, in the grocery store, at church, and amongst strangers, friends, and family. Why? Quite simply, apple cider vinegar is one of the best all-round natural remedies and good-for-you elixirs I have ever used.

For centuries, apple cider vinegar has been employed as a therapeutic aid for many conditions. There are science-backed, vetted benefits of raw, organic, unfiltered, and unpasteurized apple cider vinegar (ACV). Here are just a few of the reasons why I always have a bottle of ACV handy

I use ACV diluted with water and a squeeze of lemon added in to clean my bathroom and my kitchen counters. I many circles, ACV is known as the safe bleach. You can use the antibacterial powerhouse in your dishwasher, on windows, in your microwave, and even on the windows and mirrors. You can even use it in place of dishwasher detergents.

Apple cider vinegar is excellent for your gut

When apples are fermented in the process of making apple cider vinegar, beneficial microbes are produced. Your gut loves these microbes, and regular consumption of probiotic-rich fermented foods such as ACV can improve digestion, boost your immune system and even positively impact mental health. The majority of beneficial probiotics in apple cider vinegar are found in the strands of “mother” that you see floating in the vinegar.

High blood sugar is a dangerous condition that can lead to several severe health problems such as nerve, kidney, eye, and heart conditions. Studies show that regularly consuming ACV can help keep blood sugar in check. One study found that people who consumed ACV before eating a meal had lower insulin and triglyceride levels after the meal when compared to those who took a placebo. A review of clinical trials has found that persons who consumed ACV for 8 to 12 weeks experienced reductions in their blood sugar levels. Furthermore, a meta-analysis discovered that persons who took vinegar with a meal had lower insulin and blood sugar levels after the meal than those who consumed a placebo.

In a  study, published in Diabetes Care, researchers focused on healthy adults, diabetics, and pre-diabetics. They found that apple cider vinegar improved glucose readings across all three groups. After consuming less than an ounce, researchers observed noticeable effects after consuming a white bagel and orange juice, in comparison to when subjects consumed the same meal but drank a placebo

The individuals with pre-diabetes improved glucose levels by nearly 50 percent. Those with diabetes reduced their blood glucose concentration by 25 percent. With that being said, you do not need to be a diabetic to benefit from improved blood sugar levels. As you better control fluctuating blood glucose levels, you support a longer life span

One randomized, controlled trial published in the Journal of Functional Food found that people who drank apple cider vinegar along with a healthy meal lost a significant amount of weight in 12 weeks. Keep in mind that participants were also on a lowered calorie diet and following a daily exercise regimen. Experts suggest that weight loss benefits of ACV come from its ability to reduce appetite.

Mix two tablespoons of apple cider vinegar in about 16 ounces of water in a bottle, and sip it throughout the day. This practice is linked to fending off cravings, lowering cholesterol levels, and even helping to reduce stubborn belly fat deposits.

Drinking water with a couple of tablespoons of apple cider vinegar throughout the day also has other nutritional benefits besides weight loss. This vinegar contains essential enzymes, is rich in minerals, including calcium, iron, magnesium, and potassium, and helps the body attain an alkaline pH.

Nothing is worse than a sore, scratchy throat. Luckily, when you become ill, apple cider vinegar can come to your rescue. Far too often, as soon as symptoms surface, individuals rush to their local pharmacy for some good old fashion over-the-counter medication. More often than not, these drugs only mask symptoms, increasing your risk of adverse effects.

Apple cider vinegar offers potent antibacterial properties, helping you target an irritated and inflamed throat. Not only will gargling with apple cider vinegar target problematic bacteria but when consumed, this remedy can help restore an optimal pH in the body.

The next time you have a sore throat if you don’t want to drink vinegar, combine one to two tablespoons with water. Gargle this combination, helping to disinfect your mouth and throat naturally. If you’re going to take this route, gargling with warm salt water can also help.

Additional ways to use ACV

Hair rinse – If you are looking to strip your hair of nasty product build-up, ACV can do the trick. Not only does rinsing with a mixture of ½ ACV and ½ water give your hair a clean and fresh look, but it also adds nutrients that promote shine and keep your scalp healthy. I rinse my hair with ACV once a week.

Skin toner –  The anti-inflammatory, antifungal, and antibacterial properties of ACV make it an excellent skin toner. Dilute ACV with two parts purified water and apply it to your face using a clean cotton pad. Rinse with cool water and pat dry. Follow with your favorite organic moisturizer for a fresh and vibrant glow

Produce wash – Combine one cup of ACV with one cup of filtered water and a squeeze of lemon in a spray bottle. Use the mixture to wash produce before eating. Research shows that ACV can reduce the number of Salmonella bacteria on fresh salad vegetables.

Mouthwash – Combine about a teaspoonful of apple cider vinegar with ¼ cup of water, and use it as a mouthwash after you brush. This will destroy harmful (and odor-causing) bacteria in your mouth and help break down plaque.

Flea and tick remedy – Our pets are family members too, and apple cider vinegar has them covered. Add one part apple cider vinegar to one part water in a spray bottle, and spray it generously on your dog or cat’s coat – making sure to avoid the eyes – to help protect against fleas and ticks. Repeat several times a week during flea season.

Have I turned you into an ACV fan yet?