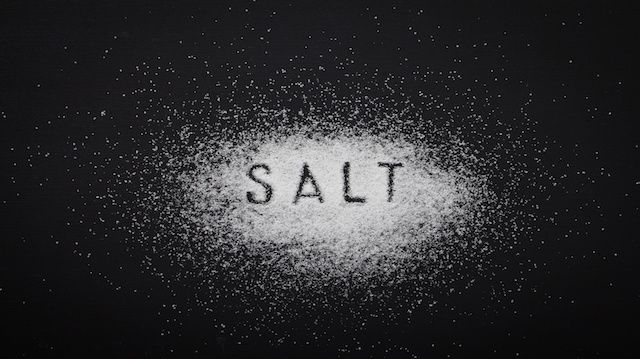 When you bake a nice fluffy sweet potato, what is it that adds that extra oomph of flavor? It’s one of the most basic seasonings, yet people can’t get enough of it — salt, a crystalline substance that seems to make everything taste better.

Over the years, research has delivered mixed results on whether salt consumption is good or bad for our health. Overall, salt has developed a bad reputation, and many individuals are advised to significantly reduce their intake. However, there’s a reason you crave salt — your body needs it. Like many aspects of nutrition, it’s the type of salt you source that makes all the difference.

Salt does not destroy your health — debunking the myth

It’s hard to make the right choices when there’s so much conflicting information. Salt is blamed for heart conditions, hypertension, kidney failure and other serious conditions, so it’s no wonder people are hesitant to satisfy their salt cravings.

The truth is, most people use table salt, also known as iodized salt — a refined, chemically produced compound that is 97 percent sodium chloride. Oh, it’s also bleached — yummy. Unlike other, healthier forms of salt, table salt is not naturally occurring.

There’s a reason saltwater fish can’t survive when placed in a tank of water mixed with table salt: It’s not really “salt” at all. Void of beneficial minerals and full of chemical additives, this is the last thing your body craves. As you can imagine, real salt is what your body wants, and requires, to function at an optimal level.

Report: If You’re Still Running Scared Of Salt, Read This

Whether you source Himalayan, black lava or Celtic sea salt, it’s essential that you say “yes” to real and “no” to synthetic. Also, be mindful of hidden salt in processed foods. The following seven reasons will nudge you in the right direction, helping you better understand real salt’s unjust negative reputation.

You crave salt because…

Regardless of intake, your body works hard to maintain a specific range in terms of sodium and water levels. This regulatory system is complex, involving your kidneys, two key hormones and your brain. Working together, these key hormones and organs regulate fluid balance.

Have you ever heard of athletes drinking salty water? Athletes add salt to their water because they understand that after they have been sweating profusely, they require salt to truly rehydrate. Drinking massive amounts of plain water after endurance exercise dilutes body fluids, resulting in dehydration, cramps and exhaustion.

It is essential for life

Throughout history salt was traded for gold, and for good reason. We need salt to survive. When we consume natural salt, it essentially moves nutrients in and out of our cells. Natural, unrefined salt contains two key elements: sodium and chlorine. While these two elements are harmful to the body individually, when joined together to form sodium chloride, they perform several important functions in the body.

These are both essential for life, as the human body cannot produce them. When consumed through our diet, sodium is critical for the maintenance of acid-base levels and nerve conduction. Chloride also helps maintain blood volume and pH levels, as well as blood pressure, muscular activity, protein digestion and more.

The difference is that natural salt is approximately 84 percent sodium chloride, with the remaining 16 percent comprising naturally occurring minerals, such as phosphorus and silicon — this balance is what provides beneficial properties. Table salt is comprised of around 97 percent processed sodium chloride, and the remaining three percent is synthetic chemicals, such as moisture absorbents.

Sodium is also critical for growth and reproduction. In a 2014 study, published in Pediatric Surgery International, researchers found that infants suffering from ileostomy experienced excessive sodium losses due to abdominal stomas. Urinary sodium levels were examined, and sodium deficiencies were associated with poor growth.

You need it for optimal heart health

Reports show that when consuming high doses of salt — more than six grams per day — individuals can experience increased blood pressure. With that being said, a low intake of salt may be even more damaging — elevating hormones that have been linked to an increased risk of heart disease and death.

A 2014 study, published in The New England Journal of Medicine, found that the lowest risk of cardiovascular disease was based on a moderate intake of salt — approximately three to six grams daily. This was the largest study of its kind, involving 18 countries and more than 100,000 participants. The range of three to six grams daily is what the researchers called the “sweet spot” in terms of optimal consumption.

Within one study, published in The Journal of the American Medical Association, 3,681 participants without heart problems and normal blood pressure were examined. Results showed that those with the highest amounts of sodium in their urine were more than four times less likely to suffer from a fatal heart attack. After following up eight years later, the rate of heart-related death was 0.8 percent for those with the highest sodium levels and four percent among those with the lowest levels.

In terms of nerve functioning, sodium plays a key role in action potentials — allowing neurons to transport electrical impulses from one cell to the next. If you do not consume enough salt, you essentially threaten and hinder nerve communication.

Muscle contractions, for instance, are initiated by the nervous system and would not be possible without sodium, potassium and calcium. For nerve fibers to function, positively and negatively charged ions are required, and this is where salt comes into play. From muscle movement to thought processes, without salt, these functions would not be possible.

It aids in overall bone health

For years, excessive table salt consumption has been linked to cases of osteoporosis. Once again, giving salt a bad rap. Pure, natural salt offers minerals such as calcium and phosphorus, aiding in bone strength. Since unbalanced pH levels also contribute to loss of bone density, this is another key benefit of pure, unrefined salt.

In one 2009 study, researchers examined hyponatremia (a condition where patients experience abnormally low blood sodium levels) in relation to skeletal fractures. Within the elderly population, they found that the incidence of hyponatremia in patients who experienced fractures was more than double that of non-fracture patients. The use of antidepressants was of key interest in terms of a sodium deficiency.

It may act as “nature’s antidepressant”

It is well known that as a society, we eat far too much salt, largely due to the consumption of processed foods. Researchers from the University of Iowa discovered why we crave salt so much — it naturally puts us in a better mood. When rats were deficient in salt, they didn’t take part in activities that they normally enjoy, such as drinking a sugary substance.

This led researchers to believe that a lack of salt can cause one of the key symptoms of depression. Although more research needs to be conducted, it’s clear that low salt intake resulted in a loss of pleasure, one of the major features of psychological depression.

Adrenal fatigue is a major issue within the population, increasing symptoms of fatigue, irritability and, interestingly enough, salt cravings. Once fatigued, the adrenal glands fail to produce adequate amounts of certain hormones, including aldosterone.

At the cellular level, this disrupts sodium balance, increasing your need for natural salt. It’s estimated that one in five people with low blood levels of sodium also suffer from adrenal exhaustion. If you are under immense and prolonged stress, and have intense salt cravings, this could be an indication that your adrenal glands are functioning below the necessary level.

All of these benefits are meant to remind you that salt is not the enemy. With that being said, it is important to be mindful of the type of salt you consume. Eliminating processed foods will reduce your intake of iodized salt — and will have a beneficial effect on all aspects of your health — while incorporating pure, unrefined salt in your diet will offer you the minerals your body requires.

When shopping for sea salt, look for an unrefined sea salt. Unrefined sea salt retains all the natural minerals your body needs. The only sea salt we use in our kitchen is from Ava Jane’s Kitchen. Learn more and receive a special offer today!