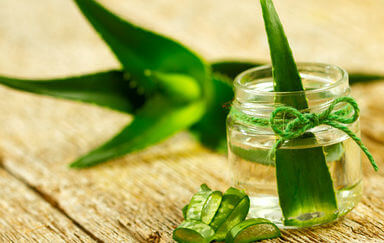 The healing power of aloe vera has been embraced since ancient times. In traditional Indian medicine, it has a history of use for skin conditions and infections, among a plethora of other ailments, while in China, it is employed to combat fungal diseases. In the West, it is known that aloe vera cannot be beat to ease the pain of a nasty sunburn.

One notable benefit of aloe vera is its potential as an anti-aging serum. A study  performed at the Seoul National University Boramae Hospital in Korea sought to examine these effects. Researchers gave 30 healthy female participants over the age of 45 aloe vera gel to apply to their skin, some in high doses, and some in low. The participants applied the gel for 90 days, at which time their facial wrinkles and elasticity were analyzed.

Results of the analysis showed that in both the high and low dose groups, facial wrinkles had significantly diminished, while elasticity was markedly improved in the low dose group. It was not clear why the low dose group had greater improvement in elasticity than the high dose group, and researchers concluded that, “no dose-response relationship was found between the low-dose and high-dose groups.”

It is possible that the dosage discrepancy in the Seoul study was due to the fact that aloe vera is very much intended to be used in its natural form, as opposed to a concentrate mixed into a gel. Pure aloe vera is ready to be applied straight from a cut leaf of the plant. When commercial aloe vera is produced, however, its natural healing properties become compromised.

In their Evaluation of the Nutritional and Metabolic Effects of Aloe Vera , authors Meika Foster, Duncan Hunger and Samir Samman explain that when aloe vera is processed, the whole leaf is first pulverized to produce the juice, and then undergoes processes of filtration and stabilization until the desired extract potency is reached.

The authors write, “this method provides ease of processing and higher efficiency in the recovery of the solids, but it can result in a product that contains little or no active ingredients.” They also explain that heating aloe vera, as often occurs during processing, changes its molecular structure.

Commercial aloe vera gels also often include fillers such as maltodextrin (a corn sugar that likely comes from GMO corn), glycerin, glucose and malic acid, and sometimes an array of other chemicals that you probably do not want seeping into your skin.

Luckily, if you’ve got ample sunlight in your home, growing your own aloe vera is easy. Plant an existing aloe vera plant in a wide pot with well-draining soil. It should be watered generously, but allowed to dry to an inch or 2 deep between waterings.

You can also start an aloe vera plant from a cut leaf. Simply cut a leaf off of a mature plant, at least 3 inches long, and allow it to rest in a dry and warm location for several days to let it form a callus. Once the callus forms, dip the cut end in rooting hormone and bury halfway in soil. Water regularly so the soil stays moist, being careful not to overwater, and in a few weeks, the leaf should grow roots.

To use, simply cut a leaf from a mature plant, squeeze out the gel, and smooth over skin. The cooling sensation is highly pleasant, and the anti-aging potential of the plant may produce significant results in your complexion.