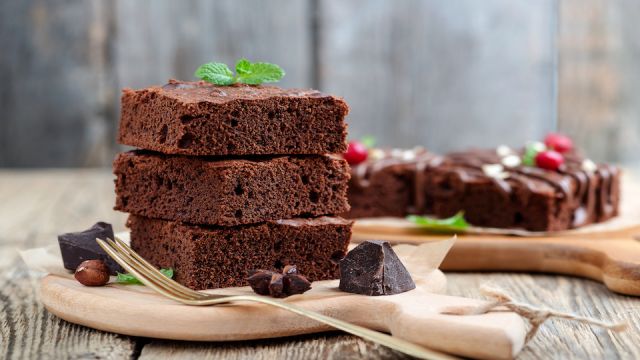 Eggs, oatmeal, fruit and yogurt, granola and chocolate cake? Hmm, the first five items on that list certainly sound like breakfast foods but the chocolate cake? Someone must be playing a joke right? Not! To my surprise, I recently discovered that there is mounting evidence supporting the consumption of chocolate cake for breakfast. Great news for all of us chocolate lovers.

According to research, eating chocolate on a regular basis can improve brain function. Apparently, your cravings for chocolate might be your brain calling out for “fuel for thought.”  There is even a long-term, large-scale study going on at Syracuse University in New York that is measuring the impacts of eating chocolate on 968 people aged 23 to 98 with no change to their regular dietary intake.

Researchers noted that habitual chocolate intake had a positive impact on cognitive performance when measured on an extensive group of neuropsychological tests. In fact, the more frequent consumption, the better the performance.

Eating chocolate in the morning is best for weight loss

Another study out of Tel Aviv University found that eating chocolate was great, but eating it in the morning, every morning, helped people drop weight. According to the study leader Dr. Daniela Jakubowicz, eating a high-calorie breakfast in the morning keeps cravings at bay during the day and curbs late-night snacking.

Not only is a high-calorie breakfast a good option but one that includes sweets is even better. How about dessert for breakfast? Doctors at Tel Aviv University say that metabolism is active in the morning and the whole day is ahead of us to burn off the calories we have eaten. Consuming cookies or chocolate treats such as chocolate cake in the morning along with healthy carbs and protein could help keep you from reaching for sweets later in the day when the chances of you burning them off are slimmer.

Both groups had lost the same amount of average weight per person ( 33 pounds), at the halfway mark. It was in the second half of the study that things got interesting. The group eating the 300 calorie breakfast regained an average of 22 pounds while the group consuming the sweet treat for breakfast lost an additional 15 pounds each.

Both of the groups ate the same amount of total calories per day; however, the participants in the low carb group had far less satisfaction and did not feel full like the group that ate a dessert with their breakfast.

The thought is that the group that had dessert with breakfast would be more likely to keep the weight off long-term because they did not have cravings associated with a sweet treat throughout the day – they just got their treat out of the way in time to burn it off!

A  dark chocolate treat is the best choice

Dark chocolate contains a nutrient called a flavonoid that is found in plant-based foods. Flavonoids are also present in fruits including grapes and apples and red wine. Here are some excellent reasons to include chocolate in your diet – especially for breakfast.

Chocolate boosts energy: A 2015 study published in the Journal of the American College of Cardiology analyzed the effect of dark chocolate on seventeen “sedentary older adults.” Researchers placed eight of the sluggish participants on placebo, while the rest were given two squares of dark chocolate. Researchers then put participants on stationary bicycles to measure their energy levels and lipid profiles as time went by.

According to the results, the dark chocolate group experienced a significant increase in energy levels and the ability to go harder and faster on the bikes. Researchers thought that this effect occurred due to dark chocolate’s ability to enhance energy metabolism in mitochondria and increase mitochondrial “biogenesis.”

Chocolate reduces stress: A 2014 study published in the Journal of the American College of Cardiology measured the benefits of eating dark chocolate on 65 healthy males. Researchers gave 31 of the men a placebo, while 34 ate a small amount of 72 percent Swiss dark chocolate.

The results said a lot about just how potent chocolate’s health benefits really are. According to the study, “the dark chocolate group showed a significantly blunted cortisol and epinephrine reactivity to psychosocial stress compared to the placebo group.” In addition, researchers found that these stress-alleviating effects were not altered by age or weight. This means everyone can benefit from a little soothing dark chocolate when life gets a bit much.

Researchers also found that the reduction in cortisol (a.k.a. the “stress hormone”) gave the adrenal glands a much-needed break. Considering how many people suffer from adrenal fatigue, this is an important finding indeed.

Another study, published in the Journal of Free Radical Biology and Medicine, found that the cocoa in chocolate contains polyphenols which promote healthy cholesterol levels. These antioxidants were shown to “increase the concentration of HDL cholesterol, whereas chocolate fatty acids may modify the fatty acid composition of LDL and make it more resistant to oxidative damage.”

Chocolate slows the aging process: It’s a well-known fact that dark chocolate contains a wide range of health-promoting antioxidants. What isn’t so well-known is chocolate’s apparent ability to slow the aging process, due to its high concentrations of flavonols. Researchers in a 2015 study found that these nifty compounds “reduce some measures of age-related cognitive dysfunction, possibly through an improvement in insulin sensitivity.” Essentially, eating dark chocolate can protect your brain from the ravages of aging.

Here is a dark chocolate cake you can feel good about eating for breakfast or anytime for that matter. Thank you to Beth at The First Year for this fantastic recipe.

Are you ready to have your chocolate cake and eat it too?