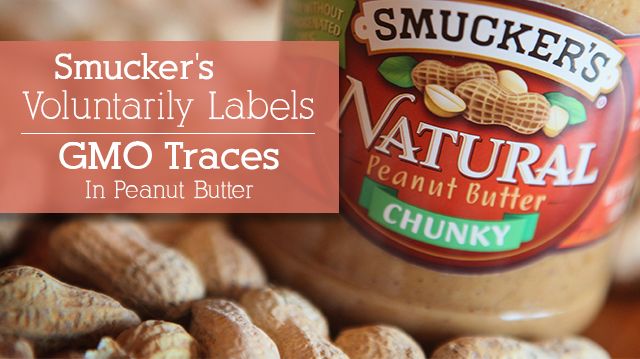 At The Alternative Daily, we’ve reported on the growing demand for GMO transparency and labeling — polls say that about 90 percent of Americans want GMOs clearly labeled. Since the passing of Vermont’s labeling law last year, more and more companies are voluntarily labeling GMOs in their products.

We’ve seen bigwigs General Mills, Kellogg’s and Mars begin putting labels on their products, and Smuckers has joined them by adding a GMO annotation to their Natural Creamy Peanut Butter.

The “trace amounts” mentioned are potentially traces of GMO cotton, since peanut crops are often rotated with cotton crops. This means that GMO traces may be present in the peanuts. Peanuts themselves are not a GMO crop — yet.

Since GMOs have to be labeled in Vermont starting in July 2016, companies can no longer sell their GMO-containing foods if they are not labeled. Not surprisingly, Kellogg’s, General Mills, Smucker’s and others do not want to lose Vermont business.

Smucker’s certainly isn’t labeling GMOs because they believe in food transparency. They have spent big money fighting state GMO labeling initiatives. The Organic Consumers Association has a boycott in place of all Smucker’s products, until the company decides to stop fighting labeling efforts.

While it’s wonderful that more and more companies are labeling GMOs, we hope that a national labeling law is passed soon, so that we can all know what’s in our food, and make our own choices as to whether or not to eat it.

The trace amounts of GMOs aren’t the only problem with processed peanut butter. Many contain sugar and a variety of unhealthy oils. Smucker’s Natural Creamy Peanut Butter only lists peanuts and salt as the ingredients, but there’s still the issue of refined, processed salt — and those potential GMO traces.

On top of that, there is the ever-present risk of contamination during manufacturing and processing. The Food and Drug Administration (FDA) allows a certain percentage of insect parts and other “contaminants” into the mix. Yuck.

Peanuts do have a variety of health benefits, including protein, healthy fats, fiber, B vitamins, vitamin E, a range of minerals, and a wealth of antioxidants. One of these antioxidants is resveratrol, which has been linked to potential anti-aging benefits. However, if peanuts are stored too long and become moldy, they can be home to aflatoxins, which are linked to raising the risk of liver cancer.

If you crave peanut butter, all you need to make it at home are some organic peanuts, organic coconut oil and some unrefined sea salt. Your best bet is to find a local source for peanuts, to ensure that they are fresh and have not been sitting in storage growing carcinogenic mold.

Start with equal parts peanuts and coconut oil. Chop the peanuts in a food processor, add the oil and blend. Add sea salt to taste, store in a container in the fridge or freezer, and enjoy.

As an alternative to peanut butter, try other types of homemade nut butters, such as this recipe for pumpkin spiced nut butter. It’s delicious and GMO free!