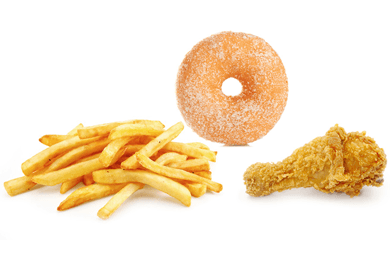 It is always sad to discover that some of our nation’s favorite comfort foods are detrimental to our health.  French fries, fried chicken and donuts have been American staples for generations, and although most people know that these foods are not high on the nutrition scale, they are still among the top fast foods consumed.  However, new research has unearthed new and troubling side effects of these delights:  they can cause cancer.

The carcinogenic culprits found in french fries, fried chicken and donuts are very similar.  All three of these foods contain high sugar content, hydrogenated oils which contain trans fats, and acrylamides, a by-product of frying with high heat.

In his May 2009 lecture entitled Sugar: The Bitter Truth, Robert Lustig, a researcher at the University of California, San Francisco, School of Medicine, states that aside from being an empty calorie, sugar is “a poison by itself.”  In lab mice and rats, it has been clearly shown that if fructose enters the liver in a significant quantity and at a significant speed, it is mostly converted into fat.  This process triggers a condition called insulin resistance, the key underlying factor in obesity, heart disease, type 2 diabetes, and many forms of cancer.  French fries are packed with high fructose corn syrup, as is the batter used to coat multiple forms of commercial fried chicken. The standard store-bought donut contains between 200 and 300 calories, mostly from sugar.

The ill effects of trans fats, the synthetic components of fatty acids created during the production of margarine and cooking oils, have long been feared.  Consuming them can lead to coronary heart disease, worsen the quality of breast milk in lactating mothers and set the stage for various aggressive cancers.  Most french fries are high in trans fat, especially McDonald’s french fries, which have been recently found to contain a 33 percent higher trans fat content than previously reported.  Fried chicken is also often a source of these “bad fats.”  Donuts are the worst in this area; they are composed of 35 to 40 percent trans fat.

A common factor linking french fries, fried chicken and donuts is the process of deep frying, which produces acrylamides.  Acrylamides have been shown to cause cancer in lab animals, and specifically possess a strong link to prostate cancer.  A study conducted at the Hutchinson Center revealed that men who ate deep-fried foods at least once a week increased their prostate cancer risk by 30 to 37 percent.  The toxic effects of acrylamides are enhanced with a longer frying time and the re-use of oil.

It remains to be seen whether the disturbing connections being found every day between foods such as french fries, fried chicken and donuts may cause Americans to finally re-examine the risks involved in indulging in these beloved cancer-causing snacks.  Hopefully, they will start to seem less and less like “comfort foods,” and we will turn towards healthier options.

Have you cut out these 3 foods yet?