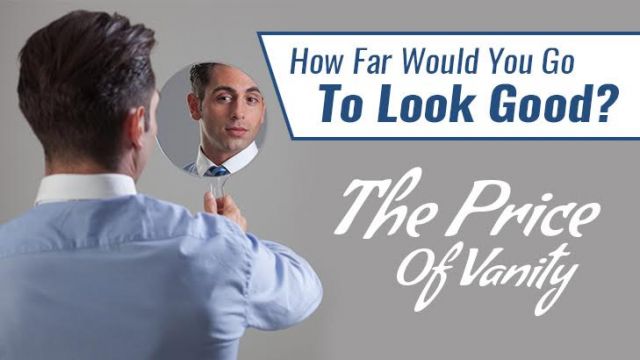 What happens when beauty and perfection skew? Are we really such a beauty-obsessed culture that we would risk our lives for the pursuit of looking good? For one man, the answer is a resounding yes. But how far would you go to achieve your image of beauty?

Karl Dinis is so obsessed with looking good that injecting himself daily with an illegal drug to obtain the perfect tan is par for the course. Dinis’ drug of choice is the untested synthetic drug Melanotan 2, which is not currently approved and has potentially dangerous side effects. In fact, a US Food and Drug Administration (FDA) warning letter suggests Melanotan 2 increases the risk of developing moles and may be linked to serious eye and heart problems. Another side effect, which may be unwanted — or maybe even wanted in Dinis’ case — is libido enhancement and spontaneous erections.

But for Dinis, achieving the right shade of skin far outweighs the risk of eye and heart problems, or spontaneous erections. Although Dinis was originally frightened when he first started taking the drug seven years ago, and experienced sickness and hot flashes, today he says he isn’t scared by the reported side effects of using Melanotan: “It’s nothing I’ve not heard before. I think I have taken it for so long, if there were going to be long-term effects I would have had them by now,” said Dinis to UK TV channel ITV’s This Morning.

For some, Dinis’ tanning obsession seems somewhat vain and bordering on “nutty.” Yet, for others who relate, taking a pill or injecting themselves with something potentially dangerous doesn’t seem that far-fetched.

From breast augmentations (the second-most performed surgery worldwide) to toebesity surgery (surgery to remove fat from your toes), some people will go to any lengths for beauty.

And when it comes to implants, there are no guarantees about how long they’ll last, or if your breast tissue will atrophy, suggests instamedia. In addition, change in breast sensitivity, asymmetry and deformation are common. And before you run out to get the fat sucked out of your toes anytime soon, be aware of the dangerous effects such as infection, negative reaction to anesthesia, pain and unsatisfactory results, which could require even more surgeries.

Body image is a big issue

It’s no secret that media plays a big role in how we perceive ourselves. A survey conducted by the National Institute on Media and the Family for the University of Washington, looked at young girls and how media affects body image. Forty percent of girls nine and 10 years old have tried to lose weight. And apparently by age 13, 53 percent of American girls are unhappy with their bodies. By the time girls reach 17 years of age, 78 percent are unhappy with their bodies.

Last year, blogger Em Ford began posting images of herself without makeup on social media, and the video went viral with over 20 million views, but the criticism and hostile response she received was painful to watch.

The old evolutionary argument that suggests fit, attractive and virile wins the race when it comes to survival and procreation does hold some truth. Unfortunately, the extremes to which we have taken the idea of beauty is a far stretch from evolutionary benefit. Our shallow idea of beauty negatively affects girls and women.

My own personal obsession with beauty spans from my teens. So, I am certainly not one to judge any woman or man striving to accentuate their own beauty. But when it comes to injecting yourself with drugs, consuming potentially deadly pills, unnecessary surgeries or plastering on makeup — for me, that absolutely crosses the line.

It’s not crazy or self-centered to want to improve your looks, but when that pursuit becomes so obsessive that you can’t risk being seen without a full face of makeup or full-on tan… then it’s time for a little introspective soul-searching. I’ve met some hot-looking people who are pretty darn ugly on the inside. Perhaps it’s time to turn our focus inward instead of outward.