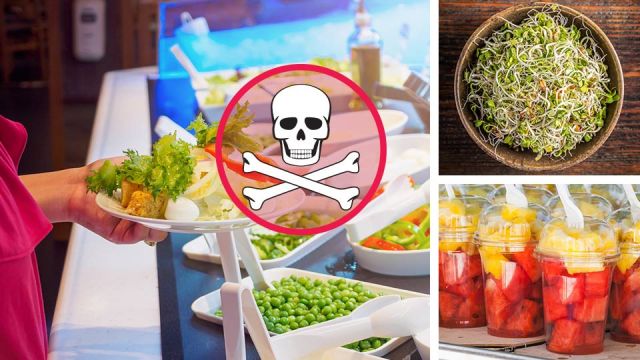 A painful rumble in your stomach makes you break out into a cold sweat. You clutch your gut anxiously as you try to recall what you ate that could be the culprit for your current gastrointestinal mayhem. When the pain is accompanied by you hurling your insides into the toilet and unspeakable amounts of embarrassing diarrhea, your second question becomes, “Do I have food poisoning?” You just might, and here are the foods that probably caused it.

One in six people get food poisoning every year

Food poisoning is not as uncommon as some may believe. The Centers for Disease Control and Prevention (CDC) estimates that each year roughly one in six Americans (or 48 million people) get sick, 128,000 are hospitalized and 3,000 die from foodborne diseases each year in the United States.

CDC researchers have identified more than 250 foodborne diseases. The majority of food poisoning cases are linked to infections, caused by different bacteria, viruses and parasites. The top five germs likely to make you sick are norovirus, salmonella, Clostridium perfringens, campylobacter, and Staphylococcus aureus.

It can be tricky diagnosing food poisoning, as the symptoms can be similar to other health issues, such as the flu. Determining common sources of foodborne illnesses is the number one step to preventing yourself from spending the day hovering over your toilet in agony. Read on to discover which foods cause the most cases of food poisoning and how you can prevent those pesky symptoms.

According to WebMD, ground chicken can contain salmonella, a dangerous bacterium that exists in the intestines of birds, reptiles and mammals. Salmonella can be deadly to humans. If exposed to salmonella, you can be plagued with symptoms such as fever, stomach cramps and diarrhea.

Steak connoisseurs aren’t off the hook just yet! Steak can also be a source of food-borne illness. There are many people, like myself, who prefer their steaks to be medium or medium rare. However, did you know neglecting to cook a steak to at least 160 degrees Fahrenheit can be harmful? I shed a tear writing this because a good, juicy, medium-rare steak is on my list of the best food known to man, but play it safe and go for a well-done temperature. Cooking all meat well done is the safest bet!

Once upon a time, I heard someone say that there is no need to wash fruit because it comes from the earth. I added that statement to my list of silliest things I’ve ever heard. Washing fruit is extremely important! You should never eat your fruit without washing it first. When it comes to fruits with crevices, especially blackberries, strawberries and raspberries, they definitely need to be washed before to remove any excess dirt, bacteria and pesticide residue.

I like to wash my fruits the good old fashion way with water and a bit of vinegar, however, you can also opt to purchase this affordable solution to clean your fruit and veggies.

Tell your man to listen up! Most people assume because flames are involved with grilling that all germs are automatically killed. That is not the case. Research has shown that dirty grills contain tons of disgusting bacteria. Food particles left on the grill can spoil, which can leave behind bacteria that can make you sick the next time you fire up your grill.

Make sure your hubby is scrubbing the grill after every use and letting it burn to ensure any excess bacteria is killed. Keeping your grill racks clean is essential for a successful cookout. Start by brushing off food debris with a wire grill brush. Then remove the racks and wash with warm soapy water. After firing up the grill, make sure to brush the racks with a little oil to prevent food from sticking. Let the racks burn for a while before adding your food. You should be cleaning your grill entirely, inside and out, every four to six months depending on how frequently you grill.

No matter how old you are, a spoonful of raw cookie dough screams “fun times.” Hey, adults deserve to have fun too! However, tread with caution. This seemingly harmless delicious treat is known to consist of raw eggs that may harbor harmful bacteria, like salmonella. Consuming any foods that have uncooked eggs and flour can be detrimental to your health. Make sure to always cook eggs thoroughly.

Is your raw dough eggless? Steer clear! Raw dough without eggs can still be harmful due to the possibility of raw flour containing E. coli. The FDA and CDC, along with state and local officials, conducted an investigation into the dangers of eating raw dough. The investigation revealed dozens of people across the country were poisoned by a strain of bacteria called Shiga toxin-producing E. coli O12.

So, when you start jonesing for some raw cookie dough, try the safe alternative of a scoop of cookie dough ice cream to satisfy your craving.

Crab, oysters, shrimp and lobster can be covered in food poisoning-causing bacteria, even before being yanked from the water! Shellfish should always be cooked and never consumed raw. As tasty as raw sushi is, try cooked sushi as an alternative, such as shrimp tempura rolls or veggie rolls — it’s much safer.

You know the feeling of excitement you get while standing in the deli line? You peek around the person standing in front of you to eye the seemingly endless options of deli meat, toppings and condiments. You think to yourself, “I’m about to make the greatest sandwich the world has ever witnessed.” However, you may want to think twice. Many deli items, like soft cheese, contain Listeria monocytogenes bacteria. This type of bacteria is also very common in prepared pates, deli salads and sliced deli meats.

Leafy greens can harbor many germs that exist in the soil and water. And because leafy greens are often consumed raw, they become a playground for deadly bacteria, like E. coli, that hide on the surface. Greens are also more likely to be cross-contaminated with bacteria from nearby raw meat during the prep stages of your meal.

If you start experiencing the common symptoms of food poisoning, such as nausea, vomiting, stomach cramps and diarrhea, see a doctor immediately. According to the CDC, younger children, older adults and pregnant women are high-risk groups for developing food poisoning.

Your favorite foods aren’t off limits, just proceed with caution while preparing and storing afterward.