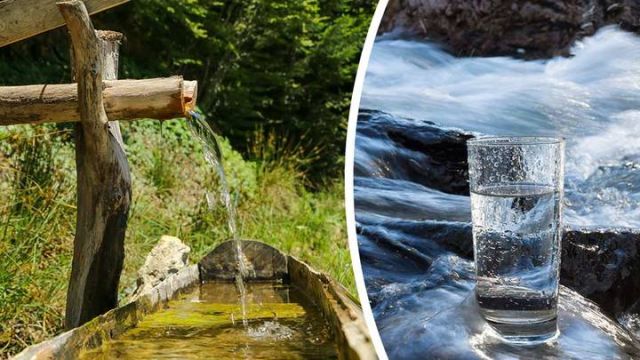 According to Mukhande Singh, the founder of a company called Live Water, “You’re drinking toilet water with birth control drugs in them” if you’re getting your H2O from a tap.

Why some people prefer raw water

Singh is part of a growing movement that believes in something called “raw water,” which essentially means water from off-the-grid sources including natural springs, rain and supposedly pristine aquifers.

Proponents of raw water include many prominent Silicon Valley entrepreneurs and health activists. They claim that public water supplies are often hopelessly contaminated by lead and chemical additives like fluoride. They also believe that tap water has been so extensively treated and filtered that it no longer contains beneficial minerals and microorganism.

Most public water is treated and filtered (as is most bottled water). Filtration methods used include UV light, ozone gas and chloramine disinfection. Adherents of raw water, however, believe that those techniques kill healthy bacteria (which are good for your digestive health). The end result, they insist, is “dead water,” which lacks both the taste and health benefits of the real stuff.

Another big issue for advocates of raw water is fluoride, which has been added to public water supplies since the 1950s to help prevent cavities. Most scientists insist that the fluoride is safe at the levels it is added (and that it is effective in reducing tooth decay).

But water purist question fluoride’s dental benefits. Some also believe that the chemical makes people more docile and is a form of mind-control. For instance, Singh says, “Chloramine, and on top of that, they’re putting in fluoride. Call me a conspiracy theorist, but it’s a mind-control drug that has no benefit to our dental health.”

Environmental scientists warn about the dangers of raw water

However, many environmental scientists, health advocates and public health officials are very skeptical of the raw water movement. For instance, Sarah Parcak, an archeologist and TED Prize winner who grew up drinking well water on a family farm posted this very skeptical take on raw water on her Twitter feed:

Apparently people are rushing to get "raw water." Just wait till they get "raw cholera". https://t.co/rorvv3xOFy

Dr. Donald Hensrud, the director of the Healthy Living Program at the Mayo Clinic in Rochester, Minn agrees. In his view, “Without water treatment, there are acute and then chronic risks.” The hazards he’s referring to include E. coli bacteria, viruses, parasites and carcinogens that can be found in water that is untreated and unfiltered. As Dr. Hensrud explains, “There’s evidence all over the world of this, and the reason we don’t have those conditions is because of our very efficient water treatment.”

Raw water is expensive and has a short shelf life. A gallon of the stuff can easily fetch $20 or more and it will turn green (on account of the natural algae in it) within a month or two. Right now, the evidence is scant as far as the health benefits of raw water go.

For example, as Vince Hill, head of the Waterborne Disease Prevention Branch at the Centers for Disease Control and Prevention (CDC) in Atlanta explains, “The basic benefit of drinking water is hydration — that’s how it benefits our bodies, improving our mental process and bodily functions.”

Hill adds that “There’s not much data on whether water helps provide microbes for digestion and things like that. What we do think about when we think about microbes in water [are] germs that could cause diseases. That’s why we talk about treating water, filtering water, disinfecting water to make it safer — the data we do have is more about the disease-causing effects of microbes in our water.”

In fact, contaminated drinking water causes more than 500,000 deaths worldwide every year according to the World Health Organization. Both science and history suggest that getting sick from raw water appears to be a clear and ever-present risk while the benefits of raw water are far murkier.

Would you drink raw water? Let us know in the comments!