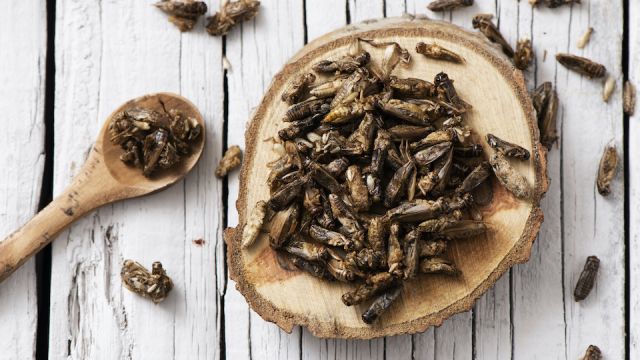 For most of us, this food is the stuff of nightmares – something from a horror movie or a reality show eating challenge. But for some, it holds the future of human survival.

Cricket protein addresses many of the challenges facing our food supply today. And while they may seem ‘disgusting’ to us, insects are an ancient protein source that has been a part of the human diet for millennia. Today they are consumed in many countries around the world. Although they are not commonly considered part of the Western diet, other cultures consider them a delicacy.

Whether you want to try crickets because of culinary interest, you’re seeking a more sustainable diet, or you need more of certain hard-to-find nutrients in your diet (such as vitamin B-12 and omega 3s), crickets could be the answer. Ready to learn more about this unusual and intriguing food? Let’s dive in.

More than 2 billion people around the world eat insects as part of their regular diet. In Mexico and Latin America, bugs are part of the normal snack selection. In Asia, you can buy crickets and scorpions in the markets, seasoned just like potato chips. When you consider that this widely available and time-tested food is also a good source of protein, vitamins, minerals, and healthy fats, it becomes clear that crickets hold promise as a sustainable food of the future.

Insects use only a small fraction of both water and land resources compared to traditional livestock. They can also be more efficient to raise than meat substitutes, including corn, rice, and soy.

While cows use 13,400 gallons of water per pound of edible protein, crickets use only 240 gallons and produce 1 percent of the greenhouse gases that cows produce.

“Raising insects for protein not only helps protect the environment but also offers a more healthful option than meat in many wealthy countries with high-meat diets. “

Let’s delve a little more into the nutrition benefits of crickets.

The nutritional benefits of crickets

Crickets are high in protein

Many edible insects, including crickets, offer a higher proportion of iron that is available for use in the body as compared to common “iron-rich” foods like beef and spinach.

Crickets are rich in omega 3’s

We all know that omega 3 fatty acids are good for our brains and overall health – but these healthy fats are overshadowed by omega 6 fatty acids in the western diet, which can lead to increased inflammation and disease. Crickets contain an optimal balance of omega 3 to omega 6, and offer up high levels of EPA and DHA, which are commonly found in fish and fish oil.

Cricket products contain a high amount of prebiotic fiber, which is an excellent way to proliferate the diversity of gut microbes in your body. One study found that eating a breakfast containing 25 grams of cricket protein every day for two weeks led to an increase in the number of beneficial gut bacteria like Bifidobacterium animalis, a strain that has been linked to improved gastrointestinal function and other measures of health.

According to bug-eating proponents, crickets actually taste pretty good. They are said to have a subtle ‘nutty’ flavor that combines well with many popular foods and seasonings.

Here’s how you can start eating crickets

For now, eating bugs may be mostly a novelty, but it seems likely that things will change as the insect farming economy evolves, and public perception catches up to the need for sustainable protein. In the meantime, here are some viable ways to start using cricket products in your daily diet.

If your interest has been piqued, check out your local health food shop for cricket products, or order some cricket flour online. You might be pleasantly surprised by just how good this “disgusting” food tastes – and you’ll be making a difference too.