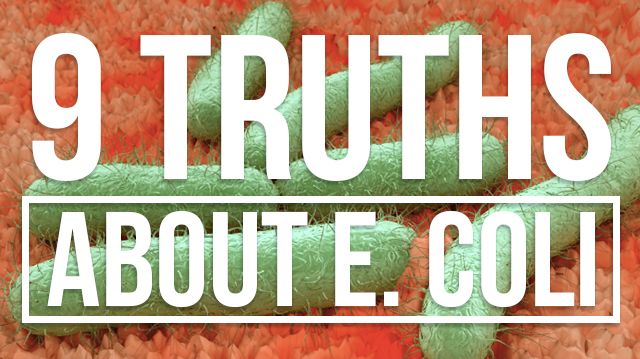 You may not realize it at the time, but after eating or drinking bacteria, problematic symptoms may arise days later. When you suddenly become ill, vomiting or experiencing diarrhea, you often think, “What did I eat?” You think of one or two questionable food items, then remember hearing about E. coli on the news.

E. coli can be ugly— what is it, and where does it come from? Once consumed, what effect does it have on the human body? It’s important to uncover the truth about E. coli so that you can protect yourself.

Here they are — 9 truths about E. coli

Escherichia coli, more commonly known as E. coli, is a bacteria that affects the gastrointestinal tract. Some strains are more serious than others, which we will get into momentarily. The following nine facts will help you better understand this highly common bacteria — it’s critical to be aware of risk factors and possible complications.

Truth #1: Some strains are more serious than others

E. coli is one complex bacteria — some strains will not cause any symptoms, whereas some may be fatal. You can think of this bacteria as various dog breeds: They are all the same organism, but differ in terms of their traits. In fact, most E. coli live and thrive in your gut without causing harm.

In 1993 and 2006, a Jack in the Box and spinach outbreak occurred, respectively, due to the strain known as O157:H7. The letter “O” identifies a marker on the surface of a particular strain that is found in hundreds of shapes. The “H,” on the other hand, is a marker of the tail-like feature E. coli uses to “swim” around.

Exclusive: Is E. Coli The Special Ingredient In Your Burger?

Shiga toxin–producing E. coli (STEC) are essentially bacteria that produce a harmful toxin. STEC is a group of bacteria strains that may result in severe disease. In 2011, Europe experienced an outbreak due to a strain of STEC known as O104:H4.

There are believed to be around 200 different types of E. coli that produce Shiga toxin — 100 of which are associated with human disease. Within North America, when we hear of an E. coli outbreak, O157:H7 is the most common STEC — yet, around 50 percent of STEC infections are non-O157.

Children under the age of five and the elderly population are most susceptible to haemolytic uraemic syndrome (HUS), characterized by kidney failure, neurological symptoms and bleeding. Approximately eight percent of E. coli patients develop this syndrome, with a death rate of around three to five percent.

Truth #4: The infective dose is low

It doesn’t take much to become infected, and in many cases, individuals will not become noticeably ill for three to eight days. Remember, this bacteria cannot be seen with the naked eye, yet some researchers suggest that as few as 10 cells can infect a human, possibly leading to fatal complications — this is dependent on the strain.

Truth #5: E. coli can be caused by contact with infected humans or animals

Yes, water and food, such as contaminated sprouts and raw beef, are the most common causes, however, E. coli may also be spread from person to person, or animal to person. Remember, certain individuals, such as the elderly, young children and pregnant women are the most susceptible.

If handling animals, for instance, practice good hygiene, and if someone is ill, keep your distance until they recover. Those who do become infected will generally recover within five to 10 days. In the meantime, maintaining hydration is essential.

We’re already facing issues regarding antibiotic resistance, and in terms of E. coli, there’s no evidence to suggest that antibiotics are an effective form of treatment. One study, published in Infection, found that UTIs caused by E. coli were highly resistant to common antibiotics. Some have argued that antibiotics can make symptoms worse when aiming to treat E. coli.

Truth #7: Some E. coli are beneficial

As mentioned, most E. coli are harmless and often grow within your gut. In some cases, they’re even beneficial, helping to synthesize vitamin K and B-complex vitamins. They can protect your gut against harmful colonies of bacteria and even assist in digestion and food absorption.

Truth #8: E. coli can exchange genes with other bacteria 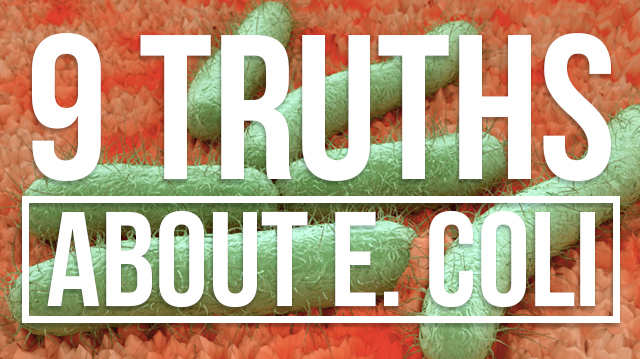 One strain of E. coli can essentially exchange genes with other strains or even other bacteria, resulting in new traits. This was the case in Germany, regarding the E. coli O104:H4 outbreak. It was found that a less harmful strain gained genes from an STEC — infecting thousands and killing 53 individuals.

For those who source their water from a private well, especially those around cattle farms, may be at an increased risk. If a well is shallow, for instance, flooding or agricultural runoff can lead to infection. In terms of the common O157:H7 strain, simply bring water to a rolling boil for approximately one minute.

For those who are at elevations above 6,500, three minutes is recommended. Allow to cool before storing in sanitized bottles to refrigerate. Since E. coli tends to thrive anywhere between seven degrees and 50 degrees Fahrenheit (optimum temperature is 37 degrees Fahrenheit), boiling water kills all strains.