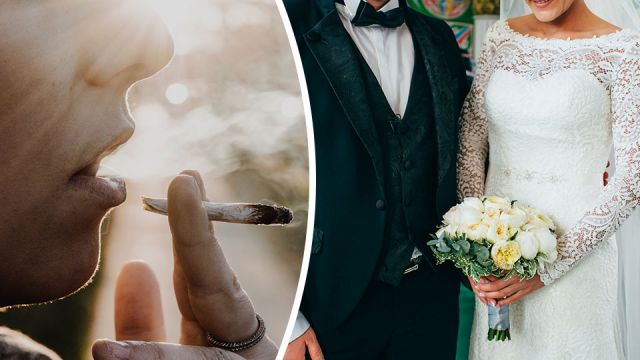 Weed-themed themes weddings are a new trend that is getting a lot of buzz. Once upon a time, the very idea of toking up at the altar would have raised eyebrows among older guests. It also would have served as an open invitation to wedding crashers serving warrants.

No doubt, the last thing any bride wants on her big day is to have the cops cuffing the groom moments after he’s finished a bong hit with his buddies (but before he’s had a chance to say “I do”). Weddings are tense enough, but having to bail out your future hubby so you can still make your honeymoon would be a major buzzkill.

Nowadays, at least in states where recreational marijuana is legal, cannabis-themed nuptial ceremonies are becoming an increasingly popular (and socially acceptable) way for couples to tie the knot. Indeed, the way things are going, unity bongs, eco-friendly hemp fiber gowns and bouquets laced with buds could well be mainstream all across the country in a matter of years.

It’s not your grandma’s wedding anymore

In the past, champagne toasts and open bars have been a central part of wedding ceremonies. In contrast, getting stoned was something couples did in dorm rooms before watching midnight movies.

But that is all changing. Marijuana is not just moving mainstream, it’s going upscale. In Colorado, for example, wedding planners, caterers, limo services and others are increasingly tailoring their services to clients who want to incorporate cannabis right into the festivities.

State laws can still be a little tricky, even where pot is legal, which means that couples will typically have to supply the weed they want to dispense and display at their wedding. But as Bec Koop, one of the founders of Ire Weddings & Events explains, there is a budding movement afoot that “is simply making it more acceptable to enjoy cannabis as part of a group in a social setting at a wedding.”

You are never too old to get high

As you might expect, couples can choose the degree to which they integrate cannabis into their wedding activities. Understandably, many brides and grooms do not want to tick off parents or grandparents, who may not share their enthusiasm for a substance that is still illegal under federal law.

According to anecdotal reports, however, many older wedding guests have shown a decided curiosity for cannabis edibles. For instance, Bec Koop recounts a story involving an 82-year old grandmother. “We gave her a small dose of [a cannabis-infused] blueberry soda, told her exactly when it’d kick in and what to expect, and next thing you know she was dancing and having a blast,” said Koop.

What cannabis-themed experience is right for your event?

Some couples want to make cannabis the center of their wedding event while others decide to make it a marginal attraction. For hardcore weed aficionados there are “unity bowls,” which allow the bride and groom to enjoy a bong hit at the exact moment they are tying the knot — talk about taking your love higher.

Of course, many couples will opt to be more discreet. For them, private smoking lounges (where guests can inhale comfortably but inconspicuously) are a very popular option. However, walk-up bud bars (where guests are presented with a menu of cannabis or edible options) are becoming the most favored choice since they appeal to both connoisseurs and curiosity seekers alike.

What you need to know about having a weed wedding

Weed-themed weddings are quite new, but event firms specializing in this budding practice are cropping up in the eight states where pot is now legal. Nevertheless, brides and grooms still need to be cognizant of certain things.

For example, marijuana is generally far less of a liability than alcohol, but you still need to be aware that guests can have bad experiences. Knowledgeable budtenders and bridal organizers can help you plan ahead so that everyone stays safe and happy.

In particular, you should look to budtenders to supply the expertise to help calm any user who might have a bad reaction to a cannabis product. For instance, most will know to recommend soothing chamomile tea to anyone who might be a little jittery after ingesting pot for the first time.

Also, even in states where marijuana is legal, not every reception venue will be comfortable with guests smoking pot on the premises. Therefore, it’s imperative to plan ahead so that you comply with both the local law and the policies of the specific venues you are renting. Of course, cannabis-themed wedding planners will be familiar with these issues and can help couples navigate them.

Weed weddings are growing in popularity

Wedding experts insist that we’ll be seeing a lot more weed-themed weddings in the future. For now, it’s still a rather novel development. So, be prepared to BYOC (Bring Your Own Cannabis) while letting marijuana-themed event planners guide you through the process of organizing and arranging your special occasion.

In the past, toasting a couple with champagne was a traditional wedding ritual. Nowadays, couples are getting toasted too… on sinsemilla, Maui Waui or Bubba Kush. Indeed, integrating cannabis into your event could lead to an occasion that is especially intimate, personal and meaningful. Just think, toking together on the altar could be just the thing to bring your love to a higher level.