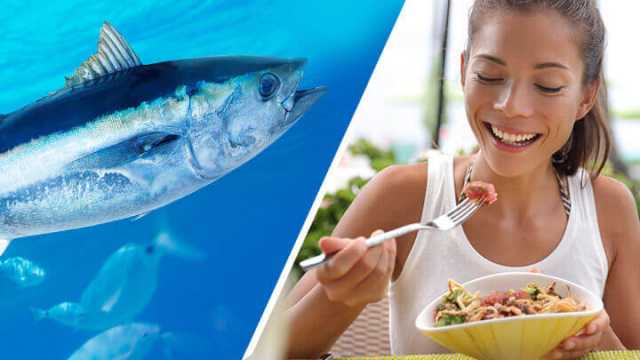 For those of us who like seafood, we know that you can’t always get your hands on the freshest fish. Whether it’s the exorbitant cost of fresh-caught fish at your supermarket, or the fact that you’ve basically got to eat it straight away or it’ll go off, it doesn’t always make the most sense to buy fish from the deli. That means you’ll be taking a trip down the canned goods aisle. And while you might occasionally buy a can of pink salmon or clams to mix things up, statistics show that you’ll almost always go for the canned tuna.

In fact, records show that canned tuna is the second most popular variety of seafood in America, close behind shrimp. That puts canned tuna ahead of salmon, tilapia, pollock, cod and the whole spectrum of other popular seafood varieties. Clearly, canned tuna is a force to be reckoned with.

And it’s not without reason. Aside from being relatively mild in taste and therefore easy to integrate into a range of dishes, tuna is actually an excellent source of protein. By providing all 10 amino acids required by our bodies, canned tuna is a complete protein. Not only that, canned tuna provides a decent amount of omega-3 fatty acids. Sure, it’s nothing compared to salmon or sardines, but it’s a whole lot better than a lot of the other omega-6 heavy meats found in the average American diet.

The problem is, there’s a dirty secret hidden in your canned tuna. To help canned tuna prices remain so dirt cheap, there’s a certain amount of corner-cutting that the tuna industry has introduced to reduce their overheads. And while those cut corners certainly make tuna affordable and accessible to everyone, they’re also destroying our oceans… and in many cases your health.

Read on to find out why you should really do your research before you buy your next can of tuna, and what to look out for.

Fish aggregating devices (FADs) are a fancy-sounding name for something which is, in theory, quite simple. FADs are built on the knowledge that open-ocean fish are attracted to floating objects. Over time, these objects begin to grow plants and algae, which attract smaller fish, and the smaller fish begin to attract larger predators. Those predators include tuna, which flock to these FADs as they represent an all-too-attractive food source.

Now that’s all well and good if the floating object is something natural, say a stray coconut on a trans-Atlantic migration or a palm frond. But tuna fishermen are releasing their own, synthetic versions of these objects into the sea — objects which have a radio beacon attached to project their location to the fishermen. After leaving these devices for a while to create their own mini ecosystem, fishermen will head back to their FADs, throw nets into the water and scoop out anything which has the misfortune to now be calling it home.

While this technique dramatically increases the catch-rate for tuna, it also greatly increases the bycatch rate of other species. They’re essentially scooping up an entire ecosystem and leaving it to die, and this could include anything from tiny invertebrates to endangered sharks and dolphins. Each time they scoop out a FAD and it’s inhabitants, they’re significantly reducing the biodiversity of the ocean.

You may not have heard of FADs until now, but chances are you’ve heard of longlines and the destruction they can wreak on the ocean. Sadly, unless they specify otherwise, most of the cheaper brands of canned white (albacore) tuna are using longlines to catch your tuna in the cheapest way possible.

So what does a longline setup actually look like? Essentially, it’s a thick rope or cable suspended between two buoys in the open ocean. Smaller leaded fishing lines are attached to this longline at regular intervals, at the end of which is attached the actual hooks and bait. A tuna fishing boat can set up many long lines over the course of a day, and return to the lines at the end of the day and reel them in.

The problem is, like the seine nets used for the FADs described above, these long lines aren’t selective. The bait on these hooks attract all manner of species other than the target species (white tuna), and for this reason they’re one of the most prolific killers of turtles, albatross and other seabirds which are attracted by the bait but then drown when they get snagged by the hooks. Unlike your average single-line fisherman, who reels their catch in as soon as it gets on the line and can release it immediately if it’s not their target species, turtles, seabirds and other unfortunate creatures may be impaled upon these longline hooks for hours, sometimes days at a time before they’re hauled in.

And by then, it’s too late.

Once again, the solution to avoid buying longline-caught tuna and boycott this devastating practice is simply to only buy products that guarantee the tuna was caught via pole-and-line.

In the fishing world, the good intentions and maximum take-based quota systems can mean diddly squat if fishermen decide to fish outside a country’s exclusive economic zone (EEZ). These zones extend 200 miles off the coast of any given nation, meaning that beyond the EEZ lies a part of the ocean that is governed by no man.

Similar to the pirates of yesteryear, today’s tuna fishermen head out into these lawless waters to make their fortune pillaging the ocean of as much tuna as they can get their hands on.They can use whatever fishing technique they want, catch as much as they want, and impose a level of damage upon ocean ecosystems that would never be allowed within an EEZ.

If you care about the ocean and it’s inhabitants, only buy canned tuna that’s caught inside managed EEZ waters.

What else is hidden in that canned tuna?

Besides the environmental travesties that are lurking within many of the canned tuna available these days, there’s another dirty secret… and this time it’s harming your health.

If you take the time to check out the ingredients listed on any given can of tuna, you’ll likely discover that tuna and water aren’t the only things in there. Most companies preserve their tuna and bulk out the packaging with hydrogenated, rancid oils like soybean or canola oil. There might also be artificial flavorings, preservatives and who knows what else. They’re nasty ingredients that harm your cardiovascular health, increase inflammation in the body and degrade your digestive health.

Worst of all, there’s absolutely no need for them! Tuna that’s simply canned in water or a light brine can stay just as fresh. It is also loads tastier than tuna that is swimming in nasty oils and preservatives. Keep it simple, and both your health and tastebuds will thank you.