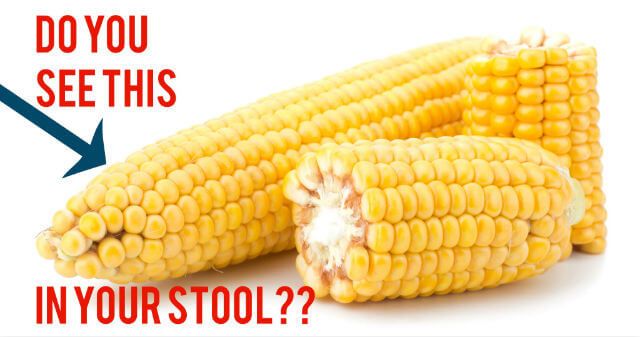 It may seem that any discussion with poop as the main attraction is best suited for a couple of youngsters. However, while you may not choose poop as a topic for tea time, it should not be altogether ignored, either. Your poop, whether you know it or not, reveals a great deal about your overall health.

Not all food is completely broken down during the process of digestion, but if you can fully identify the remains of foods you have eaten for breakfast, lunch or dinner in your poop, you may have a digestive disturbance that needs to be addressed.

The process of digestion works somewhat like an assembly line, and when some part of the line is compromised, it’s time for diagnosis and repair.

It’s all in your gut

You have probably been told that something is “all in your head,” but what about being told that something is “all in your gut?” Gut distress is incredibly common in America. In fact, the National Institutes of Health (NIH) report that over one quarter of all Americans suffer from digestive disorders. Something so simple as consistently spotting whole, undigested food in your feces could be a warning that your digestive assembly line is out of whack.

The gut has been called the “second brain” or “other brain,” due to its powerful influence over health. The digestive system contains nearly 500 million neurons, along a 30-foot track with an area the size of a tennis court that starts at your esophagus and ends at your anus. This intricate and highly intelligent human plumbing system is often neglected, and eventually, like all plumbing, ends up clogged or in some other state of disrepair.

Problems with the gut manifest themselves in a multitude of seemingly unrelated ways. However, once you have a better understanding of how the gut actually functions, it will be easier to grasp why so many bodily processes are utterly dependent on its health for their health.

Food fuels the body, and the digestive system is like the engine that burns the fuel and distributes energy throughout the body, while eliminating waste. This very finely tuned system works wonderfully when the fuel is of superior quality.

However, if the fuel is second-rate or does not get properly broken down by the stomach, pancreas, liver, gallbladder, small and large intestines, we become weak and ill.

Your intestines are alive

Much about the way you treat your intestines may change once you realize that they are living organs in the same way that your heart is a living organ. They are not a series of connected, inert tubes, but rather part of a living system that absorbs, sends signals, secretes and metabolizes.

We can choose to eat whatever we want, be it meat, vegetables or even a dozen Twinkies. However, our intestines are going to react differently to everything that we put into our mouths. If we pay close enough attention, we can tell whether or not our intestines are happy with what we have eaten. The problem is, we just don’t listen closely enough.

The power of enzymes

In addition to stomach acids, we need a healthy supply of digestive enzymes in order to break down, absorb and assimilate the nutrients in our food. Spotting whole food in our stools may be a good indication that we don’t have enough enzymes to properly break down the food we eat.

A word about corn

Corn is the exception to many foods we eat when it comes to digestion. Contrary to what you may think, seeing corn in your stool is not a call for alarm. Many people think that when they see corn in their poop, they are not digesting it.

However, what you see is simply the tough outer shell of the corn, which we don’t have the enzymes to break down. The internal nutrients of the corn kernel are actually broken down and absorbed by the bloodstream, leaving the rather useless outer shell to be excreted.

What do enzymes do?

Enzymes do the hard work that keeps cells in our bodies working correctly. There are three basic forms – metabolic, food and digestive.

Metabolic enzymes flow throughout the bloodstream and help cells metabolize glucose and other chemicals for maximum energy and function. These enzymes can be found in some raw foods. However, most metabolic enzymes are created in the pancreas.

Food enzymes are contained in the foods we eat. If you eat raw organic foods, you get the highest level of food enzymes possible. Cooking foods removes many enzymes, making them more difficult to digest.

However, when foods contain little natural enzymes, are cooked or are not well chewed, the pancreas has to work overtime to create enough enzymes to process nutrients from foods when they are consumed.

An overworked pancreas results in inflammation in this vital organ. Additionally, if your pancreas is not working correctly, it does not release enough enzymes to remove waste products and break down inflammatory residue from your body. As a result, your body begins to work less efficiently at fighting off the effects of aging, which also opens the door to disease.

Many people also don’t realize that as we age and our bodies are exposed to stress, our enzyme supplies are threatened. Every ten years, our enzyme production is decreased by about 13 percent. By the time we reach 40, we could have about 25 percent less enzymes, and at 70 we could have as little as one-third the amount of enzymes that we had as children.

Besides seeing undigested food in our stools (other than corn), other signs that you may have a reduced number of enzymes are:

Partially digested food in the body can cause a number of health problems, such as allergies and autoimmune reactions. A number of essential vitamins, amino acids and minerals are not absorbed, resulting in nutritional deficiencies.

Carbohydrates that are not properly digested may result in abnormal gut bacteria, which pose a number of serious health threats. Undigested fats can cause deficiencies in fat soluble vitamins A, D, E and K.

How to build up your enzyme count

Building up your enzyme counts is a great way to ensure that your body has what it needs to break down and absorb the essential nutrients in the food you eat. Here are three ways to help improve your counts:

Chew your food: Chewing slowly and methodically helps increase saliva, which contains enzymes needed to break down carbohydrates. Saliva also contains antibacterial properties. When we chew, we also decrease the surface area of our food so that it is easier for the digestive juices to further break down. Once the food begins to be broken down, the stomach starts to produce hydrochloric acid and this, in turn, sends a message further down the digestive tract to get ready to work.

Consume more raw foods: Raw foods are good for you for a number of reasons, including the fact that they are packed with antioxidants, essential vitamins and minerals. Another important factor is that raw food, sometimes referred to as live or living food, has not been cooked or exposed to temperatures over 118 degrees, which destroys or deactivates natural enzymes.

So, the next time you use the bathroom, take a peek to see what undigested food has slipped through the digestive assembly line. If you consistently see food (other than corn) in a whole state, try implementing some of the tips we have suggested. Your body will thank you.