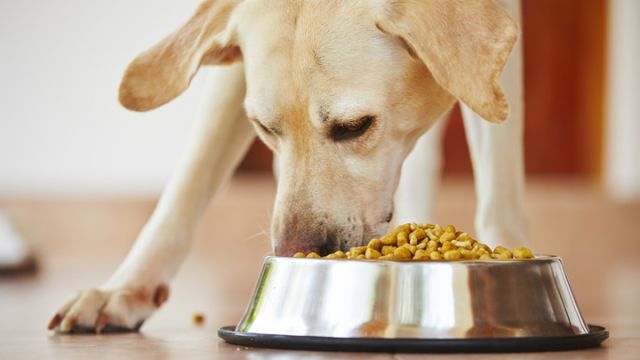 There’s a reason the Labrador retriever has long been the most popular purebred dog in the country. Labs are smart, friendly and easy to train. What’s not to love?

Well, there is a downside to this great breed. If you share your life with a lab, you know your dog has a voracious, insatiable appetite. He’ll consume the inedible – socks and stones come to mind – as easily as actual foodstuffs. There’s also a reason for that: it’s in his genes.

Researchers at Britain’s Cambridge University have discovered many labs lack all or part of the proopiomelanocortin, or POMC gene, which plays a role in regulating weight. POMC helps signal to the brain the “balance between energy from food taken into the body and energy spent by the body,” according to the United States National Library of Medicine. Without the proper balance, eating and weight are out of proportion. Labs eat so much because their brains are never telling them they’ve eaten enough food for their energy needs – they are simply always hungry.

While most other breeds do not have this genetic deficiency, it is found in the flat-coated retriever, a dog related to the lab and much like it in appearance. The flat-coated retriever, however, is nowhere near as common as its lab cousin, coming in at number 90 on the American Kennel Club’s list of most registered breeds. The country’s most popular purebred also spawns a lot of mixes, so if your mutt looks lab-like and has a bottomless pit of a stomach, suspect a POMC issue.

First World dogs, like their First World owners, are becoming increasingly obese. The prevalence ranges from approximately one-third to 60 percent of dogs, and labs tend toward the higher end. Interestingly, the estimated percentage of pet-owning households in the U.S. and overweight/obese people is the same – 68 percent.

Labs are naturally good-sized dogs. Ideally, a male lab weighs between 65 to 80 pounds at maturity, with females weighing between 55 to 70 pounds. If your lab weighs substantially more than that, he’s too fat.

You can eyeball and touch your lab to figure out if he needs to lose some weight. Looking from above, you should definitely see a waist. His entire body should not be the same width. Feel his ribs – you should feel them, but not see them, in a healthy dog. If you run your hands along his ribcage and can’t find his ribs, he needs to go on a diet.

Labs are often used as guide dogs, search-and-rescue animals and in other service-related positions. One reason they are so good at these tasks is they are easily trained, and are especially responsive to treat rewards. Now, the dog who doesn’t respond to a treat reward is the exception, but labs may take it to a whole new level.

Fat labs are at higher risk for a variety of health issues. These include:

An overweight lab is less likely to reach the average life span of 12 to 14 years enjoyed by a lab of normal weight.

Fortunately, labs are an active breed. Lots of walking and running can keep him – and you – in good shape. Since labs are so easily trained, find an activity you both like to keep your dog moving and motivated. Consider agility, Flyball, tracking, even dock diving – a water-loving dog’s favorite. Labs do well at almost every canine sport.

Feed your lab a good quality dog food and count calories. Adult labs require about 30 calories per pound of bodyweight daily, while less active, senior labs do well between 20 and 25 calories per pound. Choose a food consisting of at least 25 percent protein, with active dogs needing more than that. Talk to your vet about the ideal weight for your pet and monitor his weight regularly. A very active dog may need more daily calories, while a couch potato needs less. Some older labs remain quite spry, so they might require a higher caloric intake.

Adjust your lab’s food intake according to his exercise regimen. If he isn’t getting as much exercise, cut back. If he’s exercising a great deal, he needs more calories. Avoid those pleading brown eyes at the dinner table or while you’re snacking. It really is for his own good.