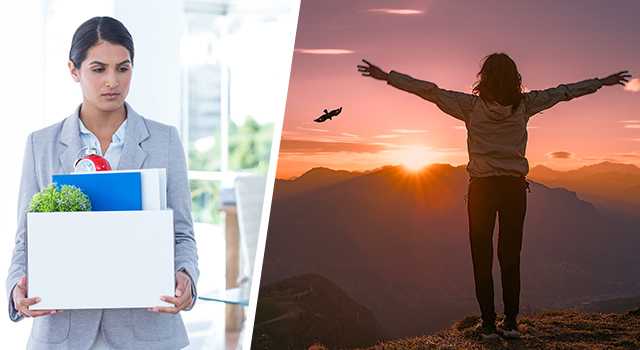 Much like your first heartbreak or first fender bender, getting laid off feels like an inevitable rite of passage, albeit a pretty crappy one. For me, in my nine years post-college, I have had this happen not once, but twice. Now, I must admit, that both times were the result of the entire company closing so I was in good company, even if I was no longer a part of a company. Still, it did not make the initial sting and subsequent wave of shock much easier to be surrounded by scores of colleagues — or rather, former colleagues.

However, while I was at very different places in my life when these events took place (24 years old the first time, this past January the second), both days played out roughly the same. A bleary-eyed HR Director, clearly exhausted from having to deliver the same bad news over and over again, thrusting a COBRA packet, thick as the Old Testament, into my hands and reminding me that I was going to “be okay” and I’d be compensated through the end of the day (oh, how generous). However, as I sit here typing this post, reminiscing about the feelings of anxiety and depression I felt in the subsequent days, when I would sit on my computer at Starbucks, scrolling my LinkedIn profile for new opportunities, I can honestly say that I did end up okay. Pretty great, in fact.

So, if you’re like I was, teetering on the brink of feeling completely hopeless but wanting to believe that the next “big thing” is around the corner, listen up: it might not feel like it right now, but once you’re back to working again (and you will be) you’ll realize that this period of in-between was actually an integral, necessary part of your growth.

For me, getting laid off, twice, was the best thing that ever happened to me. Here’s why:

It forced me out of my comfort zone

My first “real” job came at 21 years old, right out of college. I was working for a local start-up TV station, running around town reporting on various lifestyle and trend stories in the area. I attended gallery openings, celebrity-studded parties, international events — the kinds of experiences that I thought would last forever. Unfortunately, I was not able to see what was right in front of me: a company hemorrhaging money, run by people with only a few more years on me and hardly more experience.

When it shuttered its doors, just over three years after I started, I remember feeling as though I was never going to find a job again. In fact, I had never even had to find a job before, having been hired directly from an internship position. All of a sudden I was thrust into a world of writing resumes, connecting with recruiters, going on job interviews — things I had no experience doing prior. Yet, it was a time where I was forced to work to find work. I grew up more in the months between jobs than I had in the three plus years I had been working.

It taught me a lesson in humility

I have a personality flaw that puts way too much emphasis on what I do for a living and how it relates to my own self-worth. I pride myself on working and sharing with others what I do for a living. So, when I lost my job — even through no fault of my own — I took it very personally, feeling as though my “unemployment” status may as well be a scarlet letter pinned to my chest.

However, as time wore on, I was able to see that I am so much more than what I do for a living. I am a daughter, sister, friend, lover, cat-obsessed fitness fanatic with an occasional penchant for too much pasta and wine. Defining myself specifically by what it says on my paystub does a disservice to all of the other facets of my personality — most of which I love more than working. Besides, once I was able to admit to myself and to others that I was unemployed and not sure what I was going to do next, I found that those around me were better able to connect and empathize with me. There is no shame in saying you don’t have everything figured out. In fact, most people prefer it.

It allowed me to enjoy free time and explore new passions

When the company I was recently working for closed in January I did not even give myself a moment to grieve before I was back on the hunt. Hours and hours were spent pouring over job postings, recruiter websites and constantly refreshing my inbox and LinkedIn profiles. It became so automatic that I found I was doing it from the moment I woke up until the moment I fell asleep (and even in the middle of the night when I would be surfing a wave of anxiety-induced insomnia).

The entire cycle left me bereft, sleep-deprived and angry that people could have the audacity to not respond to my inquiry 30-seconds after clicking “send.” After a few weeks, I decided I needed to change my approach. I would tackle looking for a job as though it was a job. I would allow myself a few hours in the morning, followed by a midday break, before going back online in the afternoon, closing my computer by 6 p.m.

Additionally, I began to use my free time to do all of the things I had wished I was able to do when I was working full-time. For example, I visited with family members, poured my energy into exercising and cooking (two of my passions) and even began volunteering at a food pantry feeding the homeless. I also began writing again and created a YouTube channel. All of these things I had wanted to do but felt I never had the time to when I was working. Now, with too much time on my hands, I was harnessing my energy into things that made me feel fulfilled — even if it wasn’t filling my bank account.

It introduced me to new people and experiences

After my first layoff years ago, I was fortunate enough to begin working full-time at a new company less than two months later. Unfortunately, it was in a different industry than the one I had come from (advertising sales versus television and video production). I found myself sitting in a cubicle ten hours a day coordinating print and digital ads, all the while dreaming about the fun TV shoots I was never going to be a part of.

However, the silver lining was the people I worked with at the office. I formed close relationships with my colleagues and my boss, enjoyed office parties, happy hours and the wonders of something called “Summer Fridays.” I also learned valuable work experience that I was able to translate to a job years later that required someone with a skill set that included agency experience — something I never would have had without that job.

When I was given an opportunity to go back into television one year after starting at the agency, I took it. But saying goodbye to the wonderful people who worked there was one of the hardest professional experiences I have had to date.

It made me appreciate having a job

This lesson might sound a little bit “preachy,” but I truly believe that once you go back to work after a long unemployment, you are naturally inclined to appreciate working that much more. All of a sudden a 6 a.m. alarm clock doesn’t seem so terrible because you’re getting up, getting dressed and getting back into the swing of things.

Now, that’s not to say that feeling lasts forever. Sooner than I imagined, I was back to wishing I had slow mornings and no need to get dressed or brush my teeth all day (hey, it happens, okay?). But, I was also so thankful to be back in my career, doing what I love to do and making it a living. Even issues that would have bothered me years ago — a longer commute, a micro-managing director, having to ask to take vacation — didn’t seem so bad compared to how I felt when I wasn’t sure what the next day would bring.

Sometimes we need to experience a low point so that we can build ourselves back up to the top. During this time I am reminded of something a friend said to me years ago, during my first bout of unemployment: “Sometimes you have to hit rock bottom to know that the only place to go is up.” Well, these days, I’m flying high.