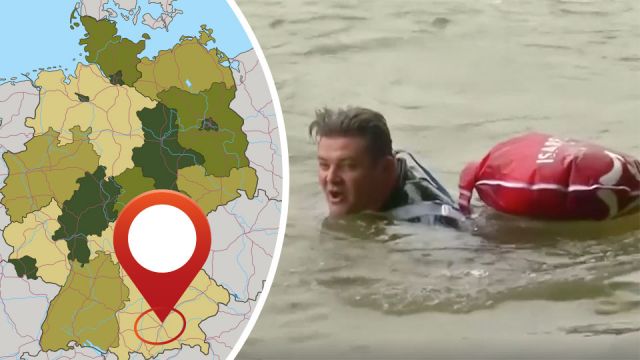 Benjamin David of Munich, Germany has a pretty ingenious way of getting to work in the morning. Take a look:

That’s right… instead of spending long stretches of time sitting in a car, getting leg cramps and cursing at other drivers, David zips up his wetsuit, tosses his clothes and laptop into a waterproof, floating bag, and jumps straight into the Isar River.

According to him, this is the ideal way for him to get to the beer garden where he works. On his scenic river commute, David commented, “It is beautifully refreshing and really the fastest way.”

Although he used to get to work by either biking, walking, driving or public transportation, he found that traffic made these commute styles take longer. To save himself some precious time (and frustration), he began swimming. No traffic, crosswalks or red lights in the water, after all! David even has special insulated wet suits that keep him warm during winter swim commutes. That’s some dedication!

Commute times are on the rise

While jumping into a river to swim to work every day may seem a bit extreme, take a moment to think about how horrible it is to be stuck in traffic… especially for hours on end. We’ve all very likely been there — I don’t know a single person who has never had the experience of being wedged in the middle of a long line of stopped cars, no movement on the horizon. What’s worse, commute times in the United States have been significantly increasing each year, and commutes of over 90 minutes are rising at the quickest rates of any other commute length. Ugh.

I remember a trip I took with my family to California some years ago; we ended up standing in traffic for about three hours while trying to get past Los Angeles on the interstate. This is not uncommon… and some people have to experience this traffic purgatory each and every day, twice a day. Los Angeles has been documented as the most congested city to drive in, but other large cities, such as San Francisco, New York, and Seattle, are close behind. It gets worse: some people live so far from their workplace that their only practical solution is to fly to work.

Sitting in traffic is harming your health

Not only is sitting in traffic highly discouraging and agitating, it can have negative consequences to our health. Along with sore legs and shoulders (and a hoarse voice from shouting at other drivers), long commutes bring with them exposure to air pollution and the many dangers of extended sitting. The fact that we as a nation are spending more and more time commuting to work is debilitating on many levels.

With all of this in mind, Benjamin David’s swimming to work idea seems like a great one, indeed. Not only is he shaving time off of his commute, he is exercising in the process, and enjoying the benefits of nature and fresh air. If you have a river, lake, stream or beachside stretch of ocean in your city, would you ever consider swimming to work?