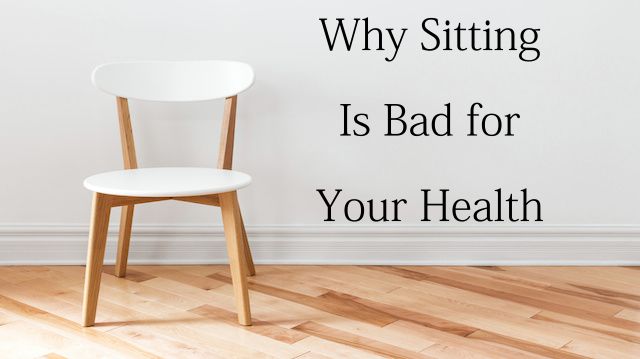 As a culture, we spend so much time sitting. Think about it: many of us sit in our cars (or on buses) on our commutes to and from work, we often sit in chairs for hours at a time when we get there, and then we sit on the couch or in a computer chair when we get home — staring at a screen for hours on end. Of course, there are exceptions — but on the whole, most of us could stand to spend a lot less time sitting down.

Aside from the fact that time spent sitting cuts into time we could be spending exercising, sitting down itself has been linked to some truly scary health problems. As we reported previously, Dr. Anup Kanodia of Ohio State University has even coined the phrase, “sitting is the new smoking,” to illustrate the gravity of its dangers.

In one study, described in the above-referenced article and published in the British Journal of Sports Medicine, researchers found that every hour spent sitting and watching television shortens lifespan by 22 minutes. Smoking a cigarette was linked to an 11-minute decrease in lifespan — half the risk of sitting for an hour in front of the TV!

Research has long known that there are numerous physical consequences that stem from sitting too much for too long. These range from relatively minor aches and pains, all the way to serious chronic illnesses and even cardiac incidents. To add insult to injury, new research is finding that a sedentary lifestyle can have highly detrimental mental consequences, as well.

A new study, just recently published in the journal BMC Public Health, has linked sedentary behavior, such as sitting for long periods of time in front of screens, to an increased risk of developing anxiety.

According to Megan Teychenne of Deakin University, the study’s lead researcher, “Anecdotally, we are seeing an increase in anxiety symptoms in our modern society, which seems to parallel the increase in sedentary behaviour. Thus, we were interested to see whether these two factors were in fact linked.”

For their study, the researchers analyzed nine studies centered around the connection between sedentary behavior and anxiety. The breadth of the studies analyzed included children, teenagers, and adults. Some of the studies were relatively large — over 13,000 individuals — while others were smaller.

On the results of their analysis, the study authors wrote:

“These findings are similar to those found in previous reviews that have assessed the relationship between sedentary behaviour and other specific mental health outcomes such as depression.” So, not only can sedentary behavior potentially make our minds nervous, it may also bring us down into the depths of despair.

As to some possible reasons why sedentary behavior was linked to anxiety, Teychenne and her colleagues hypothesize that time in front of screens can lead to metabolic issues, deterioration of social bonds, and time away from necessary sleep. These factors combined, they say, may then spurn anxiety.

Regarding the physical effects of “over-sitting,” the authors of a 2012 study published in the Annals of Clinical and Laboratory Science summarize:

“A sedentary lifestyle is a very serious worldwide problem, especially in North America and Europe. Unfortunately, physical inactivity, which has progressively increased over the past several decades, significantly increases the risk of numerous diseases/disorders, including several forms of cancer, diabetes, hypertension, coronary and cerebrovascular diseases, overweight/obesity, and all-cause mortality, among others.”

“Unless there is a reversal of this sedentary lifestyle, the incidence of these diseases/disorders will increase, life expectancy will decrease, and medical costs will continue to rise.” Yikes.

It is especially disturbing to think of the effects of a sedentary life on younger people, who may be afflicted with these health issues at a younger age, and are also likely to continue their sedentary behavior through their adult years. On top of the potential for serious health problems, some research has linked being sedentary with lowered academic performance.

A 2011 study published in the International Journal of Behavioral Nutrition and Physical Activity reviewed 232 studies focused on the relationship between various aspects of health and sedentary behavior. The studies analyzed involved nearly one million children and teenagers between the ages of 5 and 17. On the results of this large-scale review, the study authors wrote:

“There is a large body of evidence from all study designs which suggests that decreasing any type of sedentary time is associated with lower health risk in youth aged 5-17 years. In particular, the evidence suggests that daily TV viewing in excess of 2 hours is associated with reduced physical and psychosocial health, and that lowering sedentary time leads to reductions in BMI.”

The dangers of extended sedentary behavior go even further than the above-listed troubling research suggests. Some other dangers of too much sitting include the following:

It is clear to see that if we spend much of our days sitting, we need to do something about it, lest our health — both physical and mental — may very well suffer.

Break the cycle of sitting — at home and at work! 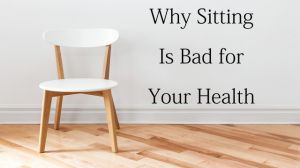 At home, we often have more choice over when we sit and for how long than we do at work. While many of us tend to plop down on the couch and flip on a television show after a long day of work, try switching it up! Go outside with your family instead, and take a long, relaxing walk! Or, to reinvigorate yourself, you may try a run, or even an exercise class! There are many to choose from.

If you do sit down and watch some TV or surf the web, make sure to get up and stretch at least every half an hour. Better yet — watch while standing, doing some yoga stretches, or doing some strength exercises. That way, you’re not sedentary, and you’ll be getting the benefits of whatever activity you’re performing!

During your regular day, there are other ways to avoid sitting for so long. If you’re talking on the phone, walk instead of reclining in a chair. If you have a bathroom upstairs and one downstairs, consider walking up or down the stairs to the one that’s furthest away, just to get in that extra movement.

Overall, reducing screen time for everyone in the family is probably one of the best ways to encourage movement and discourage extended sitting!

At work, we may have less options — especially in an office environment — however, that does not mean you have to succumb to the dangers of prolonged sitting! If you drive to work, try to park as far away from the building as possible, to get a little morning and afternoon walk in. Just like at home, make sure to get up and stretch — or better yet, walk around! — at least every half an hour. Try taking a walk during your lunch break, and take the stairs instead of the elevator whenever possible.

If you’re willing to take the extra initiative, you may even talk to your employer about considering standing desks, which have been a huge hit in many offices around the world, and may help to encourage optimal productivity. There is also the treadmill desk option, so you can actually walk while taking calls and clicking away at your computer!

However you accomplish it, the less time you spend sitting, the better for your overall health!