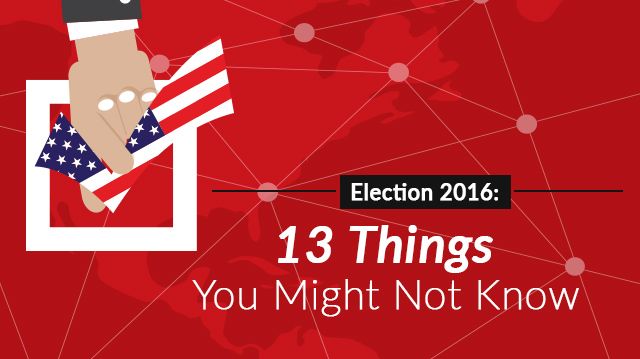 There has been a lot of coverage of key contenders Clinton, Sanders, and Trump, but few know about their forays into music, sport and entertainment. Clinton won a Grammy for Best Spoken Word in 1997 and Sanders released a folk album, “We will overcome.” Sanders called it “the worst album ever recorded.” Meanwhile, Trump has been involved financially in professional wrestling since the early 1990s, owned the Miss Universe beauty pageant for years and has had a long run on reality TV shows.

Voters in the 2016 election could be the most diverse in U.S. history

Assuming that all those who are eligible to vote do so and don’t face any obstacles, Pew Research has found that one in three voters in November could be Hispanic, African-American, Asian or another non-white identity. That’s 156 million eligible white voters to 70 million non-whites. Turnout varies: In 2012, 64 percent of white eligible voters voted, 67 percent of black eligible voters did, and just 48 percent of Hispanics.

Most Americans aren’t fans of the primaries

Only 35 percent of voters think the primaries have been a good way to determine the best-qualified nominees, a recent Pew Research survey found. Independent voters have been frustrated that they can’t vote for their preferred candidates in the primaries. Nationally, at least 43 percent of Americans label themselves as political independents, much more than those who identify as Democrats (30 percent) and Republicans (26 percent), according to a 2015 Gallup poll.

Slow voting on the day?

Forty-three states use computerized voting machines that are 10 to 15 years old and increasingly unreliable and insecure, according to the Brennan Center for Justice. Limited budgets mean poorer areas, often with more under-privileged people, can suffer long voting delays. Election laws with tighter identification procedures will be in force in 17 states. The consequences are already evident; last month, primary voters in Wisconsin were arbitrarily rejected. Extremely long lines in 2012 in some regions, the result of changing voting laws, infrastructure issues and limited funding, led to an investigation by the Presidential Commission on Election Administration, but it seems that few of the recommendations of that commission have been implemented.

A Reuters/Ipsos poll found that nearly half of the voters who support either Democrat Hillary Clinton or Republican Donald Trump mainly are trying to block the other side from winning. Of those who would vote for Trump, 47 percent would be voting to stop Clinton winning, Just 43 percent would be voting for him because they like this political positions. The figures were almost identical for Clinton supporters.

There is no “bad” publicity

P.T. Barnum’s dictum that there is no such thing as bad publicity seems to be holding true. The Washington Post documented Trump’s poll results and found that the highs in his campaign correlate to his level of media coverage — even if that coverage was unfavorable. However, as of the end of last year, despite having a good third to a half of Democrat support, Sanders had received just 0.4 percent of the airtime offered to Trump. According to The Post, Trump alone has received more coverage than the entire Democratic field.

And the winners is…TV advertising

Borrell Associates released a report last year that found that total online political ad spending was projected to soar, with the electoral race expected to generate more than $12 billion — $51 per eligible voter.

It’s impossible to say what policies will result in positive changes for any given voter, but the data on what happens after elections is clear: Recessions happen four times as frequently under Republicans as under Democrats, and the stock market does better under a Democrat president.

Pew Research has found that there is a strong interest in the 2016 election, which corresponds to a high level of learning about it. Cable TV news is the most popular source of information (described as “most helpful”), at 24 percent, followed by social media and local television at 14 percent each, then news websites and radio. Candidate websites, apps and emails, were only found to be helpful by 1 percent of those surveyed. For people 29 and under, social media was the most popular source of information about the candidates.

While it is unlikely that Sanders will win the Democrat nomination, his campaign has ruffled some big feathers. The Atlantic described him as the “most successful insurgent” and he has crystallized the political emergence and voice of the Millennials, poised to be the largest voting block by 2020. They say reality has a well-known liberal bias. What happens next among the “Bernie bloc” voters will be a test of that theory.