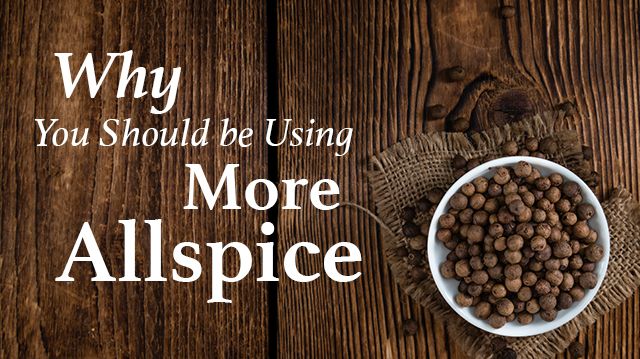 Allspice is a common resident of Western, Latin American and Caribbean spice cabinets, earning its name from its apparent likeness to a combination of cinnamon, nutmeg and clove. Allspice is, in fact, the unripe fruit of the allspice tree (Pimenta dioica), a mid-canopy, evergreen tree native to southern Mexico, Central America and the West Indies.

Allspice first made its appearance in European cuisine following Columbus’s discovery of the New World. The Spanish and Portuguese gave it the name “pimenta,” believing the dried berries of the allspice tree to be peppercorns. Today, allspice is grown and harvested in Jamaica, Mexico, Trinidad, Cuba and Honduras, and gains much of its fame as a key ingredient in Jamaican jerk chicken.

In addition to its interesting history and culinary versatility, allspice also has a wide range of medicinal uses. Here are a number of reasons why allspice should reside in your medicine cabinet, as well as your spice rack:

The organic components of allspice make it a useful tool for soothing the stomach and facilitating digestion. Eugenol, the essential oil of allspice, has been proven to eliminate digestive issues such as nausea, diarrhea, vomiting, and constipation. Allspice also helps to stimulate regular bowel movements, which in turn reduces bloating and excessive flatulence. The anti-inflammatory properties of allspice help to alleviate cramps, further easing the digestion process.

The eugenol contained in allspice has strong antibacterial, antifungal, antimicrobial and antiseptic properties. For this reason allspice can help to improve your dental health. Gargling with a mouthwash or formula containing allspice extract or eugenol essential oil has been linked to improved dental and gum health due to its ability to prevent the action of bacterial pathogens.

Allspice is well known in the health community for its ability to reduce inflammation and alleviate pain in the body. The active ingredients in allspice contain inflammation-fighting compounds, which can provide relief from arthritis, gout, or muscle aches. Aside from its anti-inflammatory properties that alleviate the cause of joint and muscle pain, allspice also contains certain analgesic substances that directly target and reduce pain associated with swelling or injury.

The antibacterial and antifungal properties of allspice can make it a powerful enemy against harmful stomach pathogens such as E. coli and L. monocytogenes. This means that it can help prevent bacterial infection and bolster your immune system. Furthermore, when added to certain foods, allspice performs the same role as it does in your stomach, neutralizing bad bacteria before it reaches your mouth.

Allspice contains high concentrations of potassium, which has been shown to promote healthy heart function. Allspice is a known vasodilator: It promotes the relaxation of smooth muscle cells within blood vessel walls, widening blood vessels to increase blood flow. This in turn reduces the strain placed on the arteries and heart, lowering your risk of stroke or heart attack.

The potent combination of vitamin C, vitamin A, eugenol oil, tannins, quercetin, and a range of other chemical compounds in allspice make it a powerful source of antioxidants. The substances contained within this exotic spice can be instrumental in eliminating free radicals and removing them from your body. This reduction in free radicals, the harmful byproducts of cellular metabolism, can safeguard you against cellular mutation and protect you from serious diseases such as cancer.

Allspice contains significant concentrations of iron and copper, which are both associated with healthy red blood cell production and therefore efficient circulation. The essential volatile oils in allspice also act as a rubefacient, meaning they irritate localised skin and expand blood vessels. This causes increased blood flow and a warming of the skin, resulting in improved energy levels and adequate oxygenation of the body’s extremities.

Getting your allspice fix

Enjoying the medicinal benefits of allspice is easy, as it can be used in a range of culinary applications. These include Caribbean soups, stews, pickling blends, Indian curries, chutneys, jams, pickles and preserves, mulled wine, sausages, meat pies, meat rubs and marinades, and even as a flavoring in hot chocolate — and of course, jerk chicken.

Allspice pairs particularly well with meats such as beef and lamb, but it is also a culinary friend to vegetables such as cabbage, brussels sprouts, beets, squash and tomatoes. You can crush allspice in a mortar and pestle and add the powder to dishes to provide a strong flavor, or add the whole corns to soups and stews at the onset of cooking. For a lighter flavor, add the corns towards the end of cooking.

While allspice is loaded with beneficial properties and has many medicinal uses, it should be noted that it can cause serious allergic reactions in hypersensitive individuals. As with everything, use caution, and if need be, consult your physician before using allspice.