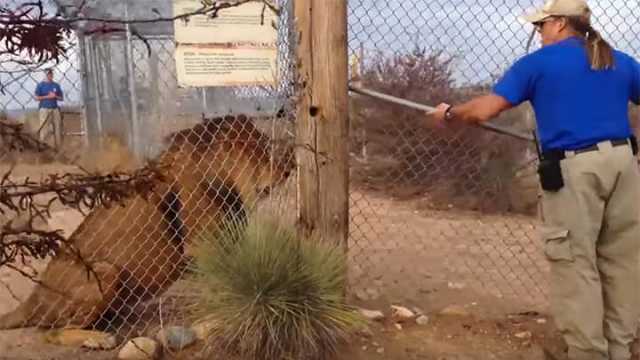 For children and adults alike, visiting a zoo or wildlife preserve can be an exhilarating experience. We don’t often run into large animals like lions, tigers and bears in the wild. And when we do, it’s often a dangerous situation. Seeing them safely behind a fence allows us to learn about them and behold their natural majesty up close.

However, while seeing animals in captivity can be fun for humans, I’d say that this state of affairs is not nearly as fun for the animals — and that is something to keep in mind. Not only that, if we’re not careful, zoos can be downright dangerous. Reference the tragedy involving Harambe the gorilla and the little boy who crawled into his enclosure.

Even when the animals you encounter are behind a fence or in an enclosure, it’s still important to exercise caution and keep your wits about you. One zookeeper seems to have learned this lesson in quite a shocking way.

Out Of Africa Wildlife Park

A viral video is currently circulating the internet showing a zookeeper letting out a truly terrified scream when a lion roars and lunges towards him. Jeff Harwell is a zookeeper at the Out of Africa Wildlife Park in Camp Verde, Arizona, which “shows off wild-by-nature animals in their own, natural splendor.”

In the video, Harwell, an “experienced big cat trainer,” is showing a group of park-goers how to “play” with lions. To “play” with the lion, a large male, Harwell walks up to the fence with a long pole in his hand. He sticks the pole through the fence (so the lion can supposedly play with it).

In a confident voice, he announces to the group, “When you’re playing with lions, it’s important to never show fear.” At that very moment, however, the lion decides he is not amused. With a great roar, the lion leaps towards the fence. Harwell screams and jumps back, nearly tripping. I can’t say I blame him — a lion running towards you must be quite the fright.

Was it a real reaction?

When the video was posted, some folks did not buy the authenticity of Harwell’s reaction. There is speculation that he feigned his scream in order to get social media attention and to entertain the crowd. While this is possible, when you watch the video, it seems that the reaction is indeed knee-jerk fear. Either that or Harwell is an excellent actor.

The lion’s reaction to Harwell was certainly not feigned. He did not want a human sticking a metal pole into his personal space.

Harwell was obviously not harmed by his encounter with the lion. The fence between them stopped any damage that may have occurred. Still, the video should give us some pause. What if the lion had clawed Harwell through the fence before he had a chance to jump back? What if the fence was not strong enough to hold the lion?

These enclosures are, of course, supposed to be built to regulation. But human error does occur, in all arenas. The park is also not accredited by the Association of Zoos & Aquariums, so the lion may not have the correct space requirements, diet or socialization that it needs.

Other attractions at the Out of Africa Wildlife Park include petting giraffes and other animals not considered to be dangerous. There is also the “Predator Feed” during which guests feed raw meat to tigers, lions and hyenas. There are also shows featuring large snakes and trained tigers.

This all might sound fun, but let’s think about the animals for a minute. Tigers do not want to do tricks. Lions do not want to play with humans. These animals are wild and do not thrive in captivity. It would be great if we could leave nature alone. Let’s stop putting wild animals in cages — they do not exist to entertain and thrill us.