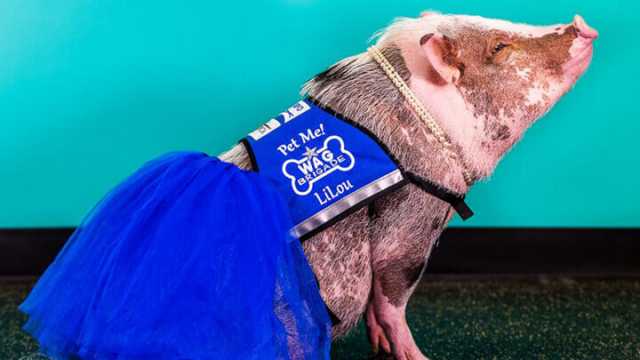 Travelers passing through San Francisco International Airport (SFO) might be surprised to see a cute animal in a tutu waiting at the gate. Meet LiLou, the airport’s first therapy pig. She’s there for stressed travelers flying in and out of SFO, introducing a new way to calm weary nerves.

Now, it seems they’ve added a new non-canine member to the Wag Brigade. The newest recruit, LiLou, is a spotted Juliana mini pig — and she’s a hit.

“It was like an A-list celebrity walking through the terminal,” said SFO public information officer Doug Yakel to the New York Post, of LiLou’s Monday debut. “You couldn’t get 10 feet without people running up to see her or taking out their cellphones to get a picture. She really has a magical effect on people,” said Yakel.

Like her canine counterparts, LiLou roams the terminals. But this little piggy entertains guests wearing costumes. She even has her nails painted red. She twirls and stands on her back legs while wearing a tutu, and other times she plays a toy piano.

When you think of a pet pig, you probably imagine a farm animal roaming your living room and barreling through your great grandmother’s antique hutch. But nothing could be further from the truth. Mini pigs make great pets, says “Three Little Pigs,” one of Canada’s premier leading breeders of mini pet pigs.

They’re intelligent, loyal and as dedicated as a dog. Yet, they remain relaxed and as cuddly as a kitty. And just like LiLou, mini pigs are easily trained to do tricks, walk on a leash and even use a litter box. They’re also ideal pets for allergy suffers since they’re hypoallergenic. So, if you’ve avoided getting a pet for fear your allergies would flare, why not adopt a pig?

For those who won’t be passing through SFO anytime soon, you can find LiLou on her Instagram account, @lilou_sfpig. Meanwhile, LiLou seems quite content strutting her stuff up and down the terminal and lapping up affection from the “pig-loving” travelers.