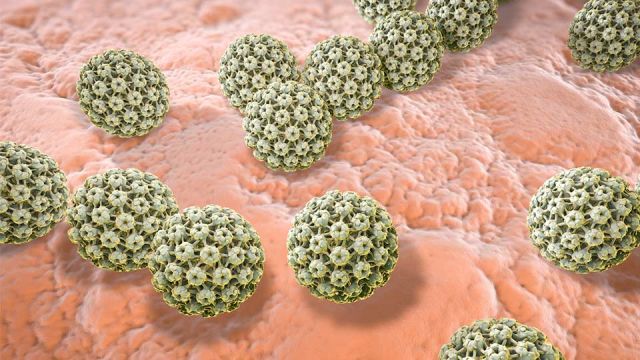 Human papillomavirus, or HPV, is a sexually transmitted infection, and the more sex partners you have, the bigger your risk. Now, a new study reports that an epidemic of HPV-related cancers is on the rise among men, suggesting there are more throat cancer incidences in men than cervical cancer in women.

Men are more likely to have HPV type 16

HPV affects about 79 million people in the U.S., with 14 million people newly infected each year, says the Centers for Disease Control and Prevention (CDC). In fact, HPV is so common in the United States that most sexually-active men and women will get at least one type of HPV at some point in their lives.

There are many different types of HPV with infections. Some don’t cause symptoms and will go away on their own. Other HPV infections produce genital warts and lesions in the upper respiratory tract. But the virus can also cause cancers in the cervix, vagina, vulva, anus, penis and the throat. A study from the University of Florida that appeared in Annals of Internal Medicine found that between 2011 and 2014, 11.5 percent of men and three percent of women were actively infected with oral HPV. That adds up to 11 million men and 3 million women infected with oral HPV.

The study suggests that men are almost six times more likely to be infected with cancer-causing oral HPV strains, affecting the back of the throat in an area called the oropharynx. Researchers found that HPV type 16 — one of the strains responsible for causing most oropharyngeal cancers — was more common among men than in women. In fact, nearly two million men in the United States are infected with HPV 16.

So, what is oropharyngeal cancer? It is a disease in which malignant cells form in the tissues of the oropharynx. The oropharynx is the middle part of the throat, behind the mouth.

Here’s what you need to know

If you’re male and between the ages of 50 to 69 years old — which according to the study, is the age group with the highest prevalence for oral HPV — here’s what you need to know about oropharyngeal cancer:

HPV is the single biggest cause of cervical cancer and oropharyngeal cancers, according to the CDC. Between 2008 and 2012, almost 39,000 Americans were diagnosed with HPV-related cancer every year. Fifty-nine percent were women and 41 percent were men. But while pap smears and HPV tests have reduced rates of cervical cancer in women, rates of oral cancer are still growing in men.

“There are now more of these HPV-related throat cancers in men than there are cervical cancers in women,” reports Dr. Erich Sturgis, professor of head and neck surgery at the MD Anderson Cancer Center at the University of Texas. According to study lead Dr. Ashish A. Deshmukh, “the rates of oropharyngeal cancer among men have risen more than 300 percent in the past 40 years.” That makes it the most common HPV-related cancer.

One afternoon, Joseph Mendelsohn placed his hand on his neck and felt a lump. He immediately made an appointment with an ear, nose and throat specialist and was prescribed antibiotics and steroids. As a precaution, he was also scheduled for a needle biopsy and CT Scan in case the bump didn’t go away.

Three days later, without any symptoms except that bump on his neck, 44-year-old Mendelsohn was diagnosed with stage 4 HPV-related oral cancer. The HPV virus, his doctors said, was likely contracted in college over 25 years ago. Now, three years later, Mendelsohn is a survivor and wants to share his experience in the hopes of bringing awareness to HPV-related oropharyngeal cancer. Learn more about his story here.

Does the HPV vaccine help?

It’s important to note that men like Mendelsohn who have been diagnosed with this form of potentially deadly cancer are not people who were promiscuous or who cheated on their spouses. They are simply people like you, who dated in their younger years — had girlfriends or boyfriends.

“The highest viral loads tend to be in the cervix,” suggests Dr. Erich Sturgis, professor of head and neck surgery at the MD Anderson Cancer Center at the University of Texas. “Men performing oral sex on women probably tend to get exposed to the highest amount of virus,” he told NBC.

The only way to prevent infection is the HPV vaccine. But, while the HPV vaccine may help prevent these tumors, it’s currently only recommended for people under the age of 26 years old. Yet, the CDC says only 60 percent of parents are getting their kids vaccinated.

And, for those 40 percent who are not being vaccinated, this can cause serious problems later in life. Because once someone is infected — and that’s most people over age 26 — the vaccine won’t help. The fact is, many men are simply too old to receive the shots. And that means several generations of American men may be left vulnerable to head and neck cancers, with no way of actually knowing if one is growing.

To see if you’re at risk, visit your doctor for tests that examine the mouth and throat. These can be used to help detect, diagnose and stage oropharyngeal cancer.