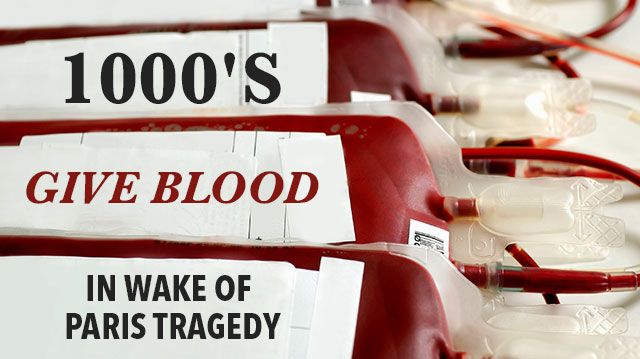 A tone of solidarity resonates as powerful as the bells of Notre Dame de Paris as thousands of Parisians line up to donate blood. Just 12 hours after the devastating attacks around Paris, citizens flocked with compassion to the roughly 20 blood donation clinics around the city.

One such clinic, where mostly young donors waited, is located opposite one location involved in the stream of attacks, where 14 people were killed.

Many of the blood donation clinics in Paris saw four times their usual number of blood donors just 24 hours after the attacks. Health professionals working the now-bustling clinics have noted that this is the most blood donors they have ever seen volunteering to donate the potentially life-saving gift. 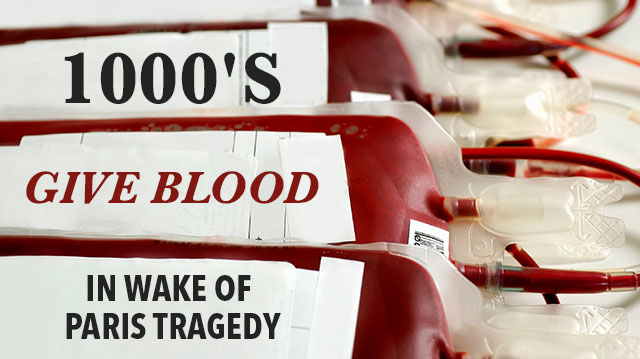 The spontaneous nature of the blood donations has become contagious as people become diverted from their daily lives, overwhelmed by an urge to help the more than 350 injured, including the nearly 100 in critical condition. People have also taken to Twitter to help promote the blood donations, using the hashtag #DonDuSang (donate blood), and including photos of the experience.

Fadila Benayache, a 36-year-old who has lived in France for nearly 15 years, was on her way to place flowers at one memorial near her home. However, when she saw the line for blood donations, she felt that this could be a better way to honor the victims. “Some people are still at the hospital right now, in serious conditions, and I was just thinking, what can I do,” Benayache told CNN.

It was the first time Benayache had donated blood. In fact, one in five of the people donating blood in the wake of the Paris tragedy had also never given blood before, according to CNN. Health officials are also surprised at the amount of younger people who waited for upwards of three hours to donate blood. “It’s the only way I can think of to respond,” Camille Ruiz, 26, told The Telegraph. “To help in a concrete way.”

Giving blood is an exceptional way to give back, whether after a natural disaster, a large-scale tragedy from an attack, or just on a whim to be a good human. When you donate blood, you may be helping someone in their most critical hour of need. One pint of your blood can save up to three lives, according to the American Red Cross.

Here are a few more facts and statistics about giving blood from the American Red Cross:

Have you ever donated blood? What was the deciding factor which led you to donate?