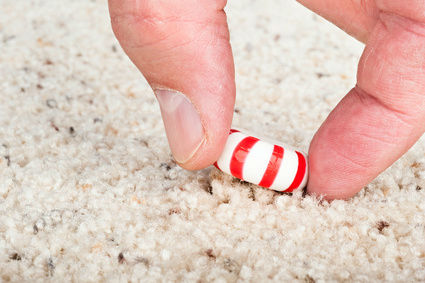 You know you’re guilty of it … dropping a bite of this or that on the floor then quickly retrieving it and trying to subtly slip it back into your mouth. And when the stares of horror come from those around you, you quickly acknowledge the “3 second rule” as if it were something everyone should undoubtedly know about.

It often seems like the 3 second rule is taken for scientific fact. Many people appear to have no problem eating food that graced the dirty floor for a few seconds yet they coat themselves with hand sanitizers and find incredibly creative ways to exit the bathroom without having to touch the doorknob. But where did this supposed “rule” come from?

Until recently, very little research has been performed on the credibility of the “rule.” So researchers at the Manchester Metropolitan University decided it was time to determine if it was indeed fact or fiction.

They selected five commonly eaten foods, bread with jam, cooked pasta, a slice of ham, a plain biscuit and dried fruit and dropped them on the ground for periods of either three, five or 10 seconds. Each item was then tested to see just how much of the floor’s bacteria wound up on the food.

Foods with the highest salt and sugar content fared well as bacterial growth had a hard time multiplying on these concentrated substances. Researchers believe the high-nitrate and preservative content of the ham kept bacterial growth at bay while the drier foods like the biscuit were deemed safe for consumption even after 10 seconds of exposure.

Yet the higher-water content foods like the cooked pasta quickly absorbed a number of harmful microbes. Klebsiella bacteria, which is responsible for causing a number of illnesses, was found growing on the pasta after just a quick three-second ground exposure.

Although it may seem like the almighty 3 second rule just may be proving true for some foods, you may want to hold just yet. Earlier research tested bologna’s ability to absorb salmonella from various surfaces. Researchers from Clemson University allowed bologna slices to fall onto either a wood, tile or carpet-covered surface.

Within five seconds 99 percent of salmonella bacteria were transferred from the tile surface to the meat. The bologna fared somewhat better on the wood surface with a 68 percent absorbance rate but fared best of all on the carpet with minimal absorbance.

Although the bologna was allowed to sit on the surface longer than the supposedly safe three seconds, it still absorbed an incredible amount of dangerous bacteria. And food safety experts note that you have no idea what kinds of bacteria are thriving on even the cleanest of surfaces.

Over 76 million Americans come down with foodborne illnesses each year and over 300,000 of them need to be hospitalized. So before you pop that dropped bite back into your mouth, ask yourself if it’s really worth the risk.