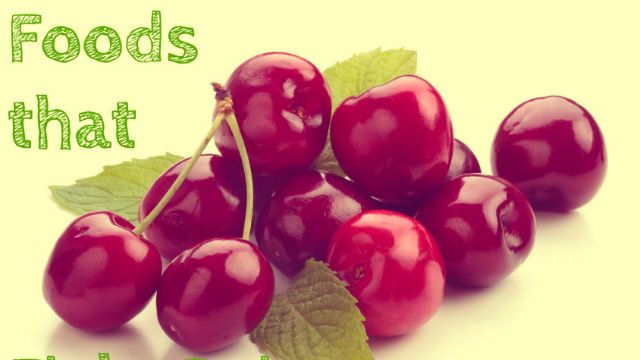 Pain comes in many forms and intensities, from mildly uncomfortable to downright excruciating. A variety of conditions can lead to what is known as chronic pain, pain which persists over a long period of time and may be experienced constantly in some cases.

One main factor in chronic pain, as well as many types of other pain, is inflammation. Inflammation is the immune system’s natural response to a threat or injury, and is characterized by swelling of the tissues and joints. When inflammation persists over a period of time, it can both cause pain and lead to a breakdown of many of the body’s systems.

For the pain associated with chronic conditions, such as arthritis, gout and others, as well as for injuries, many people turn to either over-the-counter or prescription medications. However, these often have rather unsavory side effects, and some can be addictive.

Instead of going this route, there are a number of anti-inflammatory foods with analgesic (pain-relieving) properties you can try first to relieve pain naturally. In some cases, they may be more effective than you would expect.

While nature offers many different foods and herbs that possess these properties, the following are six great choices to try.

In Central America, where pineapples have been eaten for hundreds of years, the pain-relieving effects of these succulent fruits are well-known. In recent decades, researchers have been exploring this effect of pineapple, and have found that it may in large part be thanks to an enzyme known as bromelain. Bromelain has been linked to potent anti-inflammatory properties.

A 2004 study performed at the University of Southampton in the United Kingdom reviewed a number of clinical studies on the pain-relieving effects of bromelain. The researchers concluded that in many cases, bromelain extract was as effective, or more effective, than NSAID painkillers for reducing the pain of osteoarthritis. Other research found that bromelain may be more effective than prescription anti-inflammatory medications for a variety of pain types.

Bromelain is also linked to faster recovery times after surgery. In Germany, bromelain extract is an approved post-surgical treatment for the pain and swelling following ear, nose and throat surgeries.

It is also associated with relief from irritable bowel syndrome (IBS) symptoms, as well as ulcer pain. While these effects have been found in bromelain extract, eating pineapple may also provide at least some relief in many situations.

The vitamin C found in pineapple helps to boost the immune system and aid the body in fighting infection. It also works to ease sinus inflammation and thins mucus during a cold or respiratory infection.

Flax seeds are one of the highest vegetarian sources of essential omega-3 fatty acids, which are known for their potent anti-inflammatory properties. The primary omega-3 found in flax seeds is alpha-linolenic acid (ALA). Eating these little seeds not only helps to prevent the onset of chronic inflammatory illness, it can also help to soothe inflammatory pain in some cases.

The study was performed on 116 young women who experienced breast pain rated as “severe” during their menstrual cycles. The women were randomly given either a muffin containing three and a half tablespoons of ground flax seeds, or a placebo muffin, for several cycles.

On top of that, flax has many other nutritional benefits, and may even help to prevent certain types of cancer. Just make sure you always grind your flax seeds before eating them, or baking them into your favorite nutritious baked goods, as this makes the nutrients bio-available (the hard shell of the flax seed is essentially non-digestible, so if the the exterior is not broken, they will simply pass right through the digestive system).

The antioxidant compounds in cherries, especially tart cherries, have been found to have potent anti-inflammatory properties and have pain relieving characteristics. They have specifically been studied in regards to gout, with its associated muscle and joint pain and swelling due to uric acid buildup in the blood.

A 2012 study performed at Boston University surveyed 633 individuals afflicted with gout for one year. The volunteers were asked to track specific factors in the two-day period prior to their gout attacks. Upon analyzing the results, the researchers found that, “cherry intake over a 2-day period was associated with a 35 percent lower risk of gout attacks compared with no intake.”

Another study, performed in 2010 at Oregon Health & Science University, surveyed 54 runners in good health who ran approximately 16 miles during a 24 hour timespan. The runners were given either two 355 milliliter bottles of tart cherry juice per day, or a placebo juice, for seven days prior to a race event. Before and after the race, the participants were asked to assess their pain levels.

Results showed that the runners who drank the tart cherry juice reported a “significantly smaller increase in pain” than the placebo group. The researchers concluded, “ingesting tart cherry juice for 7 days prior to and during strenuous running can minimize post-run muscle pain.”

Not only can the vitamin C found in oranges help to both boost the immune system and reduce sinus and respiratory inflammation, research has shown that the carotenoid antioxidants found in oranges and other similarly pigmented fruits and vegetables can help to reduce the risk of chronic inflammatory conditions, such as rheumatoid arthritis.

A 2005 study performed at the University of Manchester in the United Kingdom surveyed 88 cases of inflammatory polyarthritis (arthritis which affects four or more joints) within the Norfolk Arthritis Register.

The study authors wrote, “these data are consistent with previous evidence showing that a modest increase in beta-cryptoxanthin intake, equivalent to one glass of freshly squeezed orange juice per day, is associated with a reduced risk of developing inflammatory disorders such as rheumatoid arthritis.”

A growing body of recent research has found coffee to have a wide variety of health benefits. One benefit of drinking coffee on a regular basis is that its caffeine content has been linked to reduced muscle pain after exercise.

A 2007 study performed at the University of Georgia consisted of 9 college-aged women who were given either caffeine or a placebo for two days before undergoing electrically-induced muscular contractions of their quadricep muscles, designed to simulate “eccentric exercise,” defined as a muscle actively contracting while lengthening, such as occurs during many weight-training exercises.

The women were then asked to rate the intensity of their muscle pain. The researchers found that the caffeine had a significant effect in reducing pain in comparison to the control group. The study authors wrote:

“This experiment found that caffeine (equal to approximately 2 cups of brewed coffee) could produce a large reduction in pain resulting from eccentric exercise-induced, delayed-onset muscle injury. This finding may improve the quality of life of individuals who experience skeletal muscle pain after engaging in unaccustomed, eccentrically biased exercise.”

Licorice root, used since ancient times for both its medicinal properties and its sweetness in culinary applications, has certain analgesic properties that mimic some of the body’s natural inflammation-reducing hormones. One of the traditional uses of licorice is to soothe the inflammation and irritation of coughs and colds.

This root has been linked to easing the pain of indigestion when taken internally, and has been found to reduce some of the itchiness and swelling of eczema symptoms when applied topically.

A 2005 study performed at Al-Isra University in Jordan tested the effects of licorice extract for its anti-inflammatory and anti-ulcer effects in rats. The researchers found that the anti-inflammatory properties of the licorice root were comparable to those of diclofenac sodium, a prescription medication commonly used to treat pain and inflammation.

Licorice root can be steeped into a delicious tea. However, it is important not to overdo it with licorice, as large amounts over a long period of time may lead to high blood pressure or cardiovascular problems. Especially for this herb, it is important to talk to a health professional of your choice to determine how much is safe to take – and for how long – for your individual needs.

*Do not take licorice root if you have kidney disease or high blood pressure. 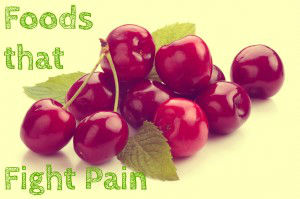 Note: With regards to the above foods and drinks, always choose organic, to maximize nutrient content, as well as to avoid potential exposure to pesticides and other harmful chemicals. Check with a health professional before starting a regimen with one or more of these foods to treat a chronic condition, to make sure they are safe for your individual health.