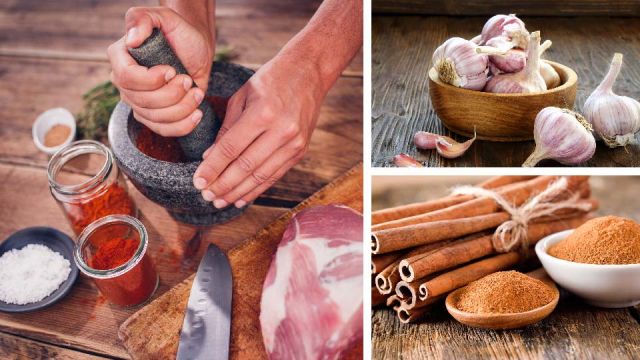 Spices don’t just improve food, they can also improve you! In fact, even many of the most common spices you’ll find at the supermarket can have some remarkable health benefits, such as helping you lose weight, boost your brain power and help you recover from common illnesses. Check out these five spices, each of which have some serious scientifically proven health benefits.

If you’re a fan of spicy food, then congratulations: you’ll probably live longer — and not by a short while. In fact, chili eaters might live nearly two decades longer than the general population. In a major study of more than 16,000 Americans, researchers at the University of Vermont College of Medicine found regular chili eaters are cheating death for an average of 18.9 years longer than they should be.

Moreover, this wasn’t a one-off; a previous study in 2015 found similar results. It’s not entirely clear why chili is so good at keeping us kicking, though the researchers had a few ideas. They suspected it may come down to capsaicin, which has a weird ability to activate transient receptor potential channels. This kicks off a chain of reactions that basically ends up slowing down obesity.

“Protection against obesity leads to decreased risk of cardiovascular, metabolic, and lung diseases,” the researchers noted. So in short, chili not only makes you live longer, but might also help you lose weight. Pretty sweet deal, right?

One of the world’s most expensive spices, cardamom is actually a mix of the seeds of several plants. Nonetheless, this mix has proven itself to have some surprising health benefits. For one, it’s an anti-inflammatory and may lower blood pressure. Along with potentially helping ward off cancer, it might also reduce the symptoms of asthma, gut problems, hypertension and epilepsy.

Notably, the research behind many of these findings is still in its infancy, though they’re promising signs that cardamom could offer more than just an exotic flavor. Speaking of which, cardamom is pretty easy to integrate into any curry, and adds some flavor to chai tea. You can find a good mix of cardamom recipes here.

Cinnamon is another spice that you might not expect to be quite as awesome as it really is. For one, cinnamon is full of antioxidants which may reduce inflammation. It might also reduce the risk of heart disease, and animal studies have also found it could lower blood pressure.

However, unlike most spices on this list, cinnamon isn’t just good for your body — it’s also good for your mind. There’s good evidence to suggest cinnamon could help increase cognitive performance. Basically, cinnamon is full of sodium benzoate, which in turn has the interesting effect of helping the brain retain new information better. So cinnamon makes you both smarter and healthier.

You knew this one was going to turn up somewhere on this list. Yes, garlic is without doubt one of the healthiest foods around, period. Its health benefits have been recognized as far back as ancient Egypt, and today there’s some good science to back up age-old beliefs surrounding Dracula’s least favorite spice (or vegetable, because technically garlic is neither a herb or spice).

Putting aside the awkward question of garlic’s culinary classification, one thing that’s unquestionable is that garlic is extremely rich in vitamins, particularly vitamin C and vitamin B6. It’s also high in manganese, plus a handful of other nutrients that almost everyone needs. On top of its immense nutritional value, garlic is also able to help you recover from the common cold.

Yup, this old home remedy is now supported by clear scientific evidence. In one 12-week study, researchers found daily consumption of garlic reduced the risk of catching a cold by 63 percent. The same study found garlic can even help if you’ve already got a cold, by reducing its length by up to 70 percent. For most people, this means the average cold can be reduced from lasting for five days to just two.

Not bad, right? Again though, this study wasn’t a one-off. In a separate study, researchers concluded that if you consume garlic every day, you can reduce your total number of annual sick days caused by the common cold or flu by as much as 61 percent.

Long valued by traditional Indian medicine, tumeric has become something of a fad superfood in recent years. Much has been made of its ability to dramatically boost the body’s antioxidant capacity, which might reduce the risks of various health problems associated with aging.

Now it’s important to note antioxidants may not be the panacea that some of their most ardent fans claim, but that doesn’t put a dent in garlic’s impressive resume. On the contrary, arguably turmeric’s most intriguing claim to fame is its potential ability to reduce the risk of age-related brain diseases, such as Alzheimer’s disease. A small study has also found some evidence suggesting turmeric might be just as effective as Prozac in treating the symptoms of depression.