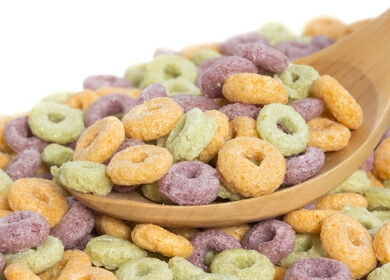 It has become a relatively well-known fact that boxed cereal is not the healthiest way to start your morning, to say the least. The preservatives, artificial colors, flavors and gluten content included in most brands leave them lacking the nutritional punch and energy boost that they advertise.

However, some boxed cereals are simply terrible, and what makes them even worse is the fact that they are precisely the types being marketed directly to our children.

The cereals marketed to kids have approximately 85 percent more sugar, 65 percent less fiber, and 60 percent more sodium than those marketed to adults. This is especially frightening since the average preschooler views about 642 ads per year on television, according to recent statistics.

The Environmental Working Group (EWG) recently surveyed 84 popular boxed cereal brands for sugar content, and found that only a quarter of them met the voluntarily-proposed guidelines of the Federal Interagency Working Group on Food Marketed to Children, which recommends no more than 26 percent added sugar by weight. The EWG is pushing to make this limit even lower, but so far, national brands aren’t even close to meeting this bare minimum.

The following are 5 of the worst boxed cereals for overall health:

Honey Smacks: This sickeningly-sweet concoction leads the EWG’s list of ’10 worst children’s cereals,’ based on sugar content alone. This cereal is comprised of a whopping 56 percent sugar by weight.

This means that one cup of Smacks actually has more sugar than a Twinkie. On this statistic, Dr. Andrew Weil, a health expert, comments, “the fact that a children’s breakfast cereal is 56 percent sugar by weight – and many others are not far behind – should cause national outrage.”

Honey Smacks also contain trans fats, in the form of ‘hydrogenated or partially hydrogenated soybean oil.’ This is listed in the ingredients, but not calculated into the fat percentage on the nutrition label.

A few years ago, the FDA decided that trans fat content only needs to be listed if the food contains 0.5 grams or more per serving. If trans fats are included, but in less than this concentration, it can be listed as zero percent. This is absolutely egregious, because as we all know, servings add up.

Another ingredient featured in Honey Smacks is BHT, or butylated hydroxytoluene. Used as a preservative, BHT is also used in jet fuel, petroleum products, rubber and embalming fluid. It also shares chemical properties with toluene, a highly toxic solvent that has been linked to neurological problems when inhaled.

If this weren’t enough, Honey Smacks have less than one gram of fiber.

Froot Loops: The very first ingredient on the nutrition label on a box of Froot Loops is sugar. In fact, this cereal weighs in at 41.4 percent sugar by weight. Froot Loops also contains trans fat and BHT. It does has several ‘natural fruit flavors,’ but there is absolutely no real fruit.

Froot Loops is, in fact, a rainbow of artificial colorings; red 40, blue 1 and 2, and yellow 6, to be specific. Artificial colorings have been linked to hyperactivity in children by multiple studies, and are potential triggers of mild to severe allergic reactions, especially in those sensitive to aspirin.

Additionally, blue 2 has been linked to cancer in lab rats in some experiments, and red 40 is under investigation by some researchers as a possible carcinogen. Yellow 6 has been lined by some studies to cancer of the adrenals and kidneys, and also to digestive issues.

One other potentially harmful – and untested – component of Froot Loops: GMO corn. As 85 percent of the corn and soy grown in the United States today is genetically modified, products containing non-organic corn are very often made of GMO varieties. 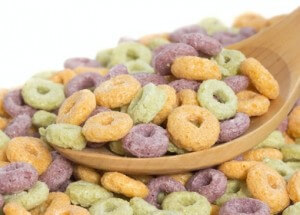 While apple juice and dried apples ARE included, the pesticides that non-organic apples introduce in the mix could outweigh the health benefits of the fruit. Apple Jacks contains 42.9 percent sugar by weight, less than one gram of fiber, and nearly 130 grams of sodium per serving. Apple Jacks also contain BHT, blue 1, and red 40.

Rice Krispies: Rice Krispies made the list because they are often seen by parents as a ‘healthier’ option for their children due to the significantly lower sugar content. While it is true that Rice Krispies won’t spike blood sugar like many other children’s cereals will, it is anything but healthy. It contains trans fats, BHT, soy ingredients, possible GMO grains, and absolutely no fiber.

New York University (NYU) nutrition professor Marion Nestle summarizes the problem with so many of today’s boxed breakfast cereals: “cereal companies have spent fortunes on convincing parents that a kid’s breakfast means cereal, and that sugary cereals are fun, benign, and all kids will eat… No public health agency has anywhere near the education budget equivalent to that spent on a single cereal. Kids should not be eating sugar for breakfast. They should be eating real food.”