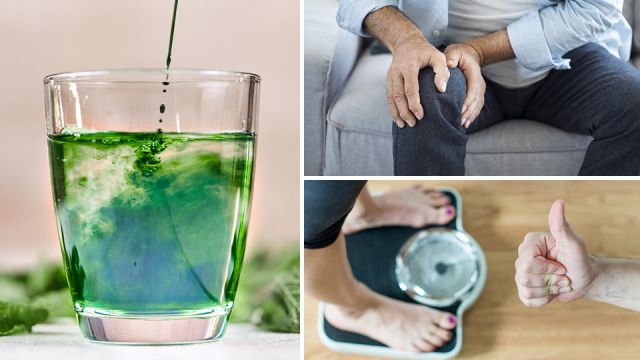 Have you ever noticed how light, energetic and overall healthy you feel after eating a bowlful of fresh greens? I certainly notice the difference when I have a salad for dinner. I feel like I’ve done both my body and my mind a lot of good. Additionally, my fatigue is usually lessened on evenings where my family dines on salad. While there are many different nutrients in green veggies to thank for these effects, one big part of the health quotient is chlorophyll.

Chlorophyll is the pigment that makes green plants green. These include most grasses and trees, your favorite green vegetables, as well as blue-green algae. You have probably heard time and time again that you need to eat your greens, and there’s good reason for that. The nutrition found in green vegetables in unmatched.

Although a lot contributes to the nutritious nature of greens, chlorophyll alone is amazingly healthy. The following are just nine of its many health benefits.

1. A wealth of antioxidants

On this substance, the authors of a 2012 study published by the Research Center of Occupational Medicine of Peking University wrote, “Chlorophyllin shows cellular protection against oxidative damage by counteracting the excessive free radicals.”

The structure of chlorophyll is very similar to that of the hemoglobin in our red blood cells. For this reason, it is sometimes called “green blood,” and it is a wonderful substance for healing our blood. Getting more chlorophyll in your diet may help your cells to get more oxygen. This improves the health of your entire circulatory system by increasing red blood cell production throughout your body.

3. May help you heal faster

Chlorophyll and the plants that contain it have been traditionally used in wound healing for many centuries, and some research suggests that its use may result in shorter healing times. It is currently used in certain antiseptic wound care sprays. Chlorophyll can also be highly beneficial to your immune system, due to the presence of antioxidants and because it has an alkaline pH.

“The study shows that chlorophyll and its degradation products are valuable and abundantly available anti-inflammatory agents and promising for the development of phytomedicine or conventional medicine to treat inflammation and related diseases.”

5. A good source of iron

Research has found that chlorophyllin can be highly effective in replenishing the body’s stores of iron. A 2010 study published in the Journal of Agricultural and Food Chemistry sought to determine the bioavailability of iron from chlorophyllin. The results were quite positive. The study authors wrote, “Potentially, sodium iron chlorophyllin could be used as an iron fortificant from vegetable origin with high bioavailability.”

6. May help with weight loss

Adding more chlorophyll-rich foods to your diet can be a great addition to a healthy weight loss plan. Some research has found that consuming chlorophyll helps to reduce cravings for unhealthy foods.

A 2013 study published in the journal Appetite tested the effects of chlorophyll-containing foods on 20 overweight women. The women who received the chlorophyll reported that they were less hungry for the calorie-rich meals that were offered, and also that their blood sugar levels showed more consistency.

Some very interesting research has found that chlorophyll and chlorophyllin may both be effective in prevention and treatment of certain cancers. For one example, a 2013 study published in the journal Food and Chemical Toxicology analyzed the effects of chlorophyll on certain carcinogenic processes. The study authors found:

“These results show that Chl [chlorophyll] concentrations encountered in Chl-rich green vegetables can provide substantial cancer chemoprotection, and suggest that they do so by reducing carcinogen bioavailability.”

Another benefit of the alkaline and antibacterial nature of chlorophyll is its potential to fight fungus, namely the common yeast known as Candida albicans. On the results of a 2007 study on the effects of chlorophyll against yeast and Enterococcus faecalis, the authors wrote, “Chlorophyll-based solution presents effective antimicrobial activity of C. albicans.”

Chlorophyll can help to neutralize certain types of bacteria, and this includes the types that lead to unpleasant body odors. This has been long known. For a 1980 study published in the Journal of the American Geriatrics Society, researchers gave tablets of chlorophyllin to 62 patients in a nursing home. On their results, the authors wrote:

“In a test group of 62 geriatric nursing home patients, the administration of chlorophyllin tablets was found to be helpful in controlling body and fecal odors. It aided also in easing chronic constipation… No toxic or other ill effects were observed.”

How to get more chlorophyll in your diet

That’s the easy part: just look for real food that’s green. Adding greens such as kale, collards, Swiss chard, arugula, spinach and watercress to your meals is one of the healthiest things you can do for yourself, and these foods are teeming with chlorophyll.

If you’d like to supercharge the chlorophyll content of your green smoothies — or even your coffee and tea — consider finding a trustworthy source of organic spirulina or chlorella. Both are super nutritious and very high in chlorophyll. If you have a health condition, however, talk to your doctor before you start taking either of these supplements, to make sure they’re a good fit for your individual health.