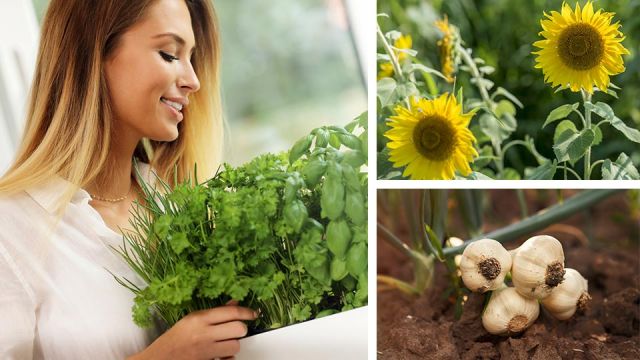 In today’s high-stress world, it’s hard to remain upbeat all the time. The daily 9 to 5 grind, financial pressures and the occasional family drama all work to bring you down a peg or two, and it’s during these times of woe that you look external sources for a little cheer.

And the solution might be closer than you think. In fact, simply stepping outside into your garden has the potential to take you from moody to magnificent in the blink of an eye (or sniff of a nose, as it were). That’s because certain plants commonly found around our homes or in our gardens have been scientifically proven to improve your mood, along with providing plenty of other benefits besides.

Here are eight garden plants to naturally improve your mood.

Inhaling the gloriously sweet scent of lavender is one of life’s simple pleasures, and it just so happens that this herbaceous perennial packs a powerful punch when it comes to elevating your mood.

A 2016 study examined the effect of lavender aromatherapy on 140 pregnant women admitted to hospital for delivery. Subjects were divided into two groups: a control group who received standard postpartum care, and a group who received that same care along with inhaling three drops of lavender essential oil every eight hours for a month. Results showed that the lavender group had significantly lower levels of stress, anxiety and depression up to three months after delivery.

While few would disagree that the smell of a rose is second to none, it turns out that the real healing value of roses is actually in the sight of those wonderful blooms. A Japanese study published in the Journal of Physiological Anthropology showed that simply looking at unscented pink roses was enough to significantly lower feelings of comfort and relaxation for 31 male office workers.

So far we’ve covered sight and smell, but what about the role of taste in improving your mood? There’s a plant for that too! Basil, an amazingly potent herb that’s a must-have in the kitchen, contains linalool — a compound that has been shown to protect against cognitive damage, fight depression and elevate mood.

Rosemary is a herb laden with significance in several different cultures around the world, and it’s a stellar accompaniment to a wide range of culinary exploits in the kitchen. But where rosemary really excels is with regard to elevating mood.

Personally, I’m a huge fan of chamomile tea. I make a point of brewing a strong cup of chamomile every evening before bed — not only for the mellow, floral taste, but also for the calming effect it has on my body and mind.

And the effects of this common flower are well documented. A study published last year, for example, showed that chamomile extract helps to significantly improve sleep quality in the elderly. Research also shows that chamomile can treat depression and anxiety — a pretty darn impressive mood lifter, if you ask me!

It’s hard to imagine anything more mood-lifting than a row of bright yellow sunflowers swaying gently in an afternoon breeze. And not only will you instantly feel happier simply looking at them, when they’re done for the season you can harvest their seeds too.

And sunflower seeds, as it happens, contain phenylalanine — a natural compound which has been shown to play an important role in regulating mood.

Oregano is a great herb to grow both in the garden and indoors on a sunny windowsill, and makes for an excellent seasoning in many meals. Not only that, oregano contains certain active compounds that have been shown to exhibit strong antidepressant effects in trials.

So could sprinkling a little fresh oregano from your garden on your meals boost your mood? There’s only one way to find out!

Onions have got to be one of the easiest plants to grow in the garden, and they’re positively loaded with immunity-boosting, heart-supporting nutrients. Conveniently, onions have also been shown to increase dopamine activity in the hypothalamus, meaning they have a strong antidepressant effect. If that doesn’t improve your mood, I don’t know what will!