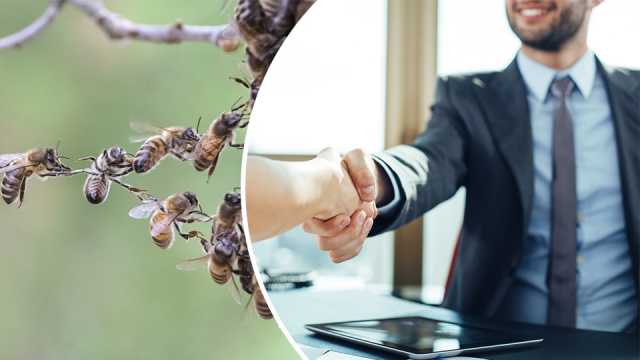 Honey has long been used as a symbol for wisdom and spiritual insight. Expressions like “the nectar of the gods” and “honeymoon” illustrate that the syrup bees manufacture is closely associated with both divine knowledge and romantic bliss. It’s no accident that we frequently call our loved ones “honey” or that idyllic and heavenly places are referred to as “lands of milk and honey.”

Bees, which produce honey, are among the most fruitful creatures on the planet. They gather pollen from flowers and plant life, which they transform into nectar to feed their colony. In the process, they help fertilize a vast range of flora and crops.

For instance, bees help pollinate vegetables (like broccoli), fruits (apples, blueberries and melons), and nuts (such as almonds). According to some estimates, one out of every three bites of food we eat depends on the work bees do. Their role is so important that Albert Einstein once predicted that, “Mankind will not survive the honeybee’s disappearance for more than five years.”

Bees are a species that have a harmonious and beneficial effect on the environment and are vital to the earth’s ecosystem. Therefore, I believe there’s a lot we can learn from them about life, health and even ethics. Here are some really amazing things you might not know about bees.

Survival of the busiest

Scientists believe bees have been in existence for about 100 million years. One reason biologists think they’ve been so successful for so long is that they are an incredibly moral species. Put simply, bees are incredibly industrious, cooperative and honest. For example, bees typically employ a highly efficient division of labor where the collective good comes first, but individual members thrive as the hive flourishes.

Second, bees may be small and they have tiny brains, but they accomplish extraordinary engineering and construction feats through cooperative action. For instance, both mathematicians and engineers have long marveled at how beehives exhibit advanced engineering principles, which make their honeycomb structures optimally resilient yet also maximally efficient in terms of the resources used for construction. Indeed, some scientists contend that bees know more about geometry and engineering than most humans.

Third, bees give every indication of being an incredibly honest species. Humans, chimpanzees and many other mammals routinely deceive other members of their tribe. On the other hand, bees have a complex “dance language,” which they use to communicate the location of food sources.

But bees are renowned for always conveying that information accurately to other members of their hive. As researchers note, bees are truly remarkable in so far as they never try to deceive one another. We humans could learn a thing or two from bees about how honesty and social success tend to go hand in hand.

Bees have impressed mathematicians, geometricians and engineers for thousands of years. In the first-century BCE, for instance, the Roman scholar Marcus Varro became one of the first people to take note of the hexagonal structure of the honeycomb.

Mathematicians have since pointed out that there are only three polygons — hexagons, triangles and squares — that that can close a plane without leaving any gaps. Bees, as it happens, choose hexagons, which offer the most efficient shape as far as food storage goes. Bees, it seems, are natural geometry whizzes.

Bees may exhibit an even deeper knowledge of geometry and physics. Dr. Barbara Shipman is a mathematician with a keen interest in both quantum physics and bees. Quantum physics, of course, is the science of sub-atomic phenomenon. According to Dr. Shipman, the “waggle dance language” that bees use to communicate food sources looks amazingly similar to patterns that have proven useful in describing quantum fields.

Of course, quantum physics is often described by scientists as very mysterious, even mystical. So, it’s quite intriguing that patterns in the quantum realm might be duplicated in the dance language of bees. What it all means is uncertain, but Dr. Shipman believes that the brains of bees may be equipped to navigate to food sources by taking advantage of very subtle quantum fields.

The idea of a “quantum compass” in bee brains may seem far out, but many scientists now believe migratory birds take advantage of a similar mechanism. By the way, an increasing number of neuroscientists and philosophers believe quantum physics may help explain the human mind. As it turns out, understanding how bees navigate and communicate could shed light on the mystery of consciousness.

Honey is a superfood

Honey has been used for centuries as a natural remedy and a superfood. It is loaded with antibiotics, antioxidants, anti-allergy and antifungal properties. For eons, people have found that it soothes coughs, fights colds, eases arthritis and lessens constipation.

Equally important, honey is believed to aid digestion and improve the absorption of vital nutrients. It is also a natural sweetener that provides energy, but without causing dramatic spikes in blood glucose levels.

Is it a coincidence that as diabetes levels rise among humans that bees have also been hit by a phenomenon known as colony collapse disorder, which is decimating hives across the country? Ironically and tragically, industrial-style agricultural practices, which rely heavily on neonicotinoid-type pesticides (known to be neurotoxic to bees) are behind a vicious cycle — pollinating bees are killed off and consequently, people are increasingly left with less healthy eating options.

We need to wake up to what is happening to bees because their fate and ours are intertwined. Indeed, in so many ways, what’s happening in their hives right now mirrors our own predicament, which is rooted in unsustainable and unwise agricultural practices.

Studying bees can make us better stewards of the environment

Thankfully, there is a glimmer of hope. An initiative called The Bee Cause Project is setting up observational hives in schools. The idea is to help people (particularly school age kids) reconnect with nature.

The project’s director, Tami Enright, explains that “I think this generation is really detached from nature.” She adds that “We have a goal of helping kids get connected with nature again. And we’re using the honey bees to do that.”

In other words, by studying honeybees people can once again begin to understand what it means to be embedded in an ecosystem. There are also lessons about language, mind, mathematics, ethics and even happiness to found in studying bees. Indeed, “Some schools have even gone so far as to use the bees as a form of recreational therapy for children with prevalent emotional and behavioral needs.” In short, bees have a lot to teach us about relating to life. We just have to be more open to their wisdom.