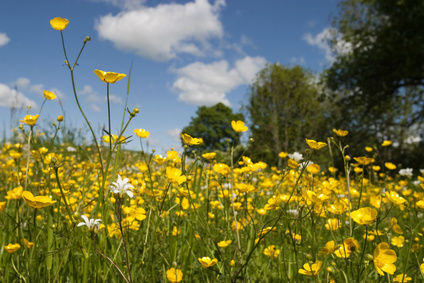 In a recent editorial, Dan Charles of National Public Radio (NPR) brought to light the dramatic reduction in US grasslands over the past decade. The reason for the decimation?

High grain prices have farmers buying up—and mowing down—the prairies, which are essential to the health of our environment.

Charles reports that in 2013 alone, 1.6 million acres of grassland was taken out of the federal Conservation Reserve Program (CRP), a program that pays farmers to plant and maintain the grasses and trees native to the land, keeping it intact. Over the last decade, the amount of land protected by the CPR has diminished by about 25 percent.

The demand for grain, as well as federal funding cuts for the CPR, are responsible for this decline. Much of the land that once housed native grasses, trees and wildlife is now being torn down and used for growing corn, wheat and soybeans.

According to Carter Johnson, a South Dakota State University ecologist, using this land for crops, “just has to be a bad thing for water quality, soil erosion and wildlife.” More grassland kept in its natural state leads to more carbon stored within the soil, cleaner water and less fertilizer runoff in the areas. It also means that the thousands of wildlife species native to the grasslands can keep their homes.

As far as how grasslands protect soil from erosion, Johnson says, “With those deep roots that grasses have, and thick thatch, the water has a hard time getting ahold of the soil.” He adds, “I’ve seen things that I never thought I’d see here in South Dakota.

With these land prices going up, there actually are people out there with Bobcats and front-end loaders, pulling out the rocks in hundreds of acres of land that’s been in pasture all these years.”

USDA environmental initiatives sometimes provide assistance to the farmers who buy grassland for grazing their cattle, so that it can remain grassland. However, many more plough it under in favor of crop production, and many of those do not follow sustainable practices. This eventually leads to poorer soil quality, loss of wildlife habitats and the

spread of pesticides and herbicides across the prairies.

Obviously, farmers need space to grow their crops. However, doing so on precious grasslands may lead to further-reaching environmental consequences, and when it is widely realized how important these lands are to our ecosystem, it may be too late.