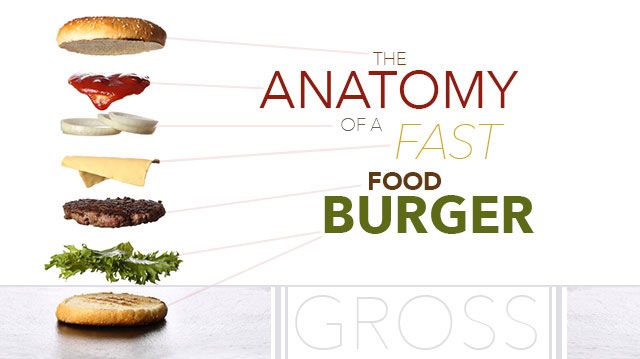 Most Americans feel that fast food is not good for you, yet, according to a Gallup Poll, eight out of 10 report eating fast food monthly, with almost half saying they eat fast food at least weekly. But before you scarf down another fast food burger, you might want to know what you’re actually putting in your mouth. Here’s some information that may leave you asking, “Is it really worth it?”

When old is new again

You may have heard the story about a man from Utah who found a forgotten McDonald’s hamburger in his coat pocket. He then kept it for 14 years — to his surprise, the burger stayed intact and mold-free. In fact, the burger had barely aged. According to McDonald’s website, the only ingredient in its hamburger is 100 percent pure USDA-inspected beef, prepared with salt and black pepper — and without fillers or extenders. Still, anything that does not decompose, or even show any sign of decomposition after several years, seems very strange.

Yet, even if fast food burgers don’t contain preservatives or additives, the fact remains that the livestock are usually given antibiotics and growth hormones to make them grow faster and more resilient to disease. These antibiotics, along with antibiotic-resistant bacteria, are then transferred to us every time we eat a burger. Two million Americans become infected with antibiotic-resistant bacteria every year, causing at least 23,000 deaths. But it doesn’t stop there.

Another goody, ammonium sulfate, which is also found in the buns, is made from a reaction of sulfuric acid and heated ammonia, and is most often used as a commercial fertilizer and in the manufacturing process of nylon. And let’s not forget those preservatives that no doubt keep those buns (and us) fresh for years.

While many Americans think the burgers they’re eating are all or mostly beef, it turns out a study published in the journal Annals of Diagnostic Pathology concluded that some fast food hamburgers may actually contain as little as two percent meat. So if you’re not eating beef, what are you eating?

The study analyzed eight fast food burgers from various fast food restaurants and found that what they actually contained was what is normally found in hot dogs: blood vessels, nerves, fat, plant material, cartilage, bone — and in two hamburgers — parasites.

In 2009, Michael Moss wrote an investigative piece for The New York Times called “Safety of Beef Processing Method Is Questioned.” Apparently, another additive injected into the fast food burger is ammonia.

Moss reported that eight years earlier federal officials struggled to remove potentially deadly E. coli from hamburgers when an entrepreneurial company, Beef Products Inc., came up with the idea of injecting beef with ammonia. Beef Product Inc. was looking for an opportunity to expand into the hamburger business with a product made from beef that included fatty trimmings once used only in pet food and cooking oil.

Although the trimmings were susceptible to E. coli and salmonella, the company showed that injecting the meat with ammonia would kill the contaminants. Endorsed by the United States Department of Agriculture (USDA), ammonia-tainted meat soon found its way into the meat industry and into fast food chains throughout North America. 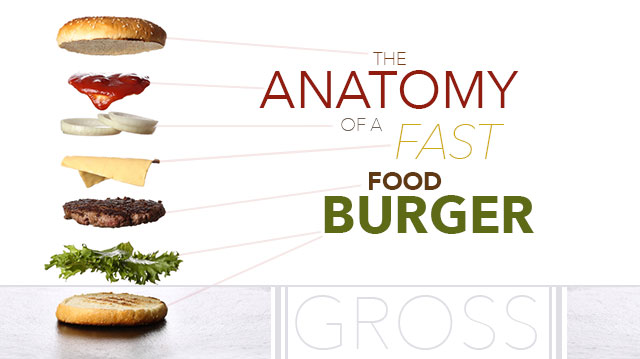 Sodium nitrite, a preservative that’s used to cure deli meats and bacon, is also used as a coloring agent in the fast food industry to make old meat look red and fresh. Sodium nitrite is linked to pancreatic cancer, suggests a study conducted by the Cancer Research Center of Hawaii and the University of Southern California.

L-cysteine, an amino acid often used to extend shelf life in products such as commercial bread, comes from duck and chicken feathers, and cow horns. However, L-cysteine used in food actually comes from human hair — that’s right, human hair. According to the The Vegetarian Resource Group, most of the hair used to make L-cysteine comes from China, where it’s gathered from barbershops and hair salons. Fresh breads made from local bakers are usually L-cysteine-free; unfortunately, fast food joints may use L-cysteine as an additive in their buns.

By now, you’re most likely grossed out. So instead of your usual burger, you’ll opt for a fish or chicken sandwich. The problem is, if your burger is loaded with so many nasty chemicals, there’s a good chance everything else in your favorite fast food restaurant is as well. And while many fast food joints boast healthier menu options, they still haven’t reduced sodium or committed to using non-GMO foods. So, in the end, while fast food burgers are certainly fast, they’re also kind of gross, too. Bon appétit!