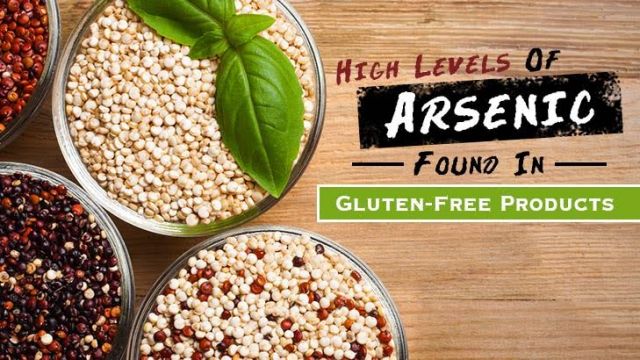 Going gluten-free just got a little more complicated. According to an investigation coordinated by Consumer Reports, alarmingly high levels of arsenic are found in rice-based gluten-free products.

As part of its investigation, Consumer Reports tested for arsenic — a toxic metal that can seriously affect your health — in a range of different foods. The investigation found that arsenic was present in high levels in grains and grain-based products, bottled water, coffee, processed juice, and beer. The highest levels of arsenic, however, were found in rice, and in particular, brown rice.

While this may not pose a significant risk for those who only eat rice occasionally, for those who eat a lot of gluten-free products, arsenic poisoning could become an issue. That’s because many of the branded gluten-free foods available on supermarket shelves, health-food stores, and bakeries are predominantly rice-based. These products include gluten-free breads, pastas, baked goods and cereals.

Why is arsenic so bad? Well, for starters, it was historically used as a poison, and was reportedly responsible for the deaths of various important historic figures. These include the Grand Duke of Moscow, King Eric XIV of Sweden and Napoleon Bonaparte. While the evidence to support these claims has been lost in the mists of time, scientific literature continues to reinforce and even amplify the toxic nature of arsenic, whether chronic or acute. In more recent times, arsenic has been used for dramatic effect in the plot of many films and novels. Take this 1944 movie Arsenic and Old Lace, for example.

Arsenic is an effective poison because it is tasteless, odorless, and resembles sugar granules. In sufficiently large doses, arsenic is certainly deadly, while long-term exposure to low concentrations of arsenic can result in a myriad of chronic health issues. These include epileptic seizures, rashes and skin irritation, abdominal pain, nausea, neuropathy, diarrhea, and cardiovascular complications. Inorganic arsenic, the form found in rice and rice-based products, is also a known carcinogen and can cause significant damage to the body’s organs, including the liver, heart, kidneys, lungs, and nervous system.

Those at greatest risk from arsenic toxicity are infants and gluten-free first-timers. The study found that “some infant rice cereals, which are often a baby’s first solid food, had levels of inorganic arsenic at least five times more than has been found in alternatives such as oatmeal.” Many babies are also regularly fed rice-based formulas and crackers. For this reason, and due to the fact that newborns and young children are far more susceptible to toxicity issues than adults, feeding rice-based foods to them should be limited.

By the same token, those who have just made the shift to a gluten-free diet because of gluten sensitivity are also at high risk. These people likely already have health problems, such as autoimmune disease and malnutrition, which could be worsened by the effects of arsenic. Individuals with a gluten sensitivity or intolerance also often have a hard time giving up gluten-based foods, such as bread and pasta, and therefore turn to rice-based gluten-free products as a transitional food.

While the study provided only a “snapshot” of the rice and rice product market in the United States, it did note some important trends relating to arsenic. White rice grown in Arkansas, Louisiana, Missouri and Texas, for example, generally had higher levels of total and inorganic arsenic than elsewhere. These states account for 76 percent of all rice grown domestically.

Furthermore, no matter what the brand of rice, brown rice was always found to have significantly higher concentrations of arsenic, when compared to white rice. What’s more, according to data from the study, those who ate rice had 44 percent higher levels of arsenic in their blood than those who didn’t eat rice. Of these people, certain ethnic groups, including Mexicans, Hispanics and Asians, were at higher risk of arsenic toxicity than others.

The trouble with arsenic poisoning is that there is no universally agreed upon method of medical treatment. Because inorganic arsenic must go through a methylation reaction in the liver before it can be excreted by the kidneys, those who have methylation problems are at particular risk of arsenic toxicity. Furthermore, arsenic can accumulate in the hair, skin and nails, making it difficult to remove. It is generally agreed, however, that supporting the liver and kidneys can play an important role in minimizing the detrimental effects of arsenic. Natural chelation agents, such as cilantro, garlic, parsley, and broccoli, can also help to bind arsenic and other heavy metals and enable the body to expel them.

Unfortunately, rice products aren’t the only source of arsenic in our food. Find out how arsenic has been found in most chicken meat.