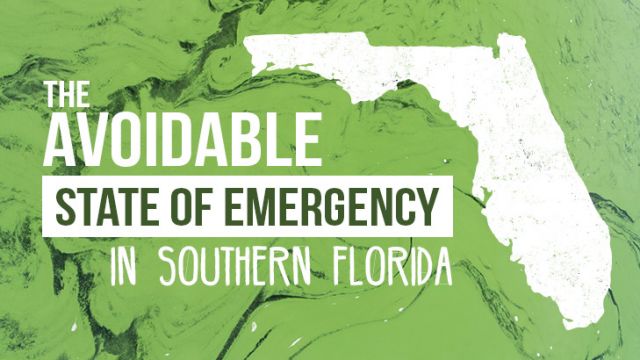 On June 29, Florida Governor Rick Scott declared a state of emergency in St. Lucie and Martin counties in response to the blue-green algae blooms that have paralyzed local businesses and tourism. This wasn’t something that came out of the nowhere; local communities have been warning of the problem for years.

The seeds of the current algae event were planted over a century ago, when areas south of Lake Okeechobee were drained to make way for farmland and a dike was built to hold lake water from flowing south. Farming operations since have dumped phosphorus and nitrates into Lake Okeechobee, providing the conditions for algae blooms to thrive. In order to protect the newly created farmland from flooding, water from the less-than-healthy lake is discharged into nearby waterways, contaminating them with the same phosphorous and nitrates that pollutes the lake.

The discharges more than doubled this year and to make matters worse the lake has been dealing with a blue-green algae bloom that spans several miles. Communities along the St. Lucie River were rightfully concerned that the algae bloom represented a considerable risk for the health of local ecosystems once lake water was discharged into the river.

Restoring the farmland south of the lake back to wetlands and allowing water to flow south is considered the best course of action by many. It wouldn’t fix the problem entirely but would mark a significant step taken to restoring the health of Florida’s water.

“Restoring the natural southern flow of Lake Okeechobee water is essential to the survival of our estuaries, the health of the Everglades and the long-term viability of South Florida’s largest drinking water source,” says Captains for Clean Water, a South Florida NGO comprised of fishing boat captains and other concerned citizens.

The main problem with this plan, however, is that people own the land south of the lake, and it would have to be purchased from them. The Fanjul family operated a sugar dynasty in Cuba before Fidel Castro seized power in 1959. Shortly afterward, Castro’s troops seized the Fanjul property while the family escaped to Florida. They purchased a large section of property just south of Lake Okeechobee and were able to rebuild the sugar dynasty they had lost in Cuba. The U.S. Sugar Corporation also purchased areas south of the lake and combined the two companies, often referred to as “Big Sugar.”

A deal was made for the state of Florida to purchase the land from Big Sugar at market value in 2008 (for $1.8 billion) and begin the restoration of Lake Okeechobee, the Everglades and all of the nearby communities that rely on the health of the water. It was a deal everyone supported. Then the economy crashed and the deal was delayed. A small amount of land was purchased for $197 million and the plan was to resume purchases after the economy recovered.

In 2010, something else happened that would change the game entirely: Rick Scott was elected governor of the state of Florida.

Rick Scott is not exactly a guy prone to placing environmental concerns above business interests. Scott had use of the words “climate change” banned in all state offices, put the axe to a state septic tank inspection program and replaced the members of the South Florida Water Management District with his handpicked team of attorneys, real estate tycoons and corporate executives.

Needless to say, Rick Scott has no intention of spending billions of dollars to restore wetlands in the Everglades. In fact, the U.S. Sugar Corporation is now looking at building condos and resorts in the area.

The Fanjul family and U.S. Sugar are no longer selling their land to the state and want to make sure that policy choices made by Scott meet their interests. They are willing to spend good money to get it. In his re-election campaign, Rick Scott received at least $500,000 in contributions from the sugar industry, and in 2013 attended a private, all-expenses-paid hunting trip at a U.S. Sugar Corporation ranch in Texas.

As the Captains for Clean Water put it: “This consensus solution has been delayed decades because our state’s lawmakers have enjoyed large-scale campaign contributions from agricultural corporations seeking to benefit from the status-quo, combined with a lack of public awareness.”

Unfortunately, Big Sugar receives quite a bit from government in return for their contributions, which are anything but limited to the state level. The sugar industry is able to keep prices artificially high, thanks to import restrictions and tariffs that limit competition. Defenders of this government handout (normally limited to those within the sugar industry or those receiving money from it) say this is done in the interest of food security. Now if a global war were to break out, Americans would be confident in knowing they can sit down and eat nothing but processed sugar and everything will be fine.

This isn’t a Democrat vs. Republican issue. It isn’t even an environment vs. economy issue. This is a case of a common sense solution vs. a politician and industry acting out of self-interest. Every dollar made by pumping phosphorous and nitrates into Lake Okeechobee is a dollar taken from nearby communities that rely on fishing and tourism.  Every donation Rick Scott accepts from the Fanjuls is a dollar that should go to impacted communities.

Local South Florida organizations “Captains for Clean Water” and “Bullsugar” are working to organize Floridians to contact Rick Scott and let him know that what has happened in South Florida was avoidable and is unacceptable.

You can let Gov. Scott know that it’s time to do the right thing for Florida by contacting him at the numbers and email below:

Information on how to take further action can be found on Captains for Clean Water website here.

Once you’ve let Gov. Scott know how you feel, please share this article and encourage others to stand up for Florida.