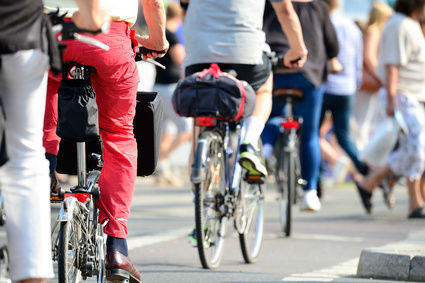 A recent research project completed by a student at Portland State University (PSU) in Portland, Oregon has named biking as the most satisfying form of commuting to work.

Oliver Smith, a PhD candidate at PSU’s Nohad A. Toulan School of Urban Studies and Planning, surveyed 828 Portland residents as to what transportation method they used to get to work—biking, walking, driving or public transportation. Study participants were also asked to assign their chosen method a “well-being score” based on how happy their commuting method made them feel.

Results showed that biking made people the happiest, followed by walking, and the most unhappy commuters were those that drove to work alone.

Factors that lowered the well-being scores of each method were long travel times and congested traffic for drivers, crowded public transportation vehicles for those using public transit and safety issues, mainly for bikers.

Smith wrote, “Commuting to work by active modes increases commute well-being, even when controlling for distance, income and other factors. Traffic congestion reduces commute well-being for car and bus commuters, but not bike commuters. Efforts to encourage greater adoption of non-motorized modes could be enhanced by noting commute happiness as a benefit of biking and walking to work.”

Another study, performed by Todd Litman of the Victoria Transportation Policy Institute found that those people who had short, human-powered commutes to work reported higher levels of happniess than those who used public transport or drove to work.

Regarding this study, Clark Williams-Derry of the Sightline Institute comments, “The happiest of all commuters get to work under their own power. Bikers express the highest levels of satisfaction, and least dissatisfaction, with their morning and afternoon treks. Walkers are close behind. I’m not sure if that’s because walkers and bikers tend to have shorter commutes, or because they tend to have pleasant or stress-free routes.”

Biking is not only fun, it is also excellent exercise, protects the environment from gas emissions, and is a great way to enjoy the benefits of the outdoors. If your place of employment is within biking distance, a safe route is available, and the weather is fitting, it may increase your happiness—and boost your health—to take the bike for a spin to work instead of driving.