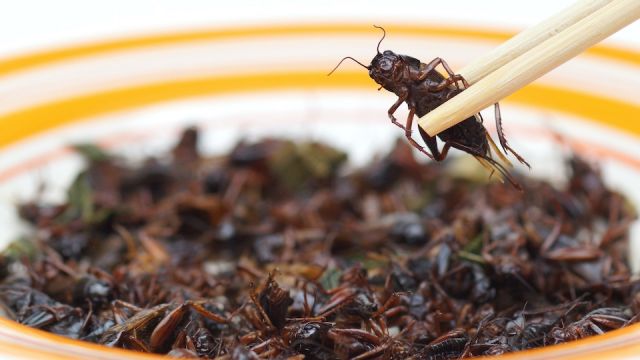 With growing concerns over the environmental impact of farming livestock and an increased interest in alternative protein sources, retailers, restaurateurs, and consumers are starting to take a second look at insects as a serious food of the future.

Many people believe insects are the answer to the ongoing viability of the human food supply since they are nutritious and sustainable to farm. Some popular insects, like crickets, even have an appealing nutty taste and an agreeable crunch, which bug fans say pairs well with both sweet and savory dishes. And since they are high in protein, vitamin B12, iron, and omega 3’s, the nutritional benefits are clear. Most edible insects are rich in protein, fat, fiber, and energy and can be a significant source of vitamins and minerals for humans.

While edible insects are new to most of us in the western world, a U.N. report stated 2 billion people around the world already consider insects a delicacy or even a dietary staple. Insects can be commonly spotted in markets and restaurants around countries in South America, Asia, and Africa. Since there are over 1,900 tried-and-tested edible insect species just waiting to be eaten, could bugs be finding a place on our daily menu as well?

Crickets make an appearance in the meat aisle

If you look around, you may see signs that edible insects are moving from being regarded as a novelty to being regarded as mainstream food. Several innovative products, from protein bars to dried salty snack foods are appearing on the market.

Swedish company Griidy recently launched pre-cooked whole crickets that can be purchased in food stores and added to meals at home. They come in several flavors such as Chilli Roasted for tacos, Garlic Salted for soups and salads, or Soy and Ginger for noodle stir-fries.

A German company called Simply Bugs is part of a wave of brands that have worked on developing meat alternatives using insects. In 2019, they released insect-based burger patties and meatballs, which look much like the real thing.

Other companies are delivering more technical ingredients like water-soluble Insect Protein Concentrate, and Fiber Textured Insect Protein. These ingredients will change the range of options available to insect food manufacturers and could become common in products such as ready-to-mix protein shakes and alternative meat products.

This innovation is pushed by the potential for profits since reports show that bugs could be big business. Consumers are already receptive and interested in alternative protein sources beyond traditional beef, pork, and chicken, and a new report by Barclays predicts the edible bug industry could be worth $8 billion by 2030, up from a little under $1 billion in 2019.

Part of the progress toward a fully-fledged edible insect industry is the development of safety standards and legal guidelines around the sale of insect-based products.

Until recently, selling insects as food has been illegal in some countries. Understandably, it’s easier for people to want to eat insects if they know they have been bred and processed under safe and hygienic standards. That’s why many countries are now working on new guidelines for the production of edible insects before they are allowed to enter the mainstream market. Some insects may produce or contain toxic bioactive compounds, and absorb residues of pesticides and heavy metals from the ecosystem. Allergic reactions could also be a possible hazard. Therefore, the ongoing development of safety measures and strict requirements for insect products is important.

Bugs could be healthier than beef or chicken

Besides being cheap and sustainable to farm, bugs may also have some beneficial health effects. Studies show they can provide essential elements necessary for healthy brain development, improved gut health, and reduced inflammation. The nutritional content of edible insects varies widely based on their farming environment and the feed they are given, but these factors are easily optimized. With smart farming practices, insects could be the latest superfood.

In addition, bug products could be a healthier alternative to plant-based meat alternatives such as soy products, which are often highly processed to imitate meat.

How to enjoy eating bugs

Most of us were brought up thinking insects are dangerous and disgusting – or at best, a backyard curiosity to be examined through a magnifying glass. We probably never imagined the day they would end up on our dinner plate.

Widespread attitudes are one of the main obstacles to the growth of the edible insect market, but many advocates think this could change. It’s happened before: for instance, foods like kale, sushi, lobster, olive oil, or tomatoes were once thought to be strange and unfamiliar when they first got introduced to our culinary culture.

Most people recommend trying crickets as a “gateway bug”, since they have a nutty flavor and pleasing crunch. Another way to get used to eating insects is to use a powdered product in your smoothies or protein shakes.

If you’ve ever been concerned about the negative health and environmental effects of eating meat, keep your eyes peeled for bug products that could be making their way to a grocery store or restaurant menu near you!