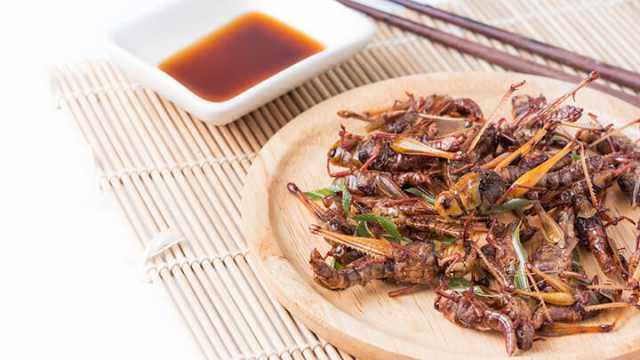 Have you heard the latest buzz? It turns out eating bugs may be a more sustainable alternative to eating meat and fish. Now chefs, sustainability experts and foodies are all embracing entomophagy (or insect-eating) because of their nutritional profile and taste. So, how do you feel about eating bugs — will you be jumping on the “bug” wagon?

Why are we even talking about eating bugs?

The idea of eating bugs may seem gross, but it’s not a new concept. In fact, they’ve always been a staple in traditional diets in certain regions throughout the world. And it’s estimated that bugs feed at least two billion people worldwide. But for most Westerners, the idea is distasteful, to say the least. So, why are bugs even being considered as an edible option?

It’s commonly accepted that by the year 2050 the world will host nine billion people. To feed that many people, current food production needs to double, suggests a report by the Food and Agriculture Organization of the United Nations. Today, there are nearly one billion chronically hungry people worldwide. So, what we eat and how we produce it needs to be re-evaluated.

To date, 1,900 insect species have been documented as a food source globally. Bugs, it seems, can offer non-vegetarians a good source of protein. But if bugs are to become a staple throughout the world, they need to offer much more than just protein. For instance, iron is a particularly important nutrient that’s often missing from non-meat diets. Iron-deficiency anemia can lead to poor cognitive performance, lower immunity, poor pregnancy outcomes and a host of other issues.

But insects are highly nutritious — some more than others — and are a healthy food source. Some provide high fat, vitamins, minerals, fiber and protein. For instance, mealworms are a good source of unsaturated omega-3 and omega-6 fatty acids. In fact, they’re comparable to fish. They’re an even better source than cattle and pigs for protein, vitamin and mineral content. And when it comes to the environment, insects as a food source emit substantially fewer greenhouse gasses — like methane — than most livestock.

A study published in the Journal of Agricultural and Food Chemistry  researched whether commonly eaten insects could contribute to a well-rounded meal. They looked at grasshoppers, crickets, mealworms and buffalo worms for their mineral contents. They also estimated how much of each nutrient would likely get absorbed if eaten, using a lab model of human digestion.

What they found was that insects had varying levels of iron, calcium, copper, magnesium, manganese and zinc. Crickets, for example, had higher levels of iron than the other insects did. Minerals such as calcium, copper and zinc found in grasshoppers, crickets and mealworms are more readily absorbable than the same minerals found in beef. Study results show that eating bugs could potentially support the nutritional needs of a fast-growing population, say researchers. 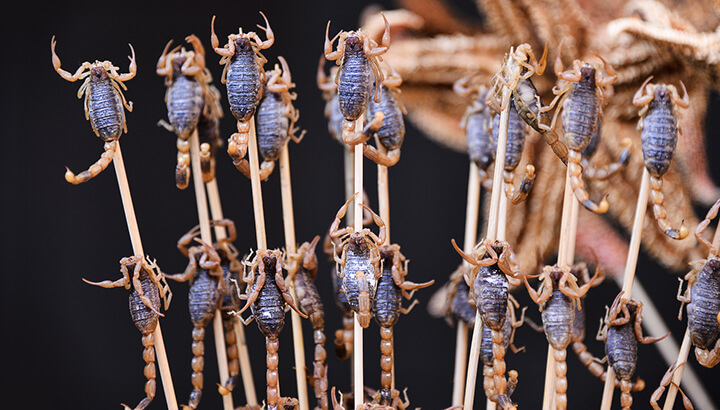 Julie Lesnik, an assistant professor of anthropology at Wayne State University in Detroit, says that one of the reasons you don’t find insects regularly on the menu in North America is because of the continent’s early ancestors.

“When the peopling of the Americas started happening it was tens of thousands of years ago,” says Lesnik. “The entire northern part of our continent was covered in ice. And if you think about finding a food resource at this time, insects are not going to be available.”

But if you traveled south, you would’ve come across these insects. Which is why you see insect consumption in Mexico and through Central and South America but not in the U.S. or Canada, says Lesnik.

If you’re thinking about hunting for ants or worms in your backyard, think again. According to Lesnik, it’s best to avoid these homegrown pests, since they can have highly concentrated levels of pesticides or other toxins. When it comes to eating bugs, source from your local bug farmer.

Where to find these little critters

Out of Campbellford, Ontario in Canada comes Next Millennium Farms (NMF). It is the largest North American farm that breeds, raises and processes insects for human consumption. Opened in 2014, this bug farm is at the forefront of a new agriculture industry about to explode. As more people embrace eating bugs for health and environmental reasons, the business of bugs can only go up.

Crickets require 12 times less feed and 13 times less water than cattle to produce the same amount of edible protein. Additionally, bug farming uses far less farmable land. According to owners Darren Goldin and his two brothers, Jarrod and Ryan, cricket flour is their main selling product. It’s versatile and can be used in almost anything.

“Whether it’s cookies or a salad dressing or vegetarian chili, you can add small amounts of the cricket powder,” suggests Goldin to Global News. NMF can’t keep up with demand from customers. Their biggest customer is Exo, one of the largest cricket protein bar manufacturers in the U.S. 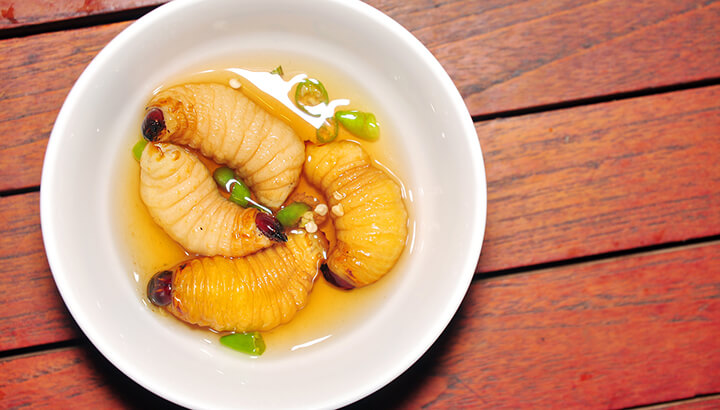 They ground, roasted crickets into flour and made paratha, an Indian flatbread. While it was a delicious dish, the crickets created a bigger buzz than people ordering them, said Dhalwala to Global News. Originally the crickets were introduced ground to patrons, but now they serve them whole. If insects are going to become a common cooking ingredient in North American restaurants, says Dhalwala, kitchens chefs are going to have to make them taste as good as a steak.

Little Herds in Texas, a nonprofit dedicated to bringing edible insects to market, actually supplied Vij’s restaurant with their crickets.“[Sushi] is an example of how something like raw fish, that’s dangerous and disgusting, can be transformed by innovative chefs,’” says Robert Nathan Allen of Little Herds.

How to eat bugs

In case you’re wondering how you go about cooking and devouring bugs, the truth is, bugs can be pan-fried, boiled, sautéed, roasted or baked — with a bit of oil and salt, of course. You don’t have to eat them raw and wriggling. They can also be roasted and ground into flour, then used to make breads, crackers, cookies and bars. Entomophages, or people who eats insects, describe the

Entomophages, or people who eat insects, describe the flavor of bugs as being nutty and tasting remarkably like shrimp. That makes sense since shrimps and lobsters are actually nothing more than large bugs from the sea. And, just like shrimp and lobster are delicacies in the U.S., grasshoppers, wasps and ant eggs are delicacies elsewhere.

But according to American chef David George Gordon, known as “The Bug Chef,” not all insects taste delicious. A battered tarantula may taste like soft-shell crab, but the giant centipede tastes and looks like something from a “nightmare,” says Gordon.

Will eating bugs take off in North America? It’s hard to say, particularly since many people find them offensive. But 80 percent of the world is eating bugs. And, if the world’s population continues to boom, the solution to feeding billions could very well include battered tarantulas, cricket flour and roasted mealworms.