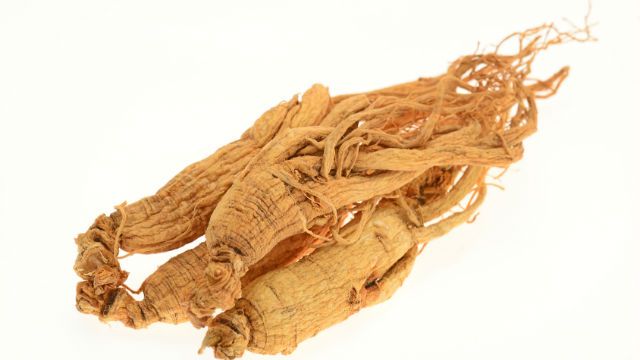 Ginseng root has been featured in Traditional Chinese Medicine since ancient times, in remedies for an array of conditions. In the US, it is often marketed as an energy booster. Now, research is starting to see the potential of ginseng for both the prevention and treatment of the flu and other viral infections.

The ginseng plant is a perennial, with serrated leaves above ground and an elongated root below ground, which becomes significantly larger during its lifespan, which can be decades under the right conditions. It is the root that is celebrated for its healing properties. Ginseng is native to eastern Asia, where it has grown in cooler climates since ancient times. American ginseng grows across North America, mainly in the Midwest. Siberian ginseng, despite the name, is not actually ginseng.

The name of the ginseng genus, Panax, hails from the Greek word “panakeia,” which translates to “universal remedy.” This term gives a clue to ginseng’s adaptogenic properties. Adaptogens trigger natural processes in the body which aid it in healing itself. According to ancient Chinese legend, longevity can be attained by eating ginseng roots, especially large, old roots.

Other traditional uses for ginseng include preventing infections, increasing the body’s ability to fight an existing infection, providing energy and stamina and reducing stress. It has also been used to combat symptoms of menopause and fight the signs of aging.

A new study, led by Sang-Moo Kang of Georgia State University’s Institute for Biomedical Sciences, examined the effects of red ginseng on the influenza virus, as well as on RSV (respiratory syncytial virus), a condition that affects the lungs and airways, and is the primary cause of inflammatory bronchiolitis pneumonia.

In lab studies, Kang found that human lung epithelial cells which had been infected with influenza had a better survival rate when treated with red ginseng extract. He also found that less inflammatory genes were expressed in the cells after the treatment.

Kang also treated mice that had been infected with the influenza A virus with ginseng over a period of time, and found that those that received the ginseng had heightened immune activation and less inflammation in their bronchial walls.

As far as RSV, Kang found that infected human lung epithelial cells had a better survival rate, and less replication of the virus, after treatment with Korean red ginseng. The cells also showed less expression of inflammatory genes. When mice were given Korean red ginseng and then infected with RSV, those that had received the ginseng showed lower viral levels in their bodies.

Note: It is important not to go overboard with ginseng. It is generally considered safe when taken orally, but due to its stimulant properties, it can lead to agitation, sleep problems and digestive discomfort if you take too much for your body to handle. Thus, speaking to a natural health professional about the amount appropriate for your individual composition is recommended. Pregnant and breastfeeding women should not use ginseng.

With the scary reality of a new strain of flu popping up virtually every season, the potential for ginseng to both help prevent it and serve as a remedy is exciting indeed.