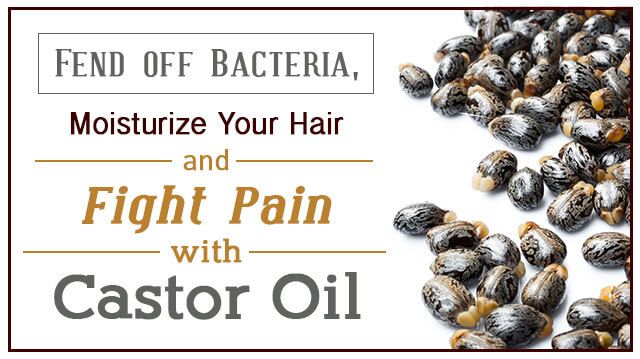 If you belong to a certain generation, you might recall being force-fed castor oil as a child. This common traumatic memory is thanks to the oil’s ability to rapidly relieve constipation, and, in theory, purge any bugs that could be causing illness.

Castor oil has many, many amazing therapeutic abilities beyond the rather unpleasant stimulation of a sudden bowel movement. Ricinus communis, the castor oil plant, is a pink-flowered shrub that grows in warm continents like India and Africa. The shrub produces seeds or beans that look similar to pepitas, except they brown in color. The star-shaped leaves inspired the traditional name “palm of Christ,” which echoes the many health-promoting properties of the plant.

Surprisingly, the beans or seeds themselves can be highly toxic. Once the oil has been extracted from the seeds, the fiber that remains contains a toxin called ricin, which has been used as a chemical weapon. Therefore, the seeds cannot be eaten whole, but rather must be processed to remove the toxin.

Castor oil does not contain ricin and is considered “GRAS” (generally recognized as safe) by the FDA. The World Health Organization (WHO) deems castor oil to be safe at a dosage of 0.7 mg/kg of body weight, which is roughly one tablespoon for adults and one teaspoon for children. However, before using castor oil, remember to do your own research and consult a trusted practitioner to ensure that your particular situation is taken into account.

Once the ricin is removed, castor oil contains many powerfully therapeutic compounds and nutrients.

Undecylenic acid: a germicide and disinfectant

Plus many other nourishing minerals, fats and proteins. Because of the wide range of beneficial constituents, castor oil has many uses for health and beauty. We’ve compiled a number of them below:

Since castor oil is so nourishing and moisturizing, it makes a great hair and scalp treatment for those wanting to prevent hair loss or improve hair quality. You can use it on its own by rubbing a small amount directly into the scalp, or blend with another hair-nourishing oil such as sweet almond or apricot kernel, and add essential oils if you wish.

Essential oils to help strengthen and lengthen hair include rosemary, lavender and cedarwood. This omega-6-rich blend can even be applied to the entire length of the hair and left on overnight. Wear a shower cap or put a towel over your pillow to prevent staining. It may take a few washes to remove the thick oil, but the result will be shiny hair that is stronger and grows faster.

You can also make a natural hair conditioning treatment with castor oil by blending two teaspoons of oil with one egg white and a teaspoon of non-GMO vegetable glycerin. Blend well and massage into wet hair, letting it sit for a few minutes before rinsing well.

The ricinoleic acid in castor oil is known to fend off many different types of viruses, bacteria, yeasts and molds. It strengthens the immune system from within by improving the activity of the thymus gland and lymphatic system, which are central to immune function. Studies have found that patients using castor oil showed increased production of disease-fighting cells called lymphocytes.

This leads us to detoxification. The lymphatic system works in conjunction with the circulatory and digestive systems to ship out waste products. By encouraging efficiency in the lymphatic system, castor oil also helps promote these vital detox functions. 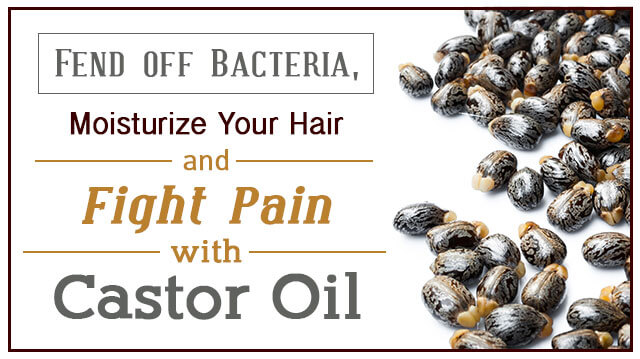 Castor oil is said to be amazing as a cleanser and moisturizer for skin. Its high vitamin E content and numerous fatty acids help to nourish skin and minimize signs of aging.

An easy way to use castor oil for beautiful skin is called oil cleansing. While this can be done with any natural oil, castor oil is a great choice. Blend in a 1:1 ratio with a lighter oil such as apricot kernel or olive oil, and massage into the skin. Optionally, add a small amount of baking soda, sea salt, rye flour or raw sugar for exfoliation. After massaging this mixture into the skin, cover the face with a hot (not scalding) washcloth for a few minutes until it cools. Then gently wipe the face with a clean cloth. This process opens the pores, removes impurities and injects moisture and nourishment into the skin — all in a few simple steps without toxic ingredients, soaps or perfumes.

Castor oil boasts anti-inflammatory properties and is known to penetrate into tissues effectively. A warm castor oil massage and compress can be used to relieve chronic pain and arthritis. Simply massage the affected area with a few teaspoons of oil, then apply a hot washcloth to encourage the oil to soak in.

Castor oil gently irritates the lining of the intestines to produce a natural laxative effect. Simply administer one teaspoon for children or one tablespoon for adults. You can also mix the oil into a glass of fruit juice.

Alternatively, a small amount of oil can be massaged onto the tummy to relieve gas and digestive pain. This is known to be an effective remedy for babies with colic.

Talk to your doctor to ensure this is a safe remedy for you and your family.

Castor oil has traditionally been used to encourage the onset of labor for childbirth. It also aids gynecological and menstrual issues, such as irregular periods, ovarian cysts and cramps. This can be achieved by using a castor oil pack (see below) on the lower abdomen.

The side effects of castor oil are generally cited as digestive discomfort and nausea. People with digestive disorders, such as ulcers or colitis, should avoid consuming castor oil for that reason.

Ways to use castor oil

Make a topical castor oil pack by soaking a piece of cotton (like an old t-shirt or tea towel) in castor oil and placing it on the abdomen or site of discomfort. Place a hot water bottle on top, then cover with an old towel. Be careful while using this treatment as the oil can stain.

If you have access to the plant itself (Ricinus communis), its leaves can be used for multiple therapeutic purposes. Traditional medicine in places like the Canary Islands calls for a poultice of leaves to be used for conditions such as poor lactation, mastitis and menstrual problems.

People in India traditionally boil castor seeds or hulls in milk and water, then drink the mixture to relieve a number of chronic conditions including infections, asthma, inflammation of the bowel, and joint pain.

Try this awesome, time-honored remedy for improved beauty and health. Learn more about ancient remedies that still work today in this article.