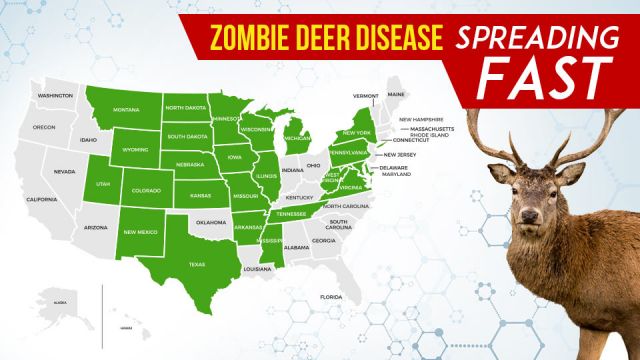 It has spread to more than twenty-five states and two Canadian provinces and is causing deer, moose, caribou, and elk to become zombie-like. A brain-wasting disease that is always fatal is causing the Centers for Disease Control and Prevention (CDC) to become concerned due to the likeliness that this wasting condition will spread to humans.

“It is probable that human cases of chronic wasting disease associated with consumption with contaminated meat will be documented in the years ahead,” said Michael Osterholm, director of the Center for Infectious Disease Research and Policy at the University of Minnesota. “It’s possible the number of human cases will be substantial and will not be isolated events.”

Known as prion disease or transmissible spongiform encephalopathies, chronic wasting disease is the type of thing that you might read about in a horror novel, only it’s real, and it’s deadly. In deer, the disease spreads through contaminated body fluids, tissue, drinking water, and food.

Abnormal prion proteins impact the brain and spinal cord. Brain cells eventually burst and leave tiny empty spaces in the brain matter that appear like a sponge. It can take more than a year for symptoms to develop which include weight loss, lack of coordination, drooling, excessive thirst and urination, listlessness, aggression and lack of fear of people.

The first case which almost turns its victim into a type of zombie was found in a captive deer in the late 1960s in Colorado and in wild deer in 1981.  The natural movement of deer spreads the disease which can be quickened when humans move the deer.

According to the outdoor recreation and natural resource research firm Responsive Management, 39% of hunters pursue the sport for meat. A 2017 Alliance for Public Wildlife report said that it is estimated that up to 15,000 hunter families eat infected meat each year and the number is growing annually by 20% because of the spread of the disease.

Although no human has yet to contract the disease from eating infected meat, that may not remain the case in the years to come.

What you need to know to stay safe

Now is the time to know what to do to avoid chronic wasting disease. Everyone should heed these warnings, especially hunters out in the field.

Study supports the reality that zombie disease could threaten humans

Although it was thought to not be a threat to humans for a long time, it is now becoming more likely that this could become a very real possibility. A study conducted at the Alberta Prion Research Institute recently found that the disease can spread to monkey’s who have eaten infected deer meat. The scariest part of all is that the monkeys chosen for the study have a genetic similarity to humans.