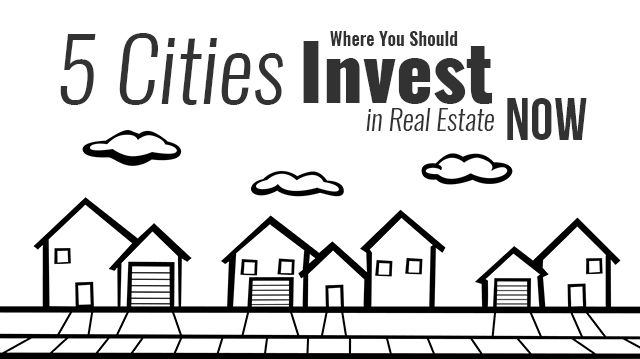 These cities have several factors in common. Prices aren’t sky-high — which is why New York City, Los Angeles and San Francisco aren’t on the list — but employment is steady and rising. Some of these cities were hit hard by the Great Recession and the foreclosure crisis, but are now bouncing back. There’s still a good supply of affordable housing for investors, and a healthy growth in value is expected. Relatively low home prices coupled with high rents make these cities attractive investment opportunities.

Grand Rapids offers affordable housing and boasts Heritage Hill, one of the largest urban historic districts in the US. The median age in the city is just 30, which translates to a large segment of the population looking for rental properties.

The Great Recession hit Las Vegas very hard. At one point, approximately 60 percent of homeowners either faced foreclosure or had underwater mortgages — a loan with a higher balance than the home was worth. Today, Las Vegas is on its way to recovery, but there are still plenty of great deals available for the real estate investor. The city’s job growth rate is booming, expected to reach 4.8 percent, compared to a national average of half that amount. All of those people need a place to live. Contrary to popular belief, there’s more to the city than gambling, entertainment and hotels. It’s also a top commercial and financial center for Southern Nevada. The mountains and conservation areas surrounding the city are a draw for nature enthusiasts, too.

Elvis loved it, and more and more people understand why. Its location on the Mississippi River has always made Memphis a magnet for commerce, and few cities have contributed as much to Southern culture. Today, it is home to nine Fortune 500 companies, including FedEx, AutoZone and International Paper. With all it has to offer, Memphis remains affordable, and that’s one reason so many young people are calling it home. The median home price is just under $100,000, making it a real estate bargain. It’s likely that median price will rise relatively quickly, however. The median age is just 33, a demographic teetering between renting and initial home buying.

The online residential real estate website Trulia reports that San Antonio saw the largest jump in the millennial population of any US metropolitan area between 2010 and 2013. Forbes puts it at number three on its “Best Buy Cities – Where to Invest in Housing in 2016.” The average home price is a reasonable $201,000, but prices are projected to grow by 26 percent over the next three years. The Great Recession didn’t hit the Lone Star State as badly as other regions, and although oil prices are down, San Antonio’s economy is diverse. The city’s yearly job growth rate is at 3.7 percent. That high job growth rate attracts newcomers, and these people need places to rent.

Florida was devastated by the Great Recession, and led the nation in foreclosures. Back in 2010, 15 percent of its homes were vacant — one out of six. Today, it’s coming back, and this Gulf Coast city is especially revitalized. Tampa has always been a top destination for young people, and that hasn’t changed. Tampa is growing at a similar rate to Grand Rapids, and foreclosed homes are rapidly being renovated and rented. The average home price is $193,000. Florida real estate in general is a good investment these days. A nationally improving economy means more vacationers and second home buyers are returning to Florida. That means an increase in service jobs, taken by people who generally rent. Other Sunshine State cities to consider for investment purposes include Orlando, Fort Lauderdale and Jacksonville.