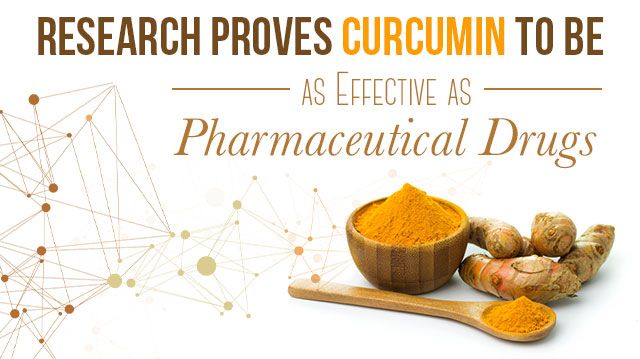 This herbaceous herb (also known as Curcuma longa) is a member of the ginger family, which has been used throughout India and the Orient for thousands of years. It tastes great when added to all sorts of culinary delights, such as rice, roasted vegetables, soups and teas. I even sprinkle some on my popcorn… yummy!

Historical records note that ancient Polynesians took turmeric with them when they sailed across the Pacific Ocean to Hawaii, where the spice is still used today and is known as ’olena.

In India, this golden spice has long been called “holy powder,” and is used extensively to treat infections, wounds and a myriad of other health problems. Its healing power was once thought of as only folklore; however, modern research is now confirming what the people of India and many parts of Asia have known for thousands of years — turmeric is a spice you don’t want to pass up.

Scientists are finding an astonishing array of antioxidant, anticancer, antiviral, antibiotic, antifungal and antibacterial properties. As an immune system booster, turmeric is five to eight times stronger than vitamin C and E.

Studies show that curcumin, the principal curcuminoid of turmeric, inserts itself into cell membranes where it does a little housecleaning and reorganizing, adding vibrancy to the cell itself. Suddenly a disorganized cell becomes organized, allowing information to flow through it so it can function more effectively. The result of this action increases the cell’s resistance to infection, malignancy and more!

Although acute inflammation is important as it fights foreign invaders and repairs damage, chronic inflammation is nothing short of disastrous because it begins to destroy the body’s own tissues. Research links chronic, low-level inflammation to almost all Western diseases, including cancer, metabolic syndrome, heart disease and Alzheimer’s.

FACT: Curcumin actually has a bioactive substance that tackles inflammation at the molecular level.

Most researched plant on the planet

By far, turmeric is one of the most extensively researched plants ever discovered by mankind. Most of its potent therapeutic value is found in its main component, curcumin. In fact, this humble little spice has been the star of well over 5600 peer-reviewed and published biomedical studies. These studies reveal over 600 potential preventive and therapeutic applications and an additional 175 or more beneficial physiological effects.

Here are just some of the researched areas where turmeric has proven to be effective:

What if I told you that curcumin was as effective as many popular pharmaceutical drugs? 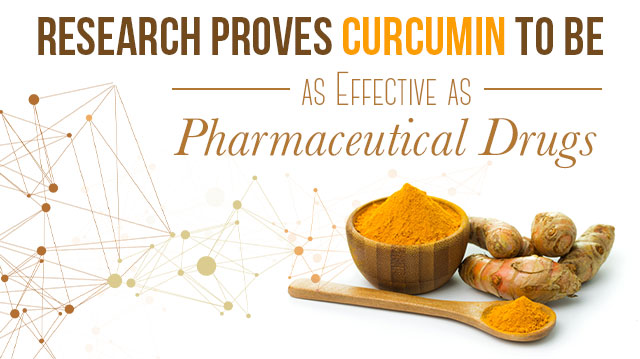 Over 70 percent of Americans take a prescription medication, many take more than one, and a good number take more than five different prescriptions. Of course, it is unlikely that you would walk out of your physician’s office with a note to start taking a good dose of curcuumin daily… unless your physician is a naturopath or an alternative health practioner of some kind. However, if truth be told, curcumin has been proven to be just as effective, if not more effective than a number of widely used pharmaceutical drugs.

Here are just some of them:

Corticosteroids: These man-made hormones mimic those produced by the adrenal glands and are often prescribed for a wide range of conditions caused by inflammation. Long-term use of corticosteroids has been linked to a number of side effects.

A study published in the Journal of Phytotherapy Research found that curcumin worked in a similar fashion to steroids in the management of chronic anterior uveitis (an inflammatory condition of the eye). Another study published in Critical Care Medicine found that in animal tests, curcumin worked as well as the corticosteroid drug dexamethasone for protecting against lung transplantation injury.

Antidepressants: Depression is a serious mental illness — one that affects more than 15 million adults in the U.S. For some women, pregnancy can bring about new depression symptoms, or worsen existing ones. However, before going to your doctor for an antidepressant prescription, you should know the very real risks that these drugs carry. A better alternative would be to work with your physician to find natural remedies, such as curcumin. A study published in the journal Acta Poloniae Pharmaceutica found that curcuumin compared closely to Prozac/Fluoxetine and Imipramine in reducing depressive behavior in animals.

Metformin (diabetes drug): Almost 30 million Americans have diabetes, and the American Diabetes Association tells us that 1.4 million more are diagnosed each year. Diabetes is the seventh leading cause of death in the United States, and disturbingly, prediabetes rates continue to escalate.

A study published in the journal Biochemistry and Biophysical Research Community found that curcuumin may be a viable option in the treatment of diabetes when compared to the commonly used drug metformin.

Lipitor/atorvastatin (cholesterol medication): More than 29 million people take Lipitor. Although this drug does lower cholesterol levels in the blood, new research indicates that it is associated with an increased risk of type 2 diabetes. In fact, in 2012, the U.S. Food and Drug Administration (FDA) put new safety warning labels on the drug indicating that it might be linked to diabetes. The label revisions included a warning that Lipitor and other statins could cause issues with the liver and muscles, and could also impair cognitive function.

Good news, a study published in the journal Drugs in R&D found that a preparation of curcuminoids from turmeric worked as well as atorvastatin (Lipitor) when used for endothelial dysfunction. The same preparation was found to be effective at reducing oxidative stress and inflammation in persons with diabetes.

Anti-inflammatory drugs: This class of drugs includes such things as aspirin, ibuprofen, phenylbutazone, naproxen, diclofenac, indomethacin, dexamethasone, tamoxifen and celecoxib. All of these are taken regularly by millions of Americans for pain and inflammation, but are not without side effects. The most common side effects of long-term use of these drugs include things like headaches, dizziness, drowsiness, constipation, diarrhea, rashes and vomiting. More serious side effects may include fluid retention, ulcers, liver and kidney failure.

In a study published in the journal Oncogene, curcumin was found to be as effective as the drugs listed above in reducing inflammation.

The studies listed above are not exhaustive. There is, in fact, an ever-increasing recognition from the scientific community regarding the effectiveness of curcumin in a number of specific therapeutic applications. This is why you should consider using this spice daily.

How much daily?
The recommended amount of turmeric depends on an individual’s age. According to the University of Maryland Medical Center, these are the recommended guidelines for adults:

Note: There is no safe medicinal amount for children; however, culinary doses are generally considered safe for any age. Keep in mind that turmeric can act as a blood thinner. If you are taking a blood thinner, it is important that you speak to your doctor before taking a turmeric supplement. If you are pregnant or breast-feeding, check with your physician also.