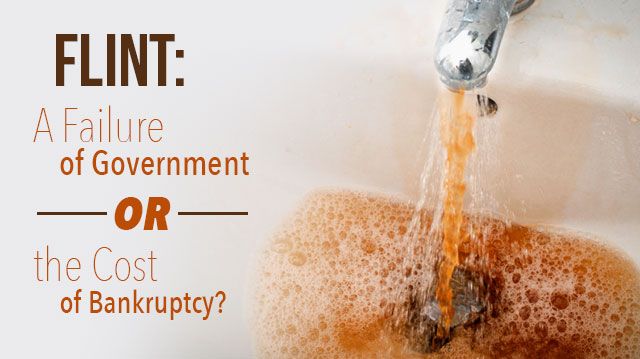 In April 2014, the state of Michigan switched the source of water flowing into Flint, Michigan, homes from Lake Huron to the Flint River. In addition to water that looked gross and smelled and tasted bad, Virginia Tech researchers have found the water to be highly corrosive and lead content in the water at poisonous levels. Despite the fact that the state switched the city back to the water supply of Lake Huron in October 2014, the damage has been done. Is this a failure of the government or just the cost of bankruptcy?

Experts have found two to three times the lead levels in toddlers since Flint’s water source was switched from Lake Huron in 2014, and the long-term effects are troubling. Lead poisoning can lead to memory and vision loss, skin lesions, hair loss, anxiety and depression. It can also negatively affect children’s IQ and contributes to learning disabilities. The future is bleak for many of these children, who may require mental health services or may end up in the justice system.

Where does the responsibility lie?

Michigan Governor Rick Snyder’s former chief of staff sent an email in September 2014 regarding the crisis in Flint. Dennis Muchmore’s email highlighted concerns over the politicization of the issue and claimed that the state of Michigan wasn’t solely responsible for the crisis.

“The DEQ (Department of Environmental Quality) and DCH (Department of Community Health) feel that some in Flint are taking the very sensitive issue of children’s exposure to lead and trying to turn it into a political football claiming the departments are underestimating the impacts on the populations and particularly trying to shift responsibility to the state,” wrote Muchmore.

“The real responsibility,” the former chief of staff wrote, “rests with the county, city and KWA (Karegnondi Water Authority), but since the issue here is the health of citizens and their children we’re taking a proactive approach putting DHHS (Department of Health and Human Services) out there as an educator.”

Muchmore continued by stating that the responsibility for clean water lies on the city itself, claiming the city’s water system “needs to deal with it.” He went on to write, “We’re throwing as much assistance as possible at the lead problem as regardless of what the levels, explanations or proposed solutions, the residents and particularly the poor need help to deal with it.”

It’s admirable that Muchmore acknowledged that underprivileged Flint residents need help, but back in July 2014, the city was considering filing for bankruptcy, similar to Detroit. As General Motors’ hometown, Flint also used to be home to some 200,000 residents, but like Detroit, a huge drop in population — and the abandonment of homes and businesses — was disastrous. Now about half of that number of people live in Flint.

As CBS Detroit reported last summer, the city is a mix of “hope and desolation.” Downtown is busy with thriving businesses and a branch of the University of Michigan, while just beyond the business district, “overgrown lots and boarded-up buildings creep in, and empty houses outnumber occupied ones in some residential areas.” So why isn’t the state helping the struggling city? The current reason is that it can’t afford to help.

Muchmore’s email was right about one thing: The Flint water crisis has become a political issue, just as he predicted. Governor Snyder is a Republican, so unsurprisingly, both Bernie Sanders and Hillary Clinton have spoken out against Snyder’s policies. According to CNN, Sanders has called for Snyder’s resignation. “A man who acts that irresponsibly should not stay in power,” said Sanders.

“I think every single American should be outraged,” Clinton said. “We have a city in the United States of America where the population, which is poor in many ways and majority African-American, has been drinking and bathing in lead-contaminated water. And the governor of that state acted as though he didn’t really care.”

Census data confirms Clinton’s characterization of the Michigan town: 56.6 percent of Flint residents are black, and 41.5 percent live below the poverty line. Both numbers are high compared to state and national rates.

Both Democratic hopefuls continue to be outspoken about the crisis. Clinton also made a point of tossing in a subtle jab at Sanders while she was at it. “Occasionally you go off the campaign trail,” the candidate said at a local New Hampshire Dunkin’ Donuts. “I know Senator Sanders went to New York to be on ‘SNL,’ and I’m going to Flint to see if we can help with the kids.”

Clinton is right that the kids in Flint need help, and we’d like to see others taking such an interest, perhaps from a less politically motivated standpoint.

Failure of the governor?

No matter what the issue is, Americans tend to claim that the government is the problem and not the solution. Snyder inherited problems when he came into office, and it’s questionable if anyone else could have done any better, but we can hope. He’s not winning anyone over at the moment: with Sanders and Clinton breathing down his neck, he’s making some high-profile personal decisions that seem to laugh in the face of Flint’s crisis.

Publications are calling the governor out for an extravagant cake he had made for his wife’s birthday — the dessert took 30 hours to make — and corresponding reservation at the high-end West End Grill. As The New Civil Rights Movement writer Jean Ann Esselink reported, the governor might not have received such ire over the cake if he hadn’t just told Flint residents that, “The state can’t afford to replace the water pipes that are leaching lead into their drinking water and poisoning their children.” According to the state’s website, Michigan does have a “Rainy Day Fund” which had a balance of $386.2 million as of September 2014, but apparently a rainy day doesn’t include lead poisoning.

The alternative, of course, is privatizing utilities. However, the move has been tried in other countries with mixed results. In Argentina, for example, where one of the largest privatization of utilities has taken place, child mortality rates decreased significantly in regions served by privatized water systems. Within months of privatization, rates for water service began to rise. That’s something that Flint residents can’t afford, yet they can’t afford unhealthy, lead-filled water, either.

Will we see a resolution to the water crisis in Flint before the presidential election? And if we don’t, will the next president address the issue? We can only hope, for the sake of Flint residents.

What are your thoughts on the Flint water crisis?