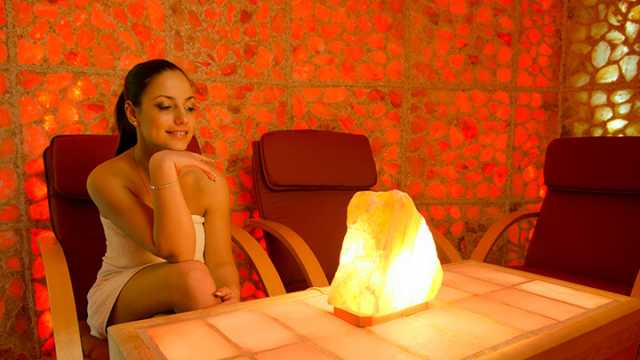 Perhaps you haven’t heard of salt therapy, but inhaling salt goes back to ancient times. In fact, the benefits of salt therapy were even noted in a book published in 1843 by Dr. Felix Boczkowski. Dr. Boczkowski, a physician at the Wieliczka salt mine in Poland, observed a curiously low incidence of respiratory conditions in salt miners. Today, dry salt therapy rooms are popping up all over the world. They are thought to alleviate symptoms of allergies, asthma, COPD, snoring, sleep apnea and more.

The history behind inhaling salt

Most of us have gargled with salt water or even used a neti pot from time to time. But, for some, the idea of inhaling salt sounds a little farfetched — maybe even a little bohemian. But the truth is, inhaling salt has a rich history that dates back to ancient Greece. Fast forward 1839. After observing the health benefits of salt-saturated air on miners with respiratory and pulmonary discomforts, Dr. Felix Boczkowski opened the first bath-house facilities in Wieliczka, Poland. His health clinic offered salt baths, salt-mud baths, sulphuric water baths and steam inhalations.

Later, his successor, Dr. Karl Hermann Spannagel also noted the health benefits of inhaling salt for those who had hid in a German salt cave during WWII to escape heavy bombing. Dr. Spannagel found that his patients’ coughing had subsided. Those with respiratory discomfort also breathed more easily.

Benefits of dry salt therapy on the respiratory system

Pink salt, or better-known as Himalayan crystal salt, is far superior to traditional iodized salt. Himalayan salt is millions of years old and pure. That means it’s untouched by toxins and pollutants that saturate other forms of ocean salt. However, before we discuss the benefits of inhaling pink salt, it’s important to mention that the act of inhaling refers to inhaling the dry salty air emitted from the salt. In no way are you “snorting” salt (like a drug) through the nostrils.

Dry salt therapy or inhaling pink salt is touted as a safe therapy that benefits respiratory ailments such as asthma and chronic obstructive pulmonary disease (COPD), suggests the Lung Institute (LLC). In fact, “Exhale,” the official blog of the Lung Institute reports that fans of salt therapy claim that the salt cleanses the respiratory system and speeds up the elimination of toxins. Salt particles penetrate deep into the lungs and treat damaged tissue, which may allow symptoms of respiratory conditions like emphysema and chronic bronchitis to subside for up to 12 months following salt therapy, says the LLC. Here is why:

A 2007 study looked at the effect of a dry salt inhaler in adults with COPD. Thirty-five COPD patients using a dry salt inhaler found significant improvement during a six-minute walk test and demonstrated an improvement in the quality of life. The study concluded that, while there doesn’t seem to be any adverse effects to using a salt inhaler, further studies are needed to exclude a placebo effect.

According to alternative health expert Dr. Edward Group, additional benefits for inhaling pink salt may include:

Note: While breathing pink salt is a natural alternative therapy that offers relief for respiratory symptoms, it is not a medical treatment.

Creating “salt mines” for the masses

In 1987, Russia constructed the first salt rooms using mined salt rock from deep underground. These Russian salt rooms recreated the microclimate of a salt cave in an aboveground clinic. Today salt rooms are popping up all over the country with promises of alleviating conditions such as:

Salt rooms work with each breath as particles penetrate deep into the lungs. There’s nothing to ingest and no invasive procedures. You simply relax on a chair and the micro-particles are inhaled during sessions that can last anywhere from 20 and 45 minutes. Dry salt is very absorbent and attracts pollutants and allergens throughout the respiratory tract. It’s thought to stimulate the body’s internal processes for cleansing the respiratory system. By simply breathing in and out the foreign particles are removed, strengthening respiratory function.

Although the practice of breathing pink salt is generally considered safe, one question still remains. Is there any harmful side effects from breathing in dry, salty air — even under spa or clinical settings? Too much sodium in your diet can cause your body to retain fluid, which increases blood pressure, suggests the Mayo Clinic.

But is breathing salt the same as consuming it? Proponents of this alternative salt therapy say no. Yet, a 2005 study published in the journal Environmental Health found that salt factory workers, who inhale large amounts of salt particles, are at a higher risk of developing hypertension. In fact, researchers suggest that breathing in large quantities of salt particles has the same effect on blood pressure as eating salty foods.

Researchers measured the blood pressure of workers in two salt milling factories in India. Workers were divided into two groups. One group worked close to the salt milling plant and was directly involved in crushing, grinding, milling and packing salt. The other group worked away from the plant and had less exposure to salt particles. According to the study, the first group of workers had significantly higher blood pressure than the second group who worked far away from the factory.

Workers from the first group also had an incidence of hypertension of 12.2 percent. The second group had an incidence of seven percent. Researchers found that wearing face masks and plastic goggles for four days caused the mean systolic blood pressure of workers from the first group to drop significantly — 127.8 mm Hg on the first day to 117.5 mm Hg on the fourth day.

And when it comes to using salt therapy for allergy and asthma relief, well, it seems that not all researchers are on the same page. A 2012 study conducted by the Division of Allergy-Immunology at Northwestern University in Chicago suggests that along with acupuncture, homeopathy and urine injections, salt therapy is controversial and unproven for treating allergic-immunologic conditions.

The bottom line: There is no cure for COPD, only medicines and therapies that alleviate symptoms. So, while there’s no real harm in trying a salt therapy spa or a pipe for inhaling pink salt, it’s hard to know whether the benefits are real or merely a placebo effect. More studies are needed to prove it’s therapeutical value. That said, trying could mean be believing, and believing could mean relief for some COPD sufferers. Before starting salt therapy, talk to your healthcare practitioner first — particularly if you suffer from high blood pressure.