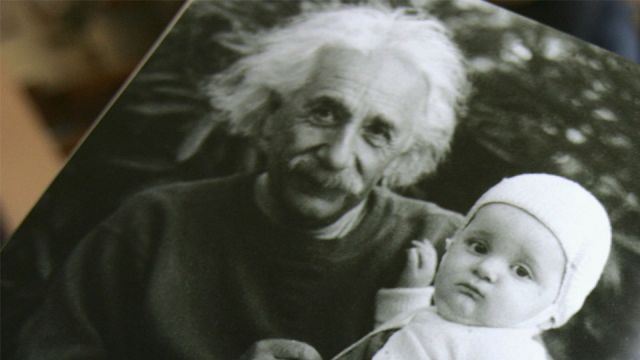 “A calm and humble life will bring more happiness than the pursuit of success and the constant restlessness that comes with it,” read one of the two notes that Albert Einstein wrote in place of a tip for a courier, when he didn’t have any money.

It was 1922, and the Nobel Prize winner and German-born physicist was in Tokyo on a lecture tour, just after hearing that he’d won the prize. The second note read, “Where there’s a will, there’s a way.” It sold for $240,000 at Winner’s auction in Jerusalem, while the first note sold for $1.56 million.

Back in 1922, Einstein told the courier that if he was lucky, the small handwritten notes would eventually become valuable. According to the BBC, the seller of the notes is reported to be a nephew of the courier, while one of the buyers wished to remain anonymous.

The opening bids for the notes were only set at $5,000, and auctioneers were surprised by the final selling prices. Previous letters or notes written by Einstein had sold recently for $210,000, total, with the most expensive of the set to Einstein’s former Princeton colleague, physicist David Bohm. That sold for $80,000.

Einstein is known for his scientific genius, but he also had strong political and philosophical views. He’s known for saying that imagination is more important than knowledge, and that “Common sense is nothing more than a deposit of prejudices laid down in the mind before you reach 18.”

“The ideals that have lighted my way, and time after time have given me new courage to face life cheerfully, have been Kindness, Beauty, and Truth…. The trite objects of human efforts — possessions, outward success, luxury — have always seemed to me contemptible, he also said.

“If you can’t explain it to a six-year-old, you don’t understand it yourself,” he argued. He was also not a fan of conformity, and insisted on wearing his hair and dressing how he wanted to. “Once you can accept the universe as matter expanding into nothing that is something, wearing stripes with plaid comes easy,” he said.