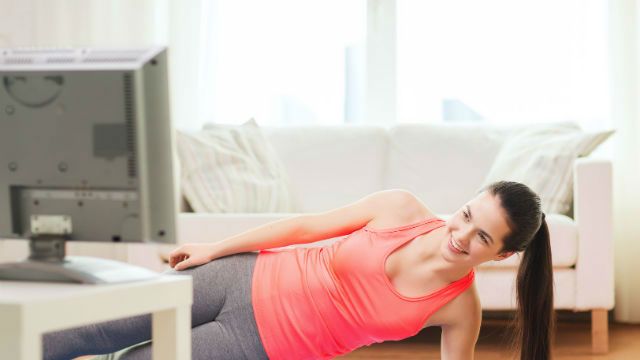 One of the best things you can do for your health is to throw out the television. Couch potatoes are not only subject to an increased risk of becoming obese, being sedentary has been shown to shorten life span and lead to a wide range of debilitating disease and illness.

Of course, many people can’t or just don’t want to break away from their favorite programs. If you can’t kick the addiction, do the next best thing and stay active while watching by using one or more of these ideas.

Turn it into a game

Use a character in your favorite show to help you keep moving. For example, “How I Met Your Mother” fans might do push-ups every time Barney says, “legendary.” Or consider doing an activity every time a television character utters an offensive comment or a bad joke. You could alternate the exercise each time, starting with the push-ups, followed by squats, lunges, and crunches.

Use your exercise equipment while watching

Many people have a piece of exercise equipment sitting in the garage or the basement sitting unused. If you’re one of them, move it into the room where you watch television, or even better, right in front of the TV. That will force you to get on it and get moving while watching.
Invest in exercise DVDs

If you’re addicted to looking at the screen, but not necessarily a particular show, buy some exercise DVDs and make better use of the television by working out to them. If you’re stretched for cash, you’ll find plenty of daily exercise shows available on TV for free that can serve the same purpose.

Lift hand weights from the couch

For those that can’t seem to get up off the couch, at least consider having a pair of hand weights nearby so that you can grab them and strengthen and tone your arms. While it’s not the best workout, it’s certainly better than not moving at all. Start out with light weights, but gradually move up to heavier dumbbells to build muscle and burn a few extra calories.

If you’re afraid exercising might distract you from watching your show, workout during the commercials instead. Make it fun by assigning activities based on what type of commercial airs. For example, you might jog in place during a car commercial or perform 20 jumping 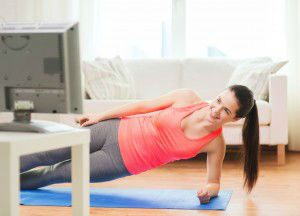 jacks during a commercial for food. Come up with a long list based on commercials that usually play during your favorite programs.

Sit on an exercise ball instead of the couch

Exercise balls aren’t expensive and they can even be fun to use. By sitting on one instead of the couch, it can help improve your posture. Just be sure to sit upright with your feet flat on the floor, about shoulder width apart. Ideally, you should sneak in a few calorie burning exercises such as wall squats, but just using the ball to is said to burn 6 percent more calories.

Whatever you do, don’t just sit there, get moving!